Is FDI a panacea for the economic evils of India?

FDI refers to the investment made by a person or a company in another country. Most countries in general and emerging economies in particular crave for Foreign Direct Investment with a view to seek solutions to their economic malaise and India is no exception to this. Governments are incurring huge sums of money in order to create awareness amongst potential investors about the investment opportunities that are up for grabs in their respective countries.  A slew of incentives are dangled to attract the investors and these include processing of licenses at lightening speed, tax holidays, tax concessions, free land and unrestricted remittances and unconditional guarantees.  Interestingly, it is not uncommon for various states in a country competing against each other for attracting FDI.

Most foreign investors get attracted to countries with excellent infrastructure facilities such as road and rail network; cheap and uninterrupted power supply; legal and financial framework; abundant skilled labour force at affordable cost; availability of natural resources; respect for rule of law; political stability etc. If properly harnessed, FDI can make a difference to our economic growth, as we do not possess adequate financial resources. This explains why our Honourable Prime Minister Shri Narendra Modi has been making frequent foreign visits to woo foreign investors.  In a number of industries the cap on FDI has been increased to as high as 100%.

FDI is not the only means to get investment from investors of other countries. Foreign investors may also pump in money in other countries through their institutional investors, known as Foreign Institutional Investment (FII), who buy shares and bonds in listed companies.  However, this type of investment is susceptible for sudden withdrawal if the stock markets are bearish, thus adding more pressure to depressed markets.  Similarly, they also exit and take their money elsewhere, if they find better investment opportunities.

When compared to FII, FDI is carrying the present day as it results in creation of additional activity in the host country. At the same time, it will result in creation of employment opportunities. That’s why emerging economies such as China and India are keen to attract as much FDI as possible.

FDI is often perceived as an engine of rapid growth for the following reasons:

61. FDI results in creation of additional goods & services in the host country, which in turn will make the Gross Domestic Product (GDP) to take an up swing.

2. Employment opportunities will be created for the thousands of unemployed youth who have been patiently waiting for the opportunity to be financially independent.  This may lead to a reduction in the yawning gap between the haves and the have-nots.

3. Favorable impact on Balance of Payments (BOP) is another positive aspect of FDI. This may occur in many ways – money brought in by foreign investors, possible reduction in imports due to import substitution, increase in exports etc.

5. Taxes levied on income made by a foreign investor are as high as 40% in India (in case of corporate). Thus, it results in additional revenue to the government and beef up the national coffers.

6. Transfer of cutting-edge technology over a period of time.

Despite several advantages associated with FDI, some countries with a socialistic bias do not support it for the following reasons:

2. Most of the foreign investors don’t comply with environmental and other laws in the host country. In that way, they cause environmental degradation.

3. Foreign investors come up with latest technology available in the market. Because of this, machines will replace men and expected employment generation due to FDI may not take place on expected scale.  Further, the critics of FDI claim that even the few employment opportunities created are for low-level jobs.

5. These investors will form into elite groups of crony capitalism and will be in a position to dictate terms to the Government of host country. This will result in the risk for sovereignty.

It is for some of the above reasons the involvement of FDI in retail sector on a larger scale became a bone of contention not long ago and the government had to be on the book foot.

A cursory glance at the above chart reveals that FDIs in India have been on an increasing trend over the last decade. One of the contributing factors for this positive development is the fact that Government from time to time makes changes its policies in favour of FDI. In the present financial year also i.e. vide Budget-2016; Government has liberalized its policy towards FDI in Insurance and Pension Sectors (foreign investment will be allowed through automatic route up to 49 percent which earlier used to be 26 percent). A week ago the government announced further FDI reforms, allowing up to 100 per cent FDI in Aviation, 74 per cent in Pharma and 100 per cent in Defence through the approval route while clearing FDI in cable TV and brownfield airports through the automatic route. I strongly believe that these changes prove to be a step in the right direction for the nation’s well being.

Most commentators think that India is lagging far behind China, despite the latter’s poor record in human rights violation and language barrier, in attracting FDI.  The most commonly cited reasons for India’s failure to get the most sought-after FDI are bureaucratic delays in obtaining licenses (License Raj), high levels of corruption, uncertain policies and lack of required infrastructure.  The first issue has been addressed by having a ‘single window’ system. The issue of corruption is very sensitive and it requires a paradigm shift in the people’s mindset, especially those in positions of power.  Infrastructure development cannot be addressed overnight, as it requires not only colossal sums of money but also time.  On the policy front, what spoiled the party for India was the imposition of taxes on a retrospective basis.  If these issues can be addressed sooner than later, one would expect India becoming the most favoured destination for FDI overtaking China in the not-too-distant future. 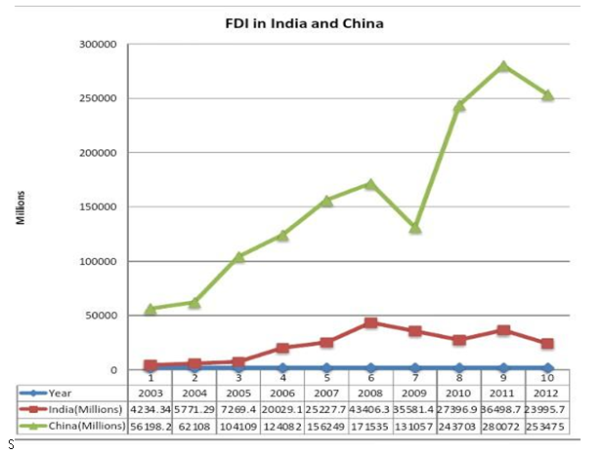 The above diagram compares India and China in terms of FDI over the period of 2003-2012. It is evident that China was miles away from India and this issue should be addressed with the importance it deserves. I hope that the recent statistics suggest a better picture for India, thanks to several measures and booster shots given by the present government.

Even though there are many problems associated with FDI, it is considered the preferred choice by many a government as the benefits from it far outweigh demerits. India, having 60% of its population as youth, needs injection of huge amounts of investment to accommodate its ever-growing and skyrocketing working population. Thus by bringing in FDI, the economic activity can be increased substantially in our country and at the same time, problem of unemployment (which is considered as one of the root causes of poverty and unrest) can be reduced. Hence, proper utilization of FDI may act as a panacea for the problems that our country is currently grappling with.