Is Chinese Yuan the next reserve currency?


The very basic desire of human being is to satisfy the ever increasing demand. This want created a mechanism where we exchange our goods and services for the goods and services that we need. This is called ‘Trade’. There is here since the very existence of human being. However the medium of exchange for that trade has been changed dramatically throughout history. In Vedic India, it used to be ox or cows. Then people started using horses, sheep and even salt. Then came the era of metal currencies where gold and silver is being used to exchange goods and services among each other. Now we are living in the world where we use bank notes or paper notes printed by the central bank or the government of the country in which we are residing. This mechanism is working fine as far as we need goods or services produced within the territory of the country and once we need the goods or services not available with own country, there arises problems. 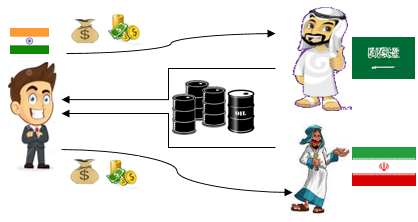 The biggest issue that comes is that how we are going to pay for those products or services as the note printed by one country may not be accepted by other country. Then nations used gold for the purpose of international trade where they used to pay gold for the imports they made from other country. This method worked for some time but as the international trade increased, the holding, transportation and settlement of gold became an extremely difficult task. Moreover the limited availability of gold stock created serious issues and a period of ‘gold rush’ came where countries started to locate and mine gold like crazy. Particularly after Second World War, as Europe & Japan were completely destroyed, their infrastructure, factories and educational institutions all badly damaged, America emerged the biggest economic power of that time and by far the largest economy in the planet. Other countries pegged their currencies against the USD ($) and the Dollar Era started. Since then USD ($) became the primary reserve currency which is being used in the majority of global business deals. As we all know, if any nation imports anything from other nation, that other nation insist to make the payment in USD (see the image). USD is still the undisputed king of currencies, but Yuan is challenging its status as a potential replacer of global economic system. 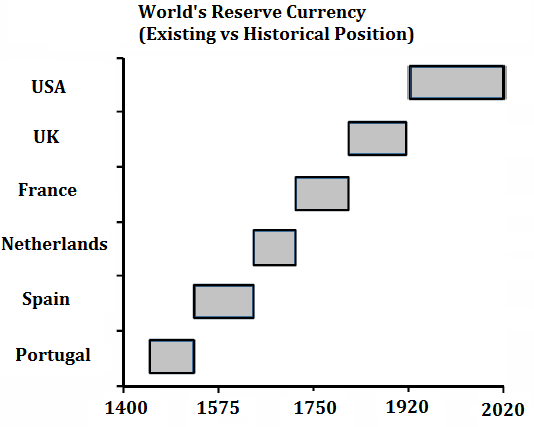 Though the term reserve currency became more prominent after WW-II, but if we go into the history a bit, we can see that reserve currency system is there from 1450’s (see the image). The first nation which is being credited for having its currency as reserve currency is Portugal. Then came Spain followed by Netherlands and France. This was the era when nations were concurring each other like France rules some African Nations for quite long time. So basically in this period, the use of nation’s currency as reserve currency was very restricted upto those nations which were under the control of ruling nations. Then came the era of United Kingdom and its currency Pound Sterling was the first true reserve currency which was being used not only those nations under British rule but also other nations for international trade. However after Second World War, Britain suffered significant damages which not only reduced its economy but also made Britain less powerful both militarily and diplomatically across the globe. This caused Pound to lose its status of reserve currency to United States and Britain still could not achieved it back. This was the time when US economy was on boom and eventually US became the one and only super power of the world.

Can Chinese Yuan replace American Dollar from the top slot

Now this is the question which is a very hot debate topic from a decade in all business schools and economic institutions Lot of countries created special think tanks to have a proper analysis of this possibility. China and America is totally incomparable in some parameters like the population of China is 4 times that of United Stated but its land mass is approximately equal that of America. We gathered some data comparing China with America (see the image). On comparison, we can see that the GDP of America is almost twice that of China, but despite the fact the Chinese economy is half of the size of America, it exported more goods and services than the United States in 2014. As the exports of Chinese is more than that of United States, this is sufficient to put a dent into the crown of USD. Take a look on the following developments happened recently which is posing a threat for 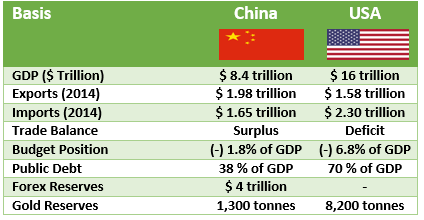 I. China and Japan Are Dumping the U.S. Dollar in Bilateral Trade among each other

According to a report published in BBC, China and Japan have unveiled plans to promote direct exchange of their currencies in a bid to cut costs for companies and boost bilateral trade. The deal will allow firms to convert the Chinese and Japanese currencies directly into each other. Currently businesses in both countries need to buy US dollars before converting them into the desired currency, adding extra costs.

Russia is the biggest producer of energy resources and China is the biggest producer of all consumer as well as durable goods, light, medium and heavy machineries and countless other things. In order to limit the USD among them, Russia and China have been using their own national currencies when trading with each other for more than a year now. Leaders from both Russia and China have been strongly advocating for a new global reserve currency for several years, and both nations seem determined to break the power that the U.S. dollar has over international trade.

In 2009, China became Africa's biggest trading partner, and China is now aggressively seeking to expand the use of Chinese currency in the African continent. A report from Africa’s largest bank, Standard Bank, recently stated that ‘We expect at least $100 billion (about R768 billion) in Sino-African trade, more than the total bilateral trade between China and Africa in 2010 – to be settled in the Yuan by 2015’.

IV. BRICS considering to use their own currencies among trade with each other

According to Zee Business, The five major emerging economies of BRICS -- Brazil, Russia, India, China and South Africa -- are set to inject greater economic momentum into their grouping by signing two pacts for promoting intra-BRICS trade at the fourth summit of their leaders here Thursday. The two agreements that will enable credit facility in local currency for businesses of BRICS countries will be signed in the presence of the leaders of the five countries, Sudhir Vyas, secretary (economic relations) in the external affairs ministry, told reporters here. The pacts are expected to scale up intra-BRICS trade which has been growing at the rate of 28 percent over the last few years, but at $230 billion, remains much below the potential of the five economic powerhouses.

V. India and China to use own currencies with Iran

As per recent pacts signed between India and Iran, both the countries are planning to replace USD from the trade between them. This is however not an easy task and would need lot of hurdles to be removed. In the same way, China and Iran are also considering to use Yuan as the payment of oil bills imported from Iran.

Though the exact impact on India due to the globalization of Yuan is difficult to assess but one thing is for sure that the impact by large may not be very positive and the prime reason behind this is the mentality of China in which it considers India as the potential threat for itself in Asia and the World. As per China, India is standing in its way of becoming another superpower like it is not already a super power and because of this, China gives continuous anti-Indian signals by its acts which includes claiming Arunachal as South Tibet, illegal intrusion into India, precluding ONGC from oil exploration in Indian Ocean, kidnapping villagers living in villages attached with borders, helping Pakistan militarily and so on. On the other hand, it is also a fact that the bilateral trade is rapidly growing between India and China and if these two nations can remove the mutual differences between them, it will not only mitigate the negative impact of Yuan Internationalization but also prove extremely beneficial for the world.

Though the globalization of Yuan to that extent that it would replace USD is a wild dream beyond reality, but it is certain that the role of Yuan will become more and more important not only in the global settlement system but also in the form of multinational investments, reserves, aids and donations etc. American Dollar is not in the direct threat due to rise of Yuan but other reserves currencies like Japanese Yen, British Pound and Euro would see more decline in their use for the international payment and settlement systems. As far as India is concerned, it is a very old saying that you can’t stop the growth from happening, it will happen anyway. What you can do is to move yourself too with the pace of growth. So India should understand this mantra and try to reach the pace of Chinese economic growth.