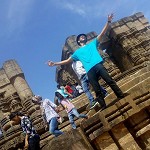 Many of us, start preparing late. Or even if we start early, it takes time to create a flow to get into that thing. Mostly people are confident of giving both groups when they start preparing.

Eventually, they fill the form of both groups. So this is especially for those who are unable to decide whether to give both groups or not. We are often faced with this question may be 2 or 2.5 months before the exams.

As exams come nearer, our focus increases much more on group 1 and eventually focus on group 2 reduces. It happened with me and it happens with most of us.

At this point, we’ll see two types of people. People who want to clear the exams no matter what as - Category 1 and the other ones who have a target of just passing as - Category 2. I did not include people who want to score good since they always have a balanced preparation. Most of them start excluding Group 2 out of their study plans, saying “ki nahi hoga group 2.”

So whatever time they have left, the target reduces to just Group 1. This gives an apparent feel that now I have sufficient time for group 1 subjects & so their schedule relaxes.

If you feel you’ve been doing this, did you ever wonder what if your schedule could have been just a bit more stringent? See, managing both groups is ultimately upto you. It takes a lot of conviction. And at the end, trust me, it's only a matter of conviction.

If you convince your mind, “ki nahi mera target both groups hai, I want articleship in a good firm, I want to do it & I will do it,” Group 2 stays in your study plan. Your friends will start excluding Group 2, some even say that “baar nahi hoga: next time”, but you won’t!

You’ll see your friends completing Group 1 subjects as you are (maybe) left behind doing, Group 2.
But take this as a challenge, dono groups karna hai and I want to do better than my friends.
They’re studying 10 hours and doing Group 1. I’ll study 16 hours and attempt both the groups.

Competitive spirit reflects a lot in your overall preparation & performance.
People do study 18 hours in the last month. So, If they can, why can’t I? And why just study 10-12 hours and limit your target to Group 1. Maybe just study 5 hours more & have group 2 cleared as well?

I had at least around 5 of out 10 good friends who filled the form of Group 2 but ended up giving only group 1.

And then the other thing, people hear “16 hours padhna padega and feel that this isn’t just me.” They start fearing, 16 hours is not for me. “Mere liye possible nahi hai.” And then, when you hear your friends putting in so much of efforts, you embark on the option of dropping the second group. Somehow you want to secure just pass marks.

You don't have to think that I'm studying so much! You just have to keep studying, keep enjoying it. “Fear is the first reason for failure” Yes it is indeed. There’s absolutely no reason to fear.

Fear will only make you see the negative, restrict your potential. “Ye soch ke padhoge ki nahi ho raha mere se, toh obviously nahi hoga.” You’ll only see yourself performing lesser than what you never knew what you could have done. You have to be determined! And then next, you must enjoy learning.

"And what if I fail?" You just don’t need the answer to this question at the present moment. This moment is for studying. So, if you have this question in your mind, drive it away. Results come after the exams. And whatever be the results, be bold enough to face them. If you couldn't, maybe better luck next time. But that doesn’t mean that you put in less efforts while you are preparing.

So, on a personal note I’ll say that if your preparation has been fair, keep Group 2 in your targets. Do not exclude it. You, yourself, will find a way to get the job done.And then if you still think that you want to give just Group 1, do it. Respect it as your decision. Do not give further thought. Remember, the ultimate decision is always yours.

“Sometimes the greatest strength can be found in how you understand & confront your biggest weaknesses.”