Inflation- Still too big to ignore

. To attract growth, it is essential to have an environment free from uncertainties and when inflation ranges between 7-9%, this creates a situation of monetary panic and makes currency more volatile in the currency market.  So, to build a foundation of growth, it is necessary to keep inflation under control. In a recent press conference, the governor of Reserve Bank of India, Raghu Ram Rajan said "We still have concerns over inflation. So, given the deflationary environment elsewhere, it is actually easier for us

because we are not fighting inflation in an environment where inflation is picking up elsewhere. I think we are still in conventional monetary policy territory”. Too high inflation may prove as the single biggest obstacle in pushing the growth up as to accelerate growth, country may have to raise money supply and if there is inflationary pressures, the increased money supply will act as fuel for the inflation and would trigger a very high rate of inflation. The Reserve Bank of India is very much concerned about the inflation and we can see this from the interview given to a leading financial newspaper by the Governor of RBI. "People say we have won the war on inflation. I am not so confident. What we need to aim for is that if there are supply shocks in future, they don't increase inflationary expectations. We should be able to see through those shocks. That is when I would say we have won”.

According to Nobel Economist Paul Krugman, inflation is always created by the Central Bank. This is true for the developed economies but for developing nations particularly India, this statement may not fit properly as in

India’s case, it is structural issues which is the reason behind such a  high inflation not the excess money printed by the Reserve Bank of India. Indian Central Bank is among most conservative central banks in the world and is often regarded as the best institution of the country. More over Raghu Ram Rajan, the current governor of RBI is more caution about the inflation in the country

and in his short tenure, he raised policy rates from 7.25% to 8% before reducing it to 7.5% recently. Raghu Ram Rajan always pointed at the too high inflation for raising the benchmark rates. As per him, India is the only major economy in the world which has inflation ranging from 7-9%. He added, you can’t make the economy grow when there is such a high inflation. High inflation makes the currency volatile and creates an uncertainty in the investment environment. Now, as RBI increases the policy rates, it makes the money borrowing very costly and thus have a direct imoact on the borrowing power of the nation. Less borrowing means lower rate of growth and which is totally in contradiction with the agenda of Modi Government. Hence, after the ner government taken the office, media frequently speculated about the possible rift between the RBI and the Central Government. However both side always denied about the possibility of any such differences In opinions. Very recentry, the Indian government and the Reserve Bank of India (or RBI) have set an inflation target under 6% by January 2016. Further, inflation will need to be within 2% to 6% band from 2016-17 (April 2016 to March 2017). Any deviation for three consecutive quarters will have to be explained by RBI as it would be treated as a "failure" by the central bank to target inflation. And in case of a failure, RBI will have to specify the reasons, suggest remedial actions and estimate the time period within which the target will be achieved once 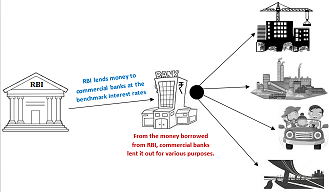 the corrective steps are implemented. With this agreement, RBI has joined the group of central banks like the US Federal Reserve and European Central Bank which have inflation targeting as their main objective. However, at the insistence of the finance ministry the agreement also said the objective "is to primarily maintain price stability, while keeping in mind the objective of growth". However the former RBI Governor always stand against for any such inflation targets as he stated that the two main components of inflation fuel and food were driven more by supply-side factors with RBI has little or no role to play. Now this would be very interesting to see that how RBI achieves these targets.

Food Inflation is the prime reason of concern in India as the common Indian is hardest hit by the rising food prices. The UPA -2 was heavily criticized for its failure to keep food inflation under control. Food inflation remained consistently high and even reached double digits for some time. Now, the reason behind such a high food inflation is not that India produces less food for its population, but the main constraint areas are the storage and distribution of the food stock. According to a recent research report, “India produces enough food to feed its population but fails to manage its storage and distribution. The post harvest losses are estimated around Rs.44,000 Crores every year. The wastage in fruit and vegetables are 18%, while the wastage in cereals are between 4% and 6%. The Food Corporation of India has a history of storing excess stocks that lead to food grain losses both in terms of wastage and spoilage”. More over there are two developments happened recently which might increase the food inflation:

I. Recently, the Indian government hiked rail freight rates for 12 commodities in the range of 0.8% to 10%. The freight hike will increase the revenue of Indian Railways by Rs.4,000 crores approx. However, the hike will also raise the prices of essential commodities including food grains, pulses, kerosene, LPG, cement, coal, and steel.

II. The recent hailstorm in some of the states caused serious damage of various crops, spices and other food stuffs. This unseasonal rain may cause deficit of food stuffs in the country. Union Agriculture Minister Radha Mohan Singh said "For now, we are still conducting the panchnama of the crops that have been battered by the unseasonal rains. This should be done by March 31. Soon after that, we will start disbursing the financial aid”. So these untimly rain brought two damages one in the form of destroyed crops and another in the form of financial aid to be paid by the government.

On the other hand, Central Government told the Supreme Court recently that it would not be able to enhance the minimum support price (MSP) for agricultural produce to be 50% more than the input cost. It shall be also kept in mind that the UPA-2 government raised the MSP for rice at the rate of 11% and for wheat, at the rate of 14%. Now the decision of Modi Government of keeping the MSP not upto 150% of the input cost has both positive as well as negative effect. The positive side is that it would keep food inflation under control but the negative side is that it may aggravate farmers across the country.

India imports approx 80% of the fuel it needs. The recent decline in crude oil prices was like a jackpot winning for the new government.  There is a direct connection between the prices of crude oil and inflation level in the country and with such a sharpe decline in crude oil prices (approx 60% from their peak level), inflation shall also reduce sharply. Despite such a sharpe decline in oil prices, (approx 60%), the retail oil prices in India got a rate cut only in the range of 15-25%. Now for some people it may be shocking but if we look at the fiscal deficit position of the country, things will get little simpler. For the

financial year 2014-15, Central Government kept a fiscal deficit target of 4.1% of the GDP. Latest data by the Controller General of Accounts shows that deficit during April-January was Rs.568,000 crore as against the annual budget estimate of Rs.531,000 crore, thereby reaching 107 percent of the estimate in the first 10 months compared to 98.2 percent during the corresponding period of the previous fiscal. The deficit had already crossed 100 percent of the estimate in the first nine months during April-December itself, at Rs.532,000 crore. The Indian government has been raising taxes on petroleum products to contain its fiscal deficit and recently it raised the price of petrol by Rs.3.18 per liter and prices of diesal by 3.09 per liter. This will prevent sharp fall in pertolium prices and keep inflation up in the coming

months. The finance ministry has set the budget deficit target for the upcoming years and finance minister Arun Jaitley has expressed his serious commitments in achieving those targets. "I will complete the journey to a fiscal deficit of three percent in three years, rather than the two years envisaged previously," Jaitley told the Lok Sabha while presenting the NDA government's first full budget. So the thing we can conclude is that as long as the Central Governmnnt is not able to achieve its fiscal bugdet deficit target, the further reduction in petroliun prices may not be done and without the sharp reduction in oil prices, the target inflation set by RBI might be a very challenging task to achieve.

THE TRAP WITH HEAVY INDUSTRIES

It is the heavy industries which makes a nation rich or keeps it poor. Unlike in Europe, United States or Japan, India never seen any kind of Industrial revolution and thus India became an economy where more than 80% of its population has the primary work in agriculture sector. Even today, more than 50% of work force in India is

population turned India into a total consumer nation which has resulted into an ever increasing trade deficit with China. So the most important thing which our government should work upon is building a solid industrial base in the country. Only when India would have a solid industrial base, it would be able to reduce the youth unemployment as well can keep the inflation under control.

However the matter of relief is that Whole sale Price Index (WPI) fallen sharply in last few months and even became negative. As per latest data, it was (-)2.06% in the month of February.  Now as the WPI has fallen and even became negative, RBI also reacted by cutting the benchmark interest rate by 25 basis points. As per ASSOCHAM President Rana Kapoor, The situation demands urgent action to boost industrial and consumer demand and lowering of interest rates and easy credit availability should be the top priorities of government and

RBI. Re-energising of the manufacturing sector is imperative and the overall focus must now shift to reviving GDP expansion, industrial growth, boosting consumer and investor sentiments.

Reducing the inflation and keeping it at the lower levels is a challenging task which would need a coordinated effort both from RBI and Central Government. To revive growth, money has to made cheapen and this needs reduction in the benchmark interest rates, but at the same time there is a risk of inflation. As a matter of conclusion, we can list following points to be taken care of in this regard:

I. Central Government has to work in coordination with the industry to revive the business sentiments and making India a more attractive place for starting and running a business.

II. Building a solid industrial base in the country.

III. The structural issues like corruption, poor infrastructure etc, are also needed to addressed and removed over the period of time.

By taking care of these points, India can achieve a permanent lower rates of inflation thereby having more room towards lowering the benchmark rates in the future.