Quick money and quick return has increased the demand of Private Equity and Venture Capitalist to flood opens the gates of investments. Every one is scouting to find quick gains from investments. Investments in those projects where the government regulations will be low followed with less tax and more income generating avenues. Projects are designed accordingly where mouthwatering returns are being planned to attract the bees called Private Equity and Venture capitalist. We all the know the mechanism of how the Private Equity in Indian economy works out. One of the prominent ways of exit is either through Pre IPO exit or through IPO exit.

If we look historically we will get the proof of the demand of private equity and vc funds that had grown through the number of IPOs those came within the past decade. I will give a simple data of the number of IPOs came from 2001 to 2011.In the this below data you will find that from the period of 2004 to 2007 was the period where the Indian primary market was flooded with IPO. Now this is an separate ball game that majority of the IPO have astronomically returns in the initially days and later on hanged up. One of the prominent reasons is the exit of VC, PE and institutional investors. These institutional investors are the native of any other planet. They are the modified version of investors who reap benefits at the cost of retail investors. 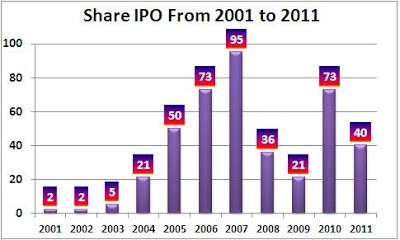 But after ruling for an decade its now being witnessed that the market are flooded with VC and PE and now the numbers have grown up so much that we will find them sitting at every corner of the road. I find that there is going to be a huge turn around in their society in the form of mergers and shut down of ventures. In other words consolidation for the industry is about to begin. I find my community that is Cost Accountants have also come up with similar business model providing funding arrangements for projects. Reason quick money can be earned from being an intermediary between the project and the investor. But after ruling for a decade and when we all know that Indian economy is now being acclaimed as an emerging economy why we are going to witness consolidation.
Prime reasons is quick money formula is now available in the news papers which in the previous ten years remained a secret code. Indian economic situation, policy lags, delay is process of execution due to red tape policies and multiple and high level of greed has opened d the gate of consolidation. Current situation of the industry has resulted dead in IPO exit which is the most important return generating form. VC, PE are not finding the desired return and will falter in delivering back the owners of the original fund with the desired return.
In the year of 2006 I find many PE finding easy ways to raise funds now it has become a tough job. Within the next 12-18 months, many PE firms, mostly the newer ones will be scouting to exit from raising funds. In September 2006, PE firm Everstone Capital raised its first $425 million fund in barely 90 days. But it spent a year closing its second $550 million fund in March this year. They find the difficulty not in the slow process of Indian red tape movements alone. Returns a form value based project has also declined backed by stiff competition after 2008 debacle.PE and VC are scouting for lucrative sectors where govt. regulations are less and wealth can be maximized. Most importantly the exit route of PE and VC needs to be changed. With the decline in Indian stock market performance IPO will find its place very hard to find a proper valuation. Buying quality assets have become an fierce game. But if we look globally we are finding more overseas portfolio of VC and PE are looking forward to Indian markets making the deal tough for domestic PE and VC. At home consolidation is about to begin.