In generally incremental GDP may give a notion that economy is growing healthily. However there is no principle stating to consider as economy is growing healthily. To understand whether GDP increase indicates the healthy growth of the economy or not, this article may be helpful. I also made an attempt to assess what might be the alternative for healthy growth. This article also helps in understanding required growth in GDP to ensure required Economy was not declining.  As per the statistics available, poverty was decreasing in India. And it might be shown as follows

If poverty was decreasing, then increase in Per Capita GDP may need to be higher than increase in inflation. To examine this short analysis of the same from the other point of view about poverty. Following are the data considered for this purpose.

Values in column “Per Capita GDP in USD” is considered from www.tradingeconomics.com . Values in the column “Cost of Inflation Index (CII)” as per the inflation figures applicable for income tax purpose.

In the above table, values in the year 2006 are assumed as 100% for the purpose of understanding. And accordingly percentage for the rest of the years are calculated on the same basis. Considering column A and B line chart will appear as follows.

Chart 2 : Per Capita GDP Vs Cost of Inflation Index 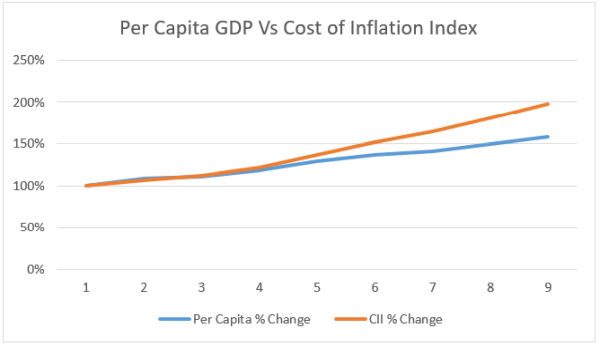 In the above chart Per Capita GDP was always below the inflation line. Even GDP has increased every year, it may not able to commensurate with increase in population and inflation. In simple terms one may say that Real Per Capita GDP has almost not increased after the year 2006.

If we consider column C of the table i.e. % Difference between A and B column. One may say it as deficit in Per Capita GDP growth required to commensurate with changes in population and inflation. The following may be the trend it will appear 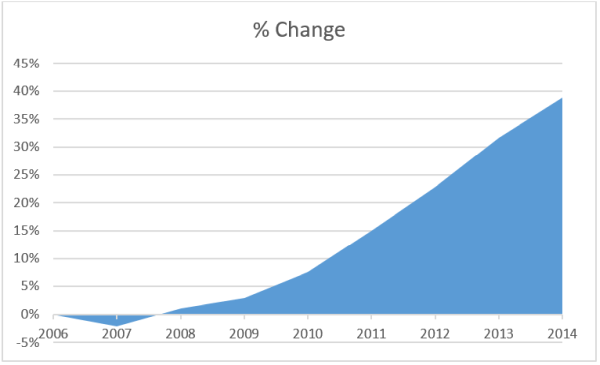 In the above chart positive increasing trends depicts increasing deficit percentage change of per capita GDP over percentage of Cost of Inflation change. If line was below 0%, then one may say Real Per Capita GDP has increased ( For example in the year 2007 of the “Chart 3”) and vice versa.

In crux, The line indicated in the above chart is in increasing trend. Hence one may not possible to say poverty was decreasing. “Chart 1” depicted may also not reliable or unequal income groups are going to very extremes. And poverty may not decreasing but increasing in India. One may say GDP in India is decreased or decreasing and in spite of such fact India may be a developing country. Hence one may need to looked into alternatives available to make country developing or developed other than focusing on GDP.

If focus on developing business and increasing GDP are increased, then it may pressure to improve investments in India and develop business. For example assume that Mr.X got employment opportunity due to such investment which will fetch Rs.500/- per day as income to him. The person who engage Mr.X may not charge to less than Rs.500/- for the output, employer providing to the customer/consumer. However due to inflation all the cost per day to Mr.A may also exceed Rs.500/-. Such cycle will continue. It was an open fact that when two things are interrelated one of such is thing is a scarce resource, then such scarce resource will have high demand and value. If population is high and resources are less then value will go high for resources and inflation will increase. To resolve the problem, one may need to focus on increasing the value of each individual in the population. It is possible to increase the skill of each individual in India to the rest of the world by improve the technical standards and quality of education and skills. Rather than focusing on business development, focus on improve technical standards of education system and skills may be an important point to consider. If such improvement is happened, then automatically demand for Indians will increase and the value of money paid to Indians may also be higher than they spent as expenses.