India's GST one of the most complex: World Bank Report

While implementing the new indirect taxation regime, Prime Minister said it's going to be Good & Simple Tax. However, World Bank as per their latest report begs to differ.

The goods and services tax (GST) implemented from 1 July last year is one of the most complex with the second highest tax rate in the world among a sample of 115 countries which have a similar indirect tax system, the World Bank said in its report on Implementation of India's Goods and Services Tax: Design and International Comparison.

The Present GST Structure and Administration

Presently, India's GST structure has five tax slabs ranging from 0 to the maximum of 28%.

Further, there are several exempted sales and exports are zero-rated, which allows exporters to claim a refund for taxes paid on inputs. While alcohol, petroleum products, stamp duties on real estate and electricity duties are excluded from the GST and continue to be taxed by the state governments at state-specific rates.

The GSTexcludes small firms with turnover below INR 2 million, and only taxpayers with a turnover of INR 15million or more charge GST on sales at the prescribed rates and can deduct GST paid on their purchases.

Taxpayers who have turnover from INR 2 million to INR 15 million have the option of participating in a 'composition scheme' whereby they pay a tax on turnover instead on value added.

The coverage of the GST is determined by two factors.

First, the number of different tax rates(including the introduction of tax exemptions) determines the extent to which different products are covered. This design parameter is typically used to protect the consumption baskets of the poor and achieve other social objectives.

However, the number of different tax rates also determines the complexity of the GST, with multiple rates imposing additional costs on compliance for businesses as well as the tax administration and encouraging evasion.

Second, the registration threshold determines which taxpayers are covered by the system. This is thus an instrument that governments can use to relieve smaller firms from the burden of complying with a GST.

As is the case in India, it is also possible to introduce a simplified system in lieu of exemptions for smaller firms which is administratively easier.

The disadvantage of introducing registration thresholds and having a simplified and presumptive tax regime is that it inevitably fragments the tax system, which may reduce the tax base and provides an incentive for larger firms to mask their size and benefit from the reduced compliance burden.

Comparing the design of India's GST system with those prevailing internationally, the report notes that the tax rates in the Indian GST system are among the highest in the world. The highest GST rate in India, while only applying to a subset of goods and services traded, is 28 percent, which is the second highest among a sample of 115 countries which have a GST (VAT) system. 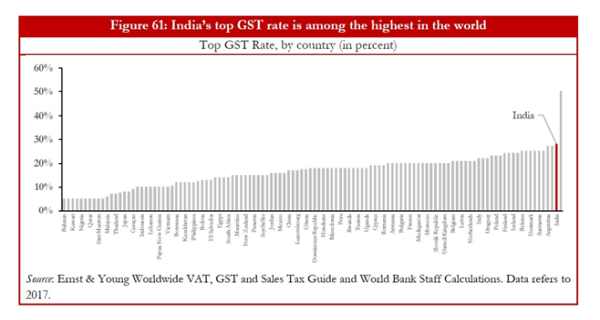 The report further states, Next, we assess how the number of different GST rates prevalent in the Indian system, and thus its complexity, compares internationally. The Indian GST system currently has 4 non-zero GST rates (5,12, 18, and 28 percent).

Most countries around the World have a single rate of GST: 49 countries use a single rate, 28 use two rates, and only 5 countries including India use four rates. The countries that use four or more rates of GST include Italy, Luxembourg, Pakistan and Ghana.

Thus, India has among the highest number of different GST rates in the world.

The threshold to register for the GST is another important policy parameter. In India, businesses having annual sales above the threshold of INR 15 million fall under the full GST, and are thus liable to remit GST and eligible to deduct input tax credit.

Those with annual sales above the lower threshold ofINR 2 million and below 15 million are required to register for the GST and pay a 'flat' 1 percent tax on sales, but are neither allowed to charge GST on sales nor deduct any taxes on inputs.

Comparing India internationally, India started with a higher threshold of $116,000 (7.5 million rupees) but in the span of a few months doubled it to $232,000 (15 million rupees) mainly to ease the cost of compliance for SMEs. 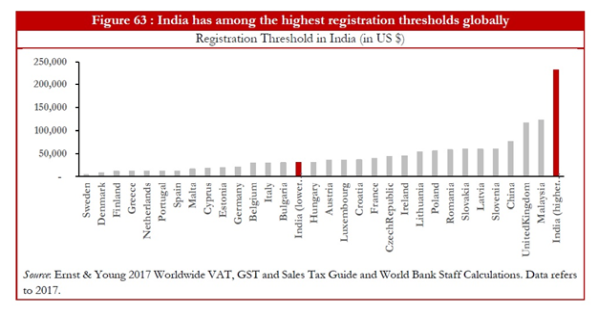 India's new threshold is the highest among all the 31 comparator countries.

Despite the initial hiccups, the introduction of the GST is having a far-reaching impact on reducing tax-related barriers to trade barriers which was one of the primary goals of the introduction.Logistics companies are also consolidating their existing fragmented set of small warehouses in each state, now that the GST has removed state-imposed barriers thereby increasing their efficiency.

However, the introduction of the “e-way bill” may result in some fresh barriers to the free movement of goods in the form of road inspections to verify the goods being transported said the world bank report.

However, while teething problems on the administrative and design side persist, the introduction of the GST should be considered as the start of a process, not the end. With the economy adapting to the new system, the GST council has been evaluating and evolving the tax structure and its implementation.

While international experience suggests that the adjustment process can affect economic activity for multiple months, the benefits of the GST are likely to outweigh its costs in the long run.

Key to success is a policy design that minimizes compliance burden, for example by minimizing the number of different rates and limiting exemptions, with simple laws and procedures, an appropriately structured and resourced administration, compliance strategies based on a balanced mix of education and assistance programs and risk-based audit programs.