Foreign Exchange reserves plays a very crucial role for any nation as we know that the global trade is dominated in foreign currencies like American Dollar, Euro, British Pound and Japanese Yen. Out of these, USD ($) is of most significance and it is considered as the reserve currency of the world which is being hold as reserves by most of the central banks around the world. Now for any nation, if it want to import anything from other country, the settlement is usually made in foreign currency reserves. So to pay the import bills timely, country’s central banks takes all necessary steps to ensure a continuous flow of forex reserves. Particularly in India, Reserve Bank of India takes all necessary steps to ensure a proper balance of forex reserves. From having a crisis of forex reserves in 1980's, India now holds a forex reserve of over 320 Billion (see the image). This reserve position made India the 10th largest holder of Forex Reserves (see the image). 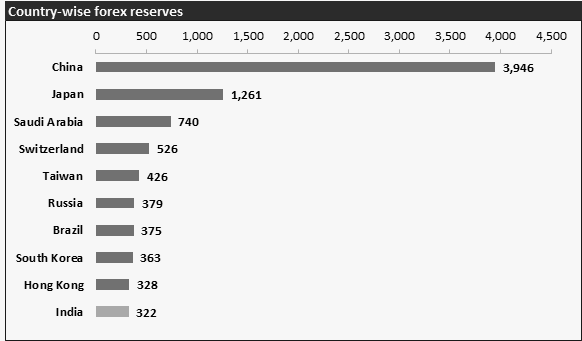 Now the question arises that is this level of forex is enough or not. A very low holding of forex reserves compared to the global trade of the country can make its currency very much volatile compared to the other major currencies. The normal rule is that more bigger the size of forex reserves, the better it is as it gives more grip to the central bank to protect its currency from the extreme volatility. One important use of the size of forex reserve is to determine the import cover of the country. Import Cover computes the number of month of imports which can be paid by using the available forex reserve.

Now, as the reserves hold by India is around $322 Billion with the average monthly import of around $40 Billion, this gives an import cover of around 8 months. This cover is considerably short compared to other BRIC nations like China, Russia and Brazil (see the image). 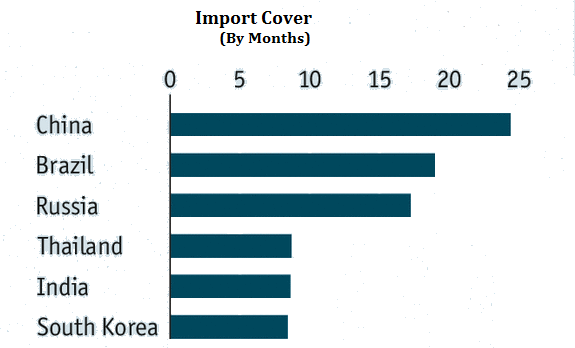 Though India is world’s 10th largest holder of forex reserves, but its reserves certainly falls short when compared to the size of its GDP. However the following factors would contribute positively in building further stock of forex:

i. Falling crude oil prices approx. 60% from its peak level.

iii. Improving overall economy thereby having more scope for increasing export of both IT as well as non-IT goods.

Conclusion: All these factors would contribute positively towards the growth of economy and building a more larger forex reserves.