WRITING ON THE WALL, NOW BEING HEARD

The writing was on the wall and now it’s being heard. The country's weakening debt profile and sluggish investment climate has blown the trumpet of Indian economic prospects. Well the downgrading of Indian economy was very much in line with the government responsibility of inactions. What S&P has marked Indian economy is based on sound fundamental factors. S&P has downgraded India's outlook to negative from stable with rating of BBB-, which is the lowest investment grade rating. It is not S&P alone Moody's has a Baa3 rating on India, while Fitch rates India BBB-. Both are also the minimum investment grade ratings. The rating is based upon low opportunities of investments in Indian economic growth. Now please don’t mix up this investment with FII investments in stock market. Well this is what the speculators try to fool the investor community. My analysis is based upon fundamental and I did not try to confuse my readers with dozens of numbers and figures.

After 2004 when the UPA government came into force the Indian economy witnessed the first journey of its growth after the prolonged slow growth of liberalisation. We economist, researcher, analyst and speculators have been trying to paint rosy colors for the Indian economic growth in 2012-13 and coming years. But the hard core fact remained at the same and no action was taken in real term to convert the portrait rosy picture into realty for the Indian economy.

THE BIRTH OF THE PAIN

High cost of interest rates has eradicated the growth and expansion plans of the Indian industry across all sectors. Moreover volatility and depreciating rupee has squeezed the margins of profitability of the Indian companies. Inflation was too high affecting the savings and consumption pattern of the consumers. This added more to the problems of downfall of Indian industrial expansion. This also resulted less profits for the companies and less government tax collection, affecting the government to meet its revenue targets. Now all of the blame cannot be slammed on RBI policies. Indian government failed to meet the FRBM targets and its fiscal deficit went up above 5% making it one of the most vulnerable economies reflecting negative growth of the Indian industry. India's fiscal deficit swelled to an expected 5.9% of GDP in the fiscal year that ended in March, far above the government's 4.6% target. We have been able to post good numbers in IIP backed my mining sector performance. If we make a quick glance at the IIP performance from December 2011 to March 2012 we will find the downfall performance of the real engines of the Indian economic growth. 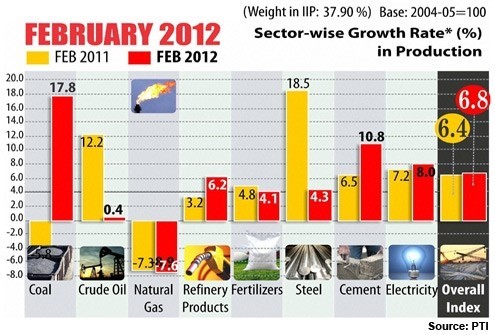 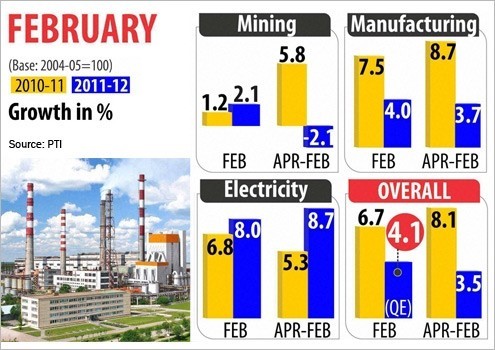 COOKED NUMBERS NOT BE TAKEN AS GROWTH

Even if RBI has lowered the interest rates it will work less to bring growth and investments for Indian economic growth. Reason is simple rates reduction will lead to restructuring of loan books resulting less amount of disbursement of Real Loans for investments. Also banks are the master of disguise when it comes to preparation of books. This is proved from the fortnight performance of loan disbursement of banks from 15th March 2012 to 31st March 2012. Credit growth had dropped to 15.4% in February 2012 from 22% at the beginning of the last fiscal. But in March this year, it picked up suddenly. Loans given by the banking system show a jump of Rs 3 lakh crore in that month. The latest numbers show that credit has grown 19.3% in the last fiscal much above the indicative projections made by the RBI even a few months ago. Now one should be very clear about the growth of investments in real terms when books are being cooked.

In my previous articles which I have written 6 months before I depicted this threat of the Indian economy and the type of policy actions needed. Find the article here http://ianalysis.blogspot.in/2012/01/today-rbi-went-for-crr-cut-which-was.htmlI repeat here again that India needs reform in the these policies which will bring back Indian economy to an hot pot of investments.

• DTC will lead to huge savings and higher consumption demand under the DTC tax slabs.

• GST will lead to higher government tax collection from sale of goods and services.

• The companies bill 2011(Now 2012) -This will change the red tape delay of company and new venture formation. One single window and easy documentation will attract more investments.

Indian needs investments in capital goods and manufacturing segment. Infrastructure bottle necks needs to be removed in order to attract flow of capital. The above issues will enable Indian government to come back on FRBM tracks. But it seems that this government will fail and will face a hard landing. Since in 2014 India government will have elections and hence the time required for turnaround is quite troublesome. It seems to be a herculean task for the Indian government to get Indian economic investments back on track.

I know many economist, speculators and research analyst will say that RBI needs to do more policy actions to spook investment opportunities. Well I keep those friends alive to portray some more rosy pictures but the writing on the wall is now being heard. Over all the government of India has also declared very soon after S&P downgrade that there is nothing to worry. The government is committed to economic reforms. Well the commitment is just going to last for another 24 months from here.