Guidelines for replacement of Rupees 500 and 1000 notes

Guidelines for replacement of existing Rs 500 and Rs 1000 notes with new notes and to understand the procedure of scheme and relevant provisions of Income Tax.

1) In terms of Gazette Notification No 2652 dated November 08, 2016 issued by Government of India, Rs. 500 and Rs. 1,000 denominations of Bank Notes of the existing series issued by Reserve Bank of India (hereinafter referred to as Specified Bank Notes) shall cease to be legal tender with effect from 9th November, 2016, to the extent specified in the Notification.

With a view to curbing financing of terrorism through the proceeds of Fake Indian Currency Notes (FICN) and use of such funds for subversive activities such as espionage, smuggling of arms, drugs and other contrabands into India, and for eliminating Black Money which casts a long shadow of parallel economy on our real economy, it has been decided to cancel the legal tender character of the High Denomination bank notes of Rs.500 and Rs.1000 denominations issued by RBI till now. This will take effect from the expiry of the 8th November, 2016

One can exchange upto Rs. 4,000 per person in cash irrespective of the size of tender and anything over and above that will be receivable by way of credit to bank account.

4) For those who are unable to exchange their Old High Denomination Bank Notes or deposit the same in their bank accounts on or before December 30, 2016, an opportunity will be given to them to do so at specified offices of the RBI on later dates along with necessary documentation as may be specified by the Reserve Bank of India.

One can go to any branch of any bank. In that case one has to furnish valid identity proof for exchange in cash. (Valid Identity proof is any of the following: Aadhaar Card, Driving License, Voter ID Card, Pass Port, NREGA Card, PAN Card, Identity Card Issued by Government Department, Public Sector Unit to its Staff). Please also carry original identity proof for verification.

6) Should one go to bank personally or can one send the notes through representative?

In case it is not possible for a person to visit the branch then the person may send representative with an express mandate i.e. a written authorization. The representative should produce authority letter and his / her valid identity proof while tendering the notes.

7) Limit on amount of cash withdrawn against cheque:

8) If any person right now not in India, what should he/she do?

If the person has Specified banknotes in India, he/she may authorize in writing enabling another person in India to deposit the notes into his/her bank account. The person so authorized has to go to the bank branch with the Specified bank notes, the authority letter given by the person and a valid identity proof (Valid Identity proof is any of the following:

9) If any person is NRI and hold NRO account, can the exchange value be deposited in my account?
NRI can deposit the Specified banknotes to his/her NRO account. 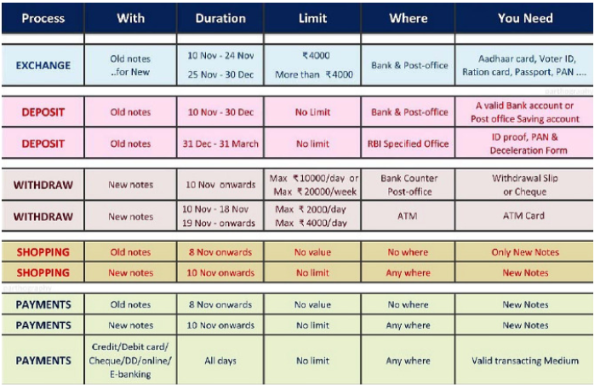 10) How much cash can be deposited

The person who maintains/is required to maintain books of accounts, the cash appearing in books of account as on 08-11-2016 can be deposited without any limit. Books should be updated upto 08-11-2016 and only cash available as per books can be deposited. Any amount deposited in bank should be corroborated with evidence through books or cash flows, where there are no books. However if the source is unexplainable then as per instructions it will be taxed @30% along with penalty @200% i.e. total tax liability could be 90% of unexplained cash. The department may raise question on amount deposited exceeding Rs. 2.5 lacs during November 10, 2016 to December 30, 2016.

12) Whether cash needs to be deposited in one account

The amount can be deposited in all bank accounts. There is no condition to deposit all cash in one bank account.

As per the provision of rule 114E:

Further as per provision of rules 114B to 114E, if cash are received from any person exceeding Rs. 2 lacs per year then the detail needs to be reported to income tax department in Form 61A.

Cash sale from 09-11-2016 onwards cannot be against notes 500/1000 as these are not legal currency except for specified seller.

The seller who is liable to tax audit will be required to maintain the person wise detail (including Name, Address and PAN/Form 60 ) of cash sales for computing the threshold limit of Rs. 2 Lakh received from such person.

As per the provisions of Section 40A(3) of the Income Tax Act, cash purchase exceeding Rs 20,000 will not be allowable as business expenses. Therefore cash purchases can be made upto Rs 20,000 per invoice in day.

Notification No 2652 dated November 08, 2016 is enclosed for ready reference. Please also find enclose herewith FAQs issued in respect of withdrawal of Legal Tender Character of the existing Bank Notes in the denominations of Rs. 500/- and Rs. 1,000/-.

Disclaimer: The entire contents of this document have been prepared on the basis of relevant provisions and as per the information existing at the time of the preparation. The observations of the author are personal view and the authors do not take responsibility of the same and this cannot be quoted before any authority without the written permission of the author.

Recommended read : Probable reason why Rs 2000 note are being issued