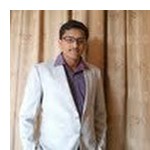 The Illustration shown below indicates how GST will work assuming IGST rate is 10%, CGST rate is 8% and SGST rate is 5%.

*It is assumed that goods have been purchased Inter-state and sold Intra-state.