Gold prices made a surprising correction but in my research I find it that billions made from the crash of gold prices and recession in the wings.

Gold prices correction and its fall were well planned in advance by the big giants of the financial market. Hedge funds made the billions by simply doing short sell and spreading research reports that they are deriving low valuation for the yellow metal. There research reports created the short positions which they finally triggered during this time. A couple of short news being spread are as follows  In February, Credit Suisse ‘predicted’ that the gold market had peaked, SocGen acclaimed  the end of the gold era was upon us, and recently Goldman Sachs told everyone to short the metal. The big father George Soros sold down his GLD position by about 55% as of the end of 2012 and had just 600,000 shares remaining. Well this "smartest guy in the room" locking in a profit after a 12 year bull market.

The big players of the world market and the bullion banks made billions by building short position on the yellow metal. But far from making billions I am more concerned about the recession fears which are looming around the corner. Crude prices are trailing at the lowest levels and Gold prices are also at the lowest. Commodity prices on the other hand are trailing at the lowest levels too. Commodity is a demand and supply driven formula. During 2008 we witnessed the same rally of Gold and crude plummeting followed with a commodity prices coming downwards.

Posted below is a chart that shows what has happened to the price of gold since the late 1960s.  As you will notice, whenever the price of gold rises dramatically and then crashes, a recession usually follows.  It happened in 1980, it happened in 2008, and it is happening again. Demand is falling and supply is abundant. 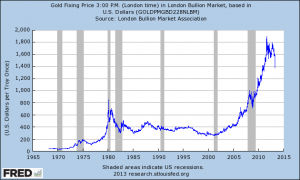 My concern of recession takes birth from the slowdown of the demand despite of the stories of growth picking up around US and other economies. Crude is the biggest indicator of the demand and inflation to pick up. But the story of oversupply has shadowed the stories of falling demand. Increase in crude price is the metric of inflation and economic growth picking up in an economy.

Moreover we are being hearing that as gold has underperformed over the last couple of years and equity market is picking up and hence it would be prudent to shift the funds or rather book profits and move to equity markets. But 14000 levels of the Dowjones are quite risky for investments and further climbing form here doubles the risk of fall. The short selling of gold made billions for the bullion banks and players and now they are creating the hype that it’s time for equity investments. I find that they are in the way of creating another billions by short selling the equity markets in the later stage so that by this time the common people will built their trust on the equity market and will built their positions.

Well the gold price fall was something beyond creativity. The following instances would make my testimony and research very productive.

1. The gold futures markets opened in New York on Friday 12th April to a monumental 3.4 million ounces (100 tonnes) of gold selling of the June futures contract (see below) in what proved to be only an opening shot.

2. Two hours later the initial selling rumoured to have been routed through Merrill Lynch's hit the market by a further 10 million ounces of selling (300 tonnes) over the following 30 minutes of trading.

The whole game is to drive the investors into equity markets since they stakes over there has reached to an optimum levels and a significant sell off might be in the wings. One of another interesting fact is that ETF redemption of gold has lead to invest into physical gold. Hence it’s clear that valuation of the gold has been kept locked in the volt only the shape or the structure of holding the same have been changed. The prime reason for such an act is the Cyprus deal where the valuation of the holding in e-paper currency format has lead to huge collapse for the economy.  Hence a huge lesson has been taken by the investors which have spooked the ETF sell off too. In simple terms it is paper-gold liquidation which has begun.

The biggest surprise among all these is that the Big money was shifting from the paper gold to physical gold and not the retail money. Since gold-ETF’s are structured to only make it possible for large unit-holders to “take delivery” in this manner. Small gold-holders are unable to access the Comex “physical” inventories hence it crystal-clear that the Big Money is on the move.

Hence those who have taken gold for an negative toss, a simple request invest and buy gold and for reasons of investing gold read the article again.