FDI Policy Circular, 2016 has been made simpler and investor friendly; and will serve as a ready reference for foreign investors on various provisions of the FDI policy.

Meaning of FDI: FDI means investment by below mentioned the capital of an Indian Company:-

Economic Growth: It is the intent and objective of the Government of India to attract and promote foreign direct investment in order to supplement domestic capital, technology and skills, for accelerated economic growth.

It is also for “Make in India”

The clauses corresponding to the following Press Notes have been incorporated in the Consolidated FDI Policy Circular of 2016.

Equity Shares: The equity shares issued in accordance with the provisions of the Companies Act, as applicable, shall include equity shares that have been partly paid

Debentures shall be required to be fully paid, and should be mandatorily and fully convertible.

Further, ‘warrant’ includes Share Warrant issued by an Indian Company in accordance to provisions of the Companies Act, as applicable

I.  Whether Company can issue Non-Convertible Preference Share or debenture to Foreign National.

No as per FDI Policy, Company can issue only Fully, compulsorily & mandatorily convertible Preference Share or Debenture. I Company issue non-convertible preference shares then it will be considered as Debt. 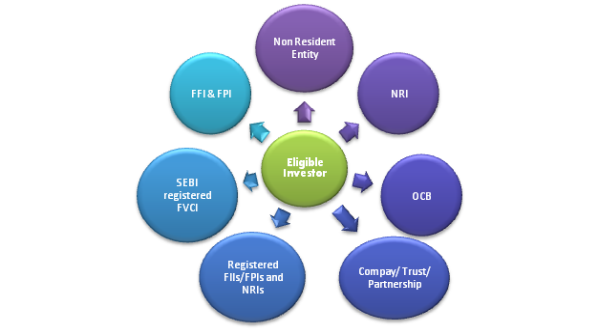 I. A  [1] non-resident entity can invest in India, subject to the FDI Policy except in those sectors/activities which are prohibited.

A citizen of Bangladesh or an entity incorporated in Bangladesh can invest only under the Government route.

· A citizen of Pakistan or an entity incorporated in Pakistan can invest, only under the Government route.

Condition: The amount of consideration for such investment shall be paid only by way of inward remittance in free foreign exchange through normal banking channels.

III.​  A Overseas Corporate Body (OCBs): [2]OCBs which are incorporated outside India and are not under the adverse notice of RBI can make fresh investments under FDI Policy as incorporated non-resident entities.

A Company, trust and partnership firm incorporated outside India and owned and controlled by NRIs can invest in India with the special dispensation as available to NRIs under the FDI Policy.

V. Only registered FIIs/FPIs and NRIs:

Only registered FIIs/FPIs and NRIs as per Schedules 2,2A and 3 respectively of Foreign Exchange Management (Transfer or Issue of Security by a Person Resident Outside India) Regulations, 2000, can invest/trade through a registered broker in the capital of Indian Companies on recognized Indian Stock Exchanges.

**SEBI registered FVCIs are also allowed to invest under the FDI Scheme, as non-resident entities, in other companies, subject to FDI Policy and FEMA regulations

Such investments shall also be subject to the extant FEMA regulations and extant FDI policy including sectoral caps, etc.

Domestic Asset Management Company: It may also set up a domestic asset management company to manage its investments.

Foreign Institutional Investor (FII) and Foreign Portfolio Investors (FPI) may in terms of Schedule 2 and 2A of FEMA (Transfer or Issue of Security by Persons Resident Outside India) Regulations, as the case may be, respectively Invest in the capital of an Indian company under the Portfolio Investment Scheme.

Which limits the individual holding of an FII/FPI below 10% of the capital of the company; and

The aggregate limit for FII/FPI investment to 24% of the capital of the Company.

Increase more than 24%: This aggregate limit of 24% can be increased to the Sectoral cap/statutory ceiling, as applicable, by the Indian company concerned through a resolution by its Board of Directors followed by a special resolution to that effect by its General Body and subject to prior intimation to RBI

The aggregate FII/FPI investment, individually or in conjunction with other kinds of foreign investment, will not exceed Sectoral/statutory cap.

An Indian company which has issued shares to FIIs/FPIs under the FDI Policy for which the payment has been received directly into company’s account should report these figures separately under item no. 5 of Form FC-GPR.

[1] ‘Non-resident entity’ means a ‘person resident outside India’ as defined under as defined at Section 2(w) of FEMA, 1999.

[2] OCBs have been derecognized as a class of investors in India with effect from September 16, 2003.