The Companies (Amendment) Ordinance, 2018 promulgated on November 02, 2018 thereby amending some of the sections of the Companies Act, 2013.

Why this amendment or re-categorisation from Fine to Penalty is a major change?

Let us first understand the basic meaning of Fine and Penalty and the difference, if any, between the two. 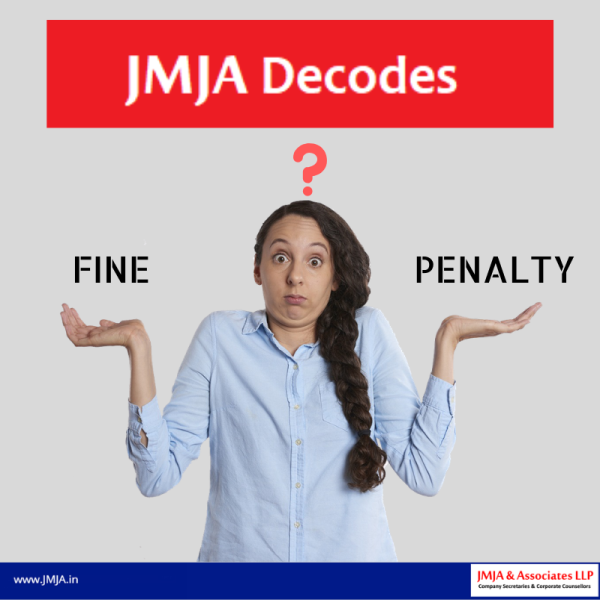 In other words, Fine is the amount of the money that a court can order to pay for an offence after a successful prosecution in a matter. Penalties do not require court proceedings and are imposed on failing to comply with a provision of an Act. In the context of Companies Act, 2013, with the re-categorisation of Fine to Penalty, ROC or MCA or any other authority as may be prescribed; may start levying penalty directly on the defaulting companies rather than filing application with NCLT and getting an order for payment of Fine by the defaulting companies.

Provision of Section 92(5) before the amendment of Companies (Amendment) Ordinance, 2018 reads as follows:

'(5) If any company fails to file its annual return under sub-section (4), before the expiry of the period specified therein, such company and its every officer who is in default shall be liable to a penalty of fifty thousand rupees and in case of continuing failure, with further penalty of one hundred rupees for each day during which such failure continues, subject to a maximum of five lakh rupees.'

Prior to this amendment, when a Company does not file its e-form MGT-7 (Annual Return) within the prescribed time limit, the Company was liable to pay a fine ranging from Rs. 50,000 to Rs. 5,00,000. This fine was levied by the NCLT after hearing all the parties. With the re-categorization of this offence to PENALTY, now ROC/MCA, can levy PENALTY upto Rs. 50,000 directly without issuing a notice or moving to NCLT for the same.

This is a welcoming step from the government as it may reduce the burden of NCLT as after this re-categorisation, 24 offenses will not be looked after by NCLT. Hence for various non compliances a Company may need not to go to NCLT with compounding applications.

Prior to this amendment non-compliance was made good by going to NCLT and paying the fine either after the defaulting companies receive notice from the ROC/MCA or .moving voluntarily to the NCLT. However, there are very rare instances where ROC/MCA had issued notices to the Companies for non-compliance and asking them to pay fine. However, with re-categorization of offence to the penalty, ROC may start levying penalty immediately at the time of filing on MCA portal, which may be in addition to the additional fees, which Companies are liable to pay at the time of late filing.

The author is the Founder and Partner at JMJA & Associates LLP. With over 10 years of work experience in various listed companies and conglomerates, he has a rich and varied experience in his portfolio.

Disclaimer: "This material and the information contained herein are prepared by JMJA & Associates LLP, Practising Company Secretaries (JMJA) is intended to provide general information on a particular subject or subjects and is not an exhaustive treatment of such subject(s). None of JMJA, its associate firms, or its members/employees is, by means of this material, rendering professional advice or services. The information is not intended to be relied upon as the sole basis for any decision which may affect you or your business. Before making any decision or taking any action that might affect your personal finances or business, you should consult a qualified professional adviser. JMJA shall not be responsible for any loss whatsoever sustained by any person who relies on this material."