When we talk about finance whether it is limited to money or something more than money, to decide we have to consider the following points.

when we consider some subject as a system it should contains various parts combined by common objective. For healthy financial system of a capitalistic economy should have the following objectives

The various parts through which financial system function are as follows

1. The central Bank, which creates reserves for banking system

2. The commercial Banks, which create working money through their loans and investments.

3. The Non-bank intermediaries, which assist in transfer of funds from savers to investors.

4. The money and capital market, which links savers and users of funds through sale and resale of securities.

5. The foreign exchange markets, which exchange and price one nation money against other s.

Even though study of finance is not solely attributable to money, it is inevitable to study the role of money in financial system to understand finance, as money act as an intermediary for all kind off transaction like blood in human body. Money issued as a factor to measure the value of various goods produces and services provided by people with various skills and specialization.

All economic activities can be represented by two matching flows.

The flow of material, machine and labor service, its final output and the final flow of goods and services from producers to customers are known as Real flow. These flows accounts for the satisfaction of wants and needs, as utilities that use the end purpose of economic effort. 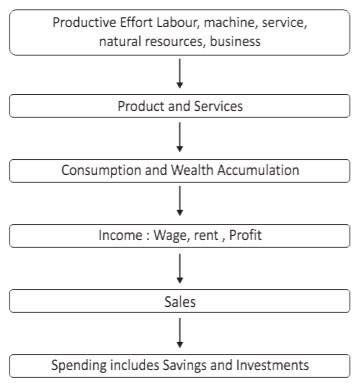 This flow involves innumerable payments and receipts of currency or financial instruments that assist the production, exchange, consumption of real wealth moving.

Almost every economic transaction involves a double movement in parallel, one part in the movement of goods from seller to buyer and other is movement of money from buyer to seller.

Most of the new money is created in the banking system and finds its way into circulation by bank loans or investments. The part of the money that the bank lends to spenders will be invested by buying bonds and securities. 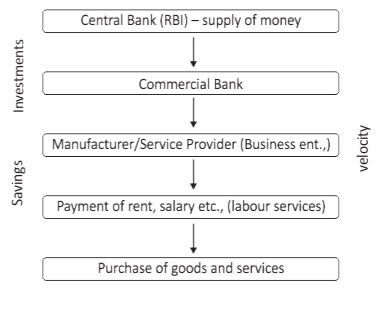 Classical interest rate theory brings as near the heart of wealth creation when people receive income, they can either spend for immediate enjoyment or differ spending by saving.

To the extent people save or differ spending, they release economic resources from having to produce for current needs. These resources then available for capital formation, investment in goods, which take time to build and which people will use up in future period. Capital goods are thus produced through saving and savings are thus identical to investments.

Money saved is money invested, while invested, user of funds (borrower) will earn profit either by way of investing in finished goods as inventory or purchase as raw material, convert into finished goods and selling the same as finished goods. The income earned on above process is the productivity of money.

The share for money lender/saver/investor is based on the productivity of the money saved/invested during a specific period is represented by interest.

Credit adds much power to the power and flexibility of economic life. It makes possible new cycle of production and consumption, distribution and exchange by doing two things

1. It activates the idle money and by doing so

2. It activates the idle resources men, machine and materials.

The extension of credit by commercial banks plays particularly important part adding to the nation’s money supply and velocity.

1. Shifting funds from suppliers to users

The first task of financial market is to gather and mobilize perhaps from large number of individuals and separate financial institution to a large part of the vast sum of money needed for each day either in short term or on long term basis for government bodies, business and consumers.

It permits the owners of the money to exchange it for securities and enabling user of money to buy money by selling securities.

They act as intermediary between less qualified capitalist (savers) and users of money (borrowers), knowing better than the ordinary public which loans are better and which loans are worse, they borrow from him, and gain a profit by charging to the public more than they pay to him.


Category Others, Other Articles by - CA.R.Jeyarajan