CA Final May 2018 exam results have just released and we are once again glad to bring to you the success stories of this year's toppers. It surely motivates everyone!

He has a very versatile persona. He is passionate about cricket and Coding, who also love to listen to Rock Music.

Let us find out what his strategy for the exam was, what suggestions he has for other students and aspirants & how he has achieved this success:

First of all, many congratulations from the whole team of CAclubindia.

So, how you are feeling right now?

When I got call from the President, I wasn' t able to believe it. I was in my office when the result was declared. As soon as I received the news, I rushed to my home and told everyone but until that time, the result was not posted on the website.

For a second, I felt as if someone would have made a prank, so I called back in that same number and later got confirmed that indeed the call came from ICAI institute itself. It was just unbelievable, unexpected and great feeling.

What was your first reaction on receiving the news?

Actually, I was very confident that I would clear with a good score. But, I never expected that I would get AIR 1st rank. I was sure that I would come around in some top 60 but securing AIR 1 was something unexpected and at that time when I got a call from the President, all my colleagues asked who called you up and I was really surprised on receiving this news.

What was the reaction of your parents when they received the news?

I called them from my office itself and shared the news of my success. They were extremely happy.

Great! So, were they expecting a rank from you?

They kept on asking me what rank you will be securing. I said, I don' t expect anything, I have given my best. They just felt that I would surely get a rank as I worked hard for the same, but none of us expected AIR 1 (smiles).

I would like to thank my entire family, my colleagues in the office and then my tuition mentor. They were all very supportive and they didn' t pressurize me much. I just believed in giving the best, express yourself in the exam and enjoy it. So, I would like to thank them all.

Can you share some insights from your study plan and share the strategy that you have followed?

From the past one and a half years, I was preparing for CA Final (Old Course) and then ICAI declared about the new course. So, for 2 to 3 days, I was wondering upon that, what should I opt for -; The Old course for which I have prepared well or take up the New course as a challenge for myself.

Then, just a simple thought came up to my mind that if somebody asks me which OS, I would like to update for -; Windows 7 or Windows 10, definitely I would upgrade with the latest one, i.e. W10; so keeping that in mind, I made the decision of taking up New Course and accepted the challenge, without thinking of the consequences. I believed myself that I can complete it in 10 months.

Would it be correct to say that you started from the scratch again?

Not from the scratch actually; the logics were same for the subjects like FM and Costing etc.; new thing what I had to do was IND AS. That was not a part of the syllabus and the elective subject -; it was entirely new.

Which elective subject did you choose?

I chose GFRS as I didn' t want to go for theoretical subjects and wanted to go for the practical approach which would be easier for me to grasp in a short-time so I preferred to go with GFRS which was comparable with the 1st paper i.e. IND AS. So, it was helpful for me.

Tell us about the last few months that you prepared for the exams?

Actually, I got leave for 6 months before exams.Actually the thing was that, MCS and Advance ITT course was to be done before exams. So, I completed it within a span of 3 months -; i.e., Oct to Dec. I was also doing my studies thoroughly with it for 2 to 3 hours per day and then from January, I started my preparations well, but, still, maximum per day, I got 7 hours -; not more than that. I didn' t leave anything actually -; there was a marathon where Modi ji came and I took this opportunity to participate in it, so I didn' t leave anything and prepared along with it and eventually, the hardwork has paid off.

So, there must be some time when you must be really stressed about your studies, so what did you do to cope up with that stress?

My best stress buster was music. I liked listening rock music -; Infact, I always used to play music while I studied.

Did you face any hurdles in this journey?

I really didn' t want to take any pressure and did everything smoothly. I believed that whatever rank I would secure, that would be enough and I was confident that I shall score well in the exams. I made a strategy of taking up one subject and trying to complete it by giving it sufficient time.

I used to wake up late in the morning, I had to go to my father' s business also, so I didn' t get the time to study in the morning and had to start my studies from 11 at night. So, I used to study till 3 am, not beyond that and then wake up at 10 in the morning. 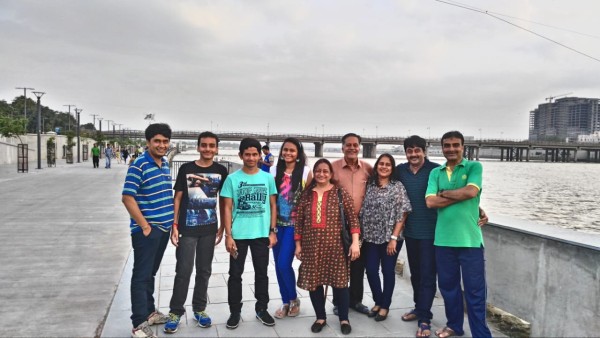 Would you like to share something related to your articleship, how important it is for the CA students and how it helped you?

I did my articleship from SNK & Company from Surat. It' s a reputed firm. I got good amount of exposure in almost every field. I did Audit, Consolidations, Income tax, Indirect tax, TDS -; so, overall, I got a little bit of exposure for everything. More importantly, I also got the exposure for IND AS and IFRS. So, it helped me a lot.

Even if you study everything from the books, it would be very tough to apply in practical scenario, so you need to have focus on articleship. So, do not take it for granted. If you are clear from practical point of view, then you can easily grasp the theoretical things. But, it' s not the other way round.

So, did you prepare your own hand-written notes?

Yes, I prepared for every subject like -; Law, IND AS, GFRS etc. So, basically, I used to prefer to go through my own handwritten notes while exams. I used to prepare the hand-notes in a detailed way so that I may not have to open the modules before the exams. So, it proved to be very helpful.

What are your other interests apart from your studies and the music that you listen?

There are many things - I like watching cricket and coding a bit. Actually, my father is a computer dealer, so from childhood I was interested in computers and IT.

A client once wanted a type of software so I coded the same in MS Access in visual basic (VBA), so I coded it and provided in the kit. So, I am interested in IT and you can say that it is hereditary to me as my father is also an (MCA) software engineer.

what would you like to share about the electives that have been Introduced in the new syllabus?

I would like to say that first of all, the students should look for their stronger part -; theory or practical. If you think that your theory is stronger then you should go for Risk Management, Capital Markets and Economic Laws. Other subjects like GFRS, International Taxation and Case Studies are more of practical based subjects. So, they should decide themselves which subjects they should go with.

Also, are you a member of CAclubindia?

When I used to search for study-related stuffs, I used to check CAclubindia.

Any last message that you would like to convey to the CA community?

After 10th, I decided to pursue CA. When I was in my 11th /12th standard, Accounts was my favourite subject and I thought what further higher degree can be achieved, for Accounts it was -; “Chartered Accountant”. So, it was then when I decided to become a CA -; Chartered Accountancy was my goal after 12th and I wanted to clear this.

And, I would like to say that anyone who is interested in calculative subjects should pursue CA. CA is not only about Audit and Tax -; it is much more that. Finance, IND AS, IFRS is also of great scope now.

One myth that you would like to clear about the CA course?

You might have heard that many of the CA students deactivate their Whatsapp, Facebook for some 6 to 7 months, keep their mobile beside. I did nothing like that.

I would say that, If I can reach AIR 1 mark, then anybody can achieve the same -; like, while I am studying, I listen to music and nothing else. I have seen many of my friends doing this, they didn' t even use their mobiles during exams and if you wanted to contact them, their parents would be taking up the calls.

So, I don' t recommend curbing out of your social life and keeping yourself isolated. It' s not required at all.

Also, what are your plans for the future?

I will think upon that -; I have some 3-4 options in my mind, but I haven' t yet decided on any of those.

But, I have to decide among these, I haven' t yet being able to decide on the same.

Great!! Once again, I would like to congratulate you on behalf of CAclubindia and share my best wishes for your future.

Stay tuned with CAclubindia for more such Interviews.