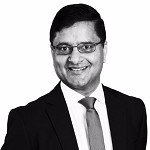 Gold has traditionally been used as a monetary exchange mechanism in most countries, however, by the 1930s, most countries left gold standard. The USA was the last country to issue gold coins in 1932. Recently, Switzerland which had tied its currency to gold reserve finally gave up when it joined IMF (International Monetary Fund) in 1999.

The current global consumption of new gold production is 50% in jewellery (including art work and other consumer products), 40% in investments and 10% in industries. India ranks Number One consumer of gold - a massive 25% of the world’s gold production (approx. 800 tonnes a year). India’s consumption is expected to increase to 965 tonnes this year. Approximately, 50% of India’s gold consumption is imported every year (approx. 400-450 tonnes a year).  Indian consumers hold approx. 18,000 tonnes of gold.

The primary reason that the consumer demand for gold in India constantly increasing can be partly attributed to our culture – we use gold as a reward for everything right from birth, first birthday, success in school performance to wedding etc. It is a status symbol to display the amount of gold one has to command respect in the society in direct contrast to the western society.

Some of the economic impact of our excessive attraction to gold:

1. One of the reasons for Indian Rupee depreciation in the recent periods (Rupee is at all-time low against USD, GBP and most other major currencies - above Rs 61/USD, above RS 93/GBP).

2. In March 2013, the Current Account Deficit hit a record high of 4.8% due primarily to substantial increase in the import of oil and gold.

3. Growth rate is falling faster than ever.  In the last 5 out of 8 years, India's growth rate (GDP) was at around 8.5% which has now fallen to mere 5% and there is no sign of improvement growth in the near future. Partly because the increased import of gold is not being used for increasing India’s growth instead stored away idle in consumer’s domestic locker. Consumer holding such large quantities of gold does not create growth in the economy.

4. Corruption.  Yes gold plays a significant role in corruption. If you look at history and analyse why most western countries exited gold in the 1930s, it is partly because of corruption. Controlling corruption in gold is difficult to manage (and it is a completely different topic to discuss).  Most corrupt establishments in India like Gandhi empire, Karunanidhi empire (Tamil Nadu) etc. hold substantial amount of their corrupt wealth in gold.

5. Lack of willingness to effectively implement a number of existing anti-corruption measures, tax laws and other legislative measures provide opportunities for the corrupt to hide their undeclared wealth in gold.

6. Gold is also one of the root causes for some of the social problems like dowry in rural India.

As India is the largest consumer of gold, the global gold producers and traders even artificially increase the gold price during Indian festive seasons like Diwali, wedding seasons etc – as the demand exceeds the supply. I trade gold in London. When I speak to my fellow traders why gold price has gone up this week, their prompt response will be there must be some festival in India!!!!

What can we do?

Even though, people think that gold is the safest asset, it is not. Gold is like any other material asset that can be stolen or lost. The value can go down as well as up. Whereas, education (knowledge or vidya) is a permanent asset that cannot be stolen from you or you cannot lose it (even if you want to). If you share your gold with another person (mother, sister, daughter etc), you become poorer and they gain some value in terms of gold. Whereas, if you share vidya (knowledge), you lose nothing but they gain something. If you become a Doctor, Accountant, Engineer, Advocate etc. that knowledge/qualification remains with you forever. If only we (Accountants) can promote this awareness to our clients and consumers in general in India, we can (over time) contribute to addressing this issue of excessive consumer attraction to gold.