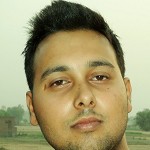 Economic Survey is an annual document prepared by The Department of Economic Affairs, Ministry of Finance, and tabled in a parliament day before Union Budget. It is the first document that is tabled in parliament after the beginning of the Budget session. It reviews development in the Indian Economy over the previous 12 months. This encapsulates a summary of the performance of major development programs and also highlights the policy initiatives of the government and the prospects of the economy in the short to medium term. 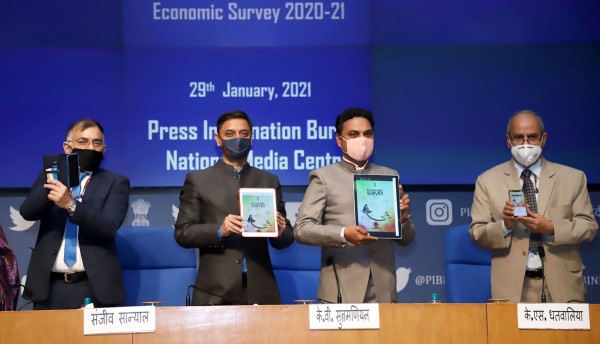 It is presented in 2 parts. Volume 1 and volume 2.

It reviews recent developments in major sectors of the economy. It is supported by relevant statistical tables and data. 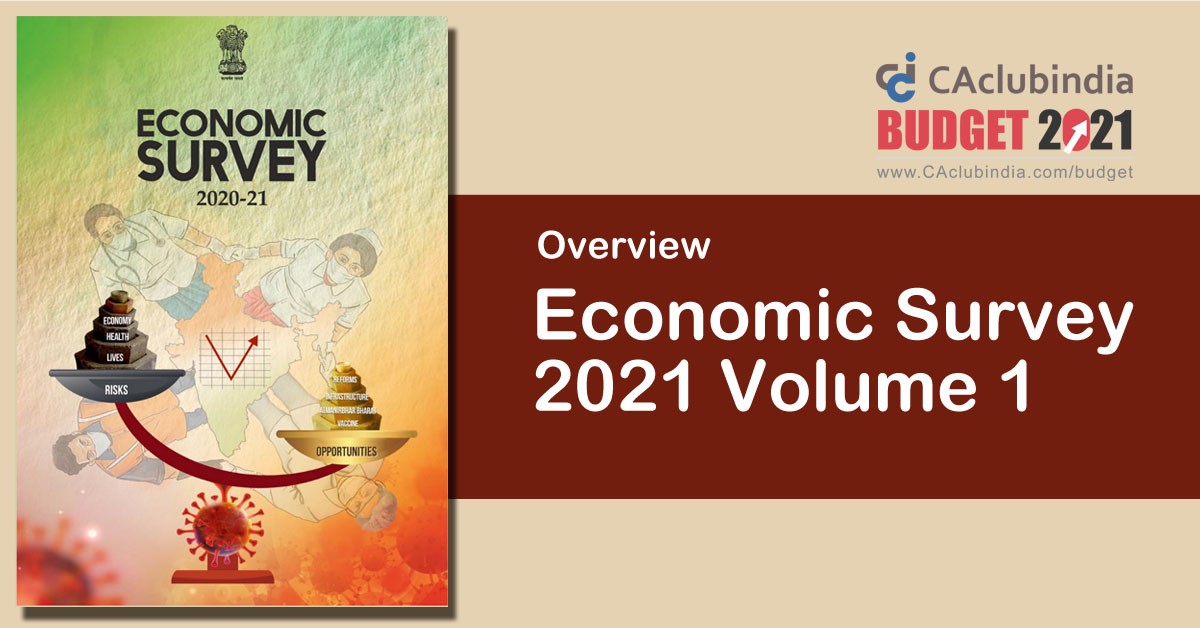 This year's theme of Economic Survey revolves around the Corona Warriors who have really helped in upholding India. The foundational theme is 'Saving Lives and Livelihoods'. On the cover page, you will see this in the following image. 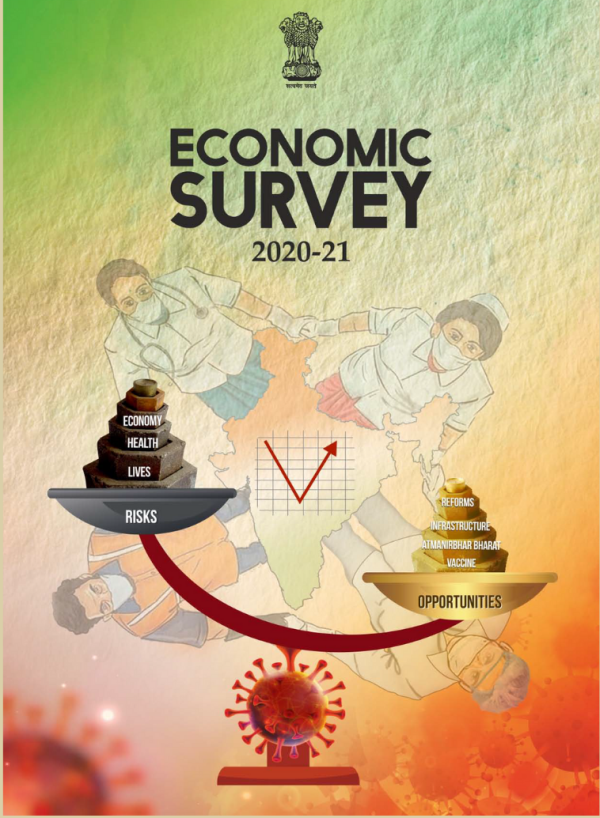 This volume is divided into 10 chapters. Here is an overview of each chapter.

1. Saving Lives and livelihoods amidst a once in a century crisis

The economic survey 2021 emphasizes how India recognized the importance of early lockdown that not only saved more lives but also ensured a quicker economic recovery. India's policy response towards the Covid 19 was derived from the extensive research on Epidemiology, especially that looked at the Spanish Flu epidemic of 1918.

Governments also emphasized flattening the curve because it provided time for scaling up preparations of health and testing preparations.

One of the key points of research was that pandemic spreads faster in dense populations. To prevent it stringent lockdown was necessary.

The strategy was also motivated by the Nobel-Prize winning research in Hansen & Sargent(2001) that recommends a policy focused on minimizing losses in a worst-case scenario when uncertainty is very high. Faced with an unprecedented pandemic and the resultant uncertainty, loss of scores of human lives captured thus the worst-case scenario.

Intense lockdown provided a win-win strategy to save lives, and preserve livelihoods via economic recovery in the medium to long-term. This strategy revolves around short term pain for long term gain.

While the lockdown resulted in a 23.9 percent contraction in GDP in Q1, the recovery has been a V-shaped one as seen in the 7.5 percent decline in Q2 and the recovery across all key economic indicators.

Chapter 2: Does Growth lead to debt sustainability? Yes, But not vice versa!

During the presentation, Chief Economic Adviser gave an example to give insight on chapter 2 which is as such. For example, If the government borrows rs.100 at an 8% interest rate and earns 12% as the return, the government will earn net rs.4 after settling principal and interest amount. This can be repeated again and again if the GDP growth rate is higher than the borrowing cost on loans borrowed by the government. So in bad times the government should increase spending by borrowing and reduce taxes. 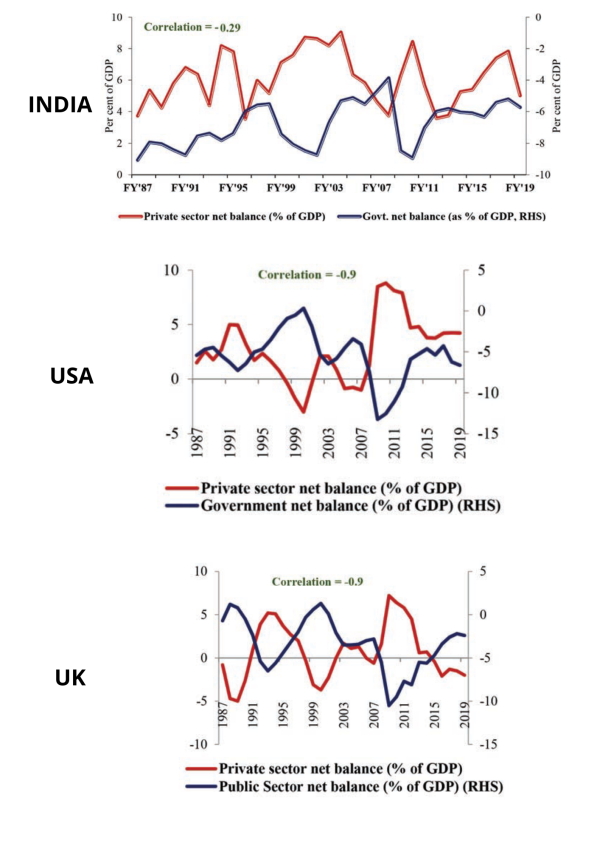 In old times Nawabs and Kings used to follow this policy. The famous imambara in Lucknow was built in 1784 under a famine (widespread scarcity of food) relief program.

Chapter 3: India's Sovereign Credit Rating Does Not Reflect its Fundamentals

This chapter questions reliability of Sovereign Credit Rating provided by International Agencies like Finch, Moody, etc. Credit ratings map the probability of default and therefore reflect the willingness and ability of a country to meet its obligations of the public sector and private sector.

Never in the history of sovereign credit ratings has the fifth largest economy in the world been rated as the lowest rung of the investment-grade (BBB-/Baa3). Reflecting the economic size and thereby the ability to repay debt, the fifth-largest economy has been predominantly rated AAA. China and India are the only exceptions to this rule – China was rated A-/A2 in 2005 and now India is rated BBB-/Baa3.

This chapter raise question on rating BBB-/Baa3 given by International Agencies which represents the lowest possible ratings for a security to be considered investment grade.

India's willingness to pay is unquestionably demonstrated through its zero sovereign default history. India's ability to pay can be gauged not only by the extremely low foreign currency-denominated debt of the sovereign but also by the comfortable size of its foreign exchange restock of India's external debt including that of the private sector.

India's non-government short term-debt as a percent of forex reserves stood at 19 percent as of September 2020. India's forex reserves can cover an additional 2.8 standard deviation negative event, i.e. an event that can be expected to manifest with a probability of less than 0.1 percent after meeting all short-term debt.

India has shown good performance on several parameters like

But the positive impact of these factors did not emerge in credit rating.

This chapter suggests India's fiscal policy must not remain beholden to a noisy/biased measure of India's fundamentals and should instead reflect Gurudev Rabindranath Thakur's sentiment of a mind without fear.

In this chapter, the Survey examines if inequality and growth conflict or converge in the Indian context. By examining the correlation of inequality and per-capita income with a range of socioeconomic indicators, including health, education, life expectancy, infant mortality, birth and death rates, fertility rates, crime, drug usage, and mental health, the Survey highlights that both economic growth – as reflected in the income per capita at the state level –and inequality have similar relationships with socio-economic indicators.

Economic growth has a far greater impact on poverty alleviation than inequality. Given India's stage of development, India must continue to focus on economic growth to lift the poor out of poverty by expanding the overall pie.

This chapter suggests if public health spending is increased from 1 percent to 2.5-3 percent of GDP by the government it may decrease the expenses made by the public on health from 65% to less than 30% of overall healthcare spending. 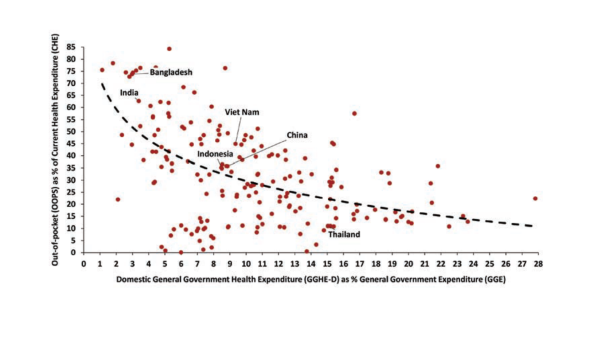 The recent COVID-19 pandemic has emphasized the importance of the healthcare sector and its inter-linkages with other key sectors of the economy. The ongoing pandemic has showcased how a healthcare crisis can get transformed into an economic and social crisis.

The National Health Mission (NHM) has played a critical role in mitigating inequity as the access of the poorest to pre-natal and post-natal care as well as institutional deliveries has increased significantly. Therefore, in conjunction with Ayushman Bharat, the emphasis on NHM should continue.

It further recommends establishing a sectoral regulator to undertake regulation and supervision of the healthcare sector to ensure the delivery of quality health care at a reasonable price. Telemedicine needs to be harnessed to the fullest by investing in internet connectivity and health infrastructure.

The Economic Survey 2021 shows that PM-JAY continued to be used significantly for high frequency, life-saving procedures like dialysis, without disruption even during the COVID pandemic and the lockdown.

Our bureaucracy is phenomenally good in mission-critical activities like arranging the world's longest election, mass corona vaccination program but when it comes to day-to-day activities an improvement is needed.

The International comparisons show that the problems of India's administrative processes derive less from lack of compliance to processes or regulatory standards, but overregulation.

In this chapter, the issue of over-regulation is illustrated through a study of time and procedures taken for a company to undergo voluntary liquidation in India. Even when there is no dispute/ litigation and all paperwork is complete, it takes 1570 days to be struck off from the records in comparison to 600 days in OECD countries and 120 days in Singapore.

This chapter argues that both economic theory and evidence shows that in an uncertain and complex world, it is not possible to write regulations that account for all possible outcomes.

This makes discretion unavoidable in decision-making. The attempt to reduce discretion by having ever more complex regulations, however, results in even more non-transparent discretion.

The solution is to simplify regulations and invest in greater supervision which, by definition, implies a willingness to allow some discretion. This chapter suggests a balance between compliance and discretion.

This chapter suggests measures adopted by policymakers during the crisis period should not continue beyond the period of crisis. For example, when emergency medicine becomes a staple diet, it can be counterproductive.

This chapter studies the policy of regulatory forbearance adopted following the 2008 Global Financial Crisis (GFC) to extract important lessons for the current times.

Regulatory forbearance for banks involved relaxing the norms for restructuring assets, where restructured assets were no longer required to be classified as Non-Performing Assets (NPAs henceforth) and therefore did not require the levels of provisioning that NPAs attract. During the GFC, forbearance helped borrowers tide over temporary hardship caused due to the crisis and helped prevent a large contagion.

However, the forbearance continued for seven years though it should have been discontinued in 2011, when GDP, exports, IIP, and credit growth had all recovered significantly. Given relaxed provisioning requirements, banks exploited the forbearance window to restructure loans even for unviable entities, thereby window dressing their books. 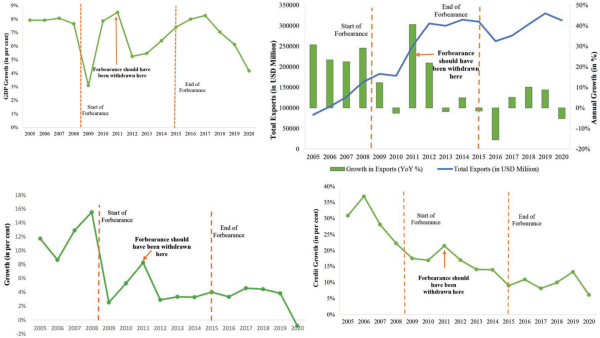 The inflated profits were then used by banks to pay increased dividends to shareholders, including the government in the case of public sector banks. As a result, banks became severely undercapitalized.

This led to the second round of lending distortions, thereby increasing an already grave situation. The prolonged forbearance policies following the GFC thus engendered the recent banking crisis that brought down investment rates and thereby economic growth in the country.

Chapter 8: Innovation: Trending Up but needs thrust, especially from the Private Sector

India entered the top 50 innovating countries for the first time in 2020 since the inception of the Global Innovation Index in 2007, by improving its rank from 81 in 2015 to 48 in 2020. India ranks first in Central and South Asia, and third amongst lower-middle-income group economies.

The business sector in India contributes much less to gross expenditure on R&D (about 37 percent) when compared to businesses in each of the top 10 economies (68 percent on average).

This chapter suggests that increasing a private partnership in Research & Development. In January 2006, China initiated a 15-year 'Medium to Long Term Plan (MLP) for the Development of Science and Technology'.

MLP called for China to become an 'innovation-oriented society' by the year 2020, and a world leader in science and technology (S&T) by 2050. It committed China to develop capabilities for 'indigenous innovation' and to leapfrog into leading positions in new science-based industries by the end of the plan period.

The MLP of China used R&D as an important instrument for the development of the S&T ecosystem.

This chapter examines the progress made in providing access to 'the bare necessities' by constructing a Bare Necessities Index (BNI) at the rural, urban, and all India level.

The BNI summarises 26 indicators on five dimensions viz., water, sanitation, housing, micro-environment, and other facilities. The BNI has been created for all states for 2012 and 2018 using data from two NSO rounds viz., 69th and 76th on Drinking Water, Sanitation, Hygiene, and Housing Condition. Access to 'the bare necessities' such as housing, water, sanitation, electricity, and the clean cooking fuel is necessary to live a decent life.

Compared to 2012, access to 'the bare necessities' has improved across all States in the country in 2018. Access to bare necessities is the highest in the States such as Kerala, Punjab, Haryana, and Gujarat while it is the lowest in Odisha, Jharkhand, West Bengal, and Tripura. 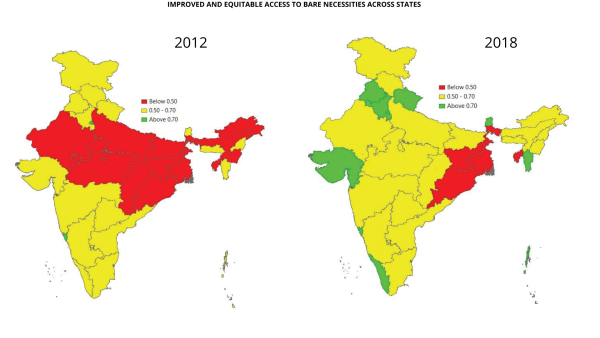