Doctors and Auditors as Professionals


Professionalism includes a variety of personal qualities, abilities, talents, potential and behaviours that are essential to prove ones commitment to effective performance in a given occupation. In other words, Commitment and confidence, responsibility and dependability, honesty and ethics, and appearance and professional presence are pivotal professional characteristics

Professionalism is a skill and proficiency that drives beyond what a normal person would have or behave in a more formal or business-like manner. The status, methods, character or standards expected of a professional or of a professional organization, such as reliability, discretion, even handedness, and fair play.

The NBAA Safety Committee has identified six traits of personal professionalism as a starting point for those who want to improve their own performance: character, attitude, engagement, competency in a vocational skill, image and continuous improvement.

Now, let us discuss which profession among Chartered Accountant and Doctor is more ambitious because both of them are the same level of profession and rendering similar task, both engaged in treatment and making a person healthy.

For CAs, they deal/interact with book figures/artificial persons. As against, doctors deal with natural/living persons. That is the main diffidence.:

Doctor's Tool is a telescope and knife especially in operations however CA use a pen as tool.

Doctors make a person healthy, whereas CAs consider issues on 'true and fair view' on giving an opinion on the result of the clients' accounts that have a big say on the affairs of the company.

Very often, patients have to more often than not consult family doctors.

There is a possibility a person may diewhile on treatment by a doctor if it is beyond control.Similarly, a CA may be involved in winding up of company where warranted.

Doctors usually give prescriptions for patients whereas CAs usually express their opinion on an issue/audit in terms of applicable law/act as well as per applicable Accounting Standards/ Audit Standards.

Doctors will write down phases of a person's treatment whereas CA may write audit documentation at different levels. It is understandable that auditors make a judgement call in taking/crystalizing his opinion as to true and fair view as against judgement given by judges are binding in law unless agitated in higher courts until its finally decided in SupremeCourt.

Further, reverting back to Living figures vs. Book figures, the former are handled by the doctors and the latter by CAs. 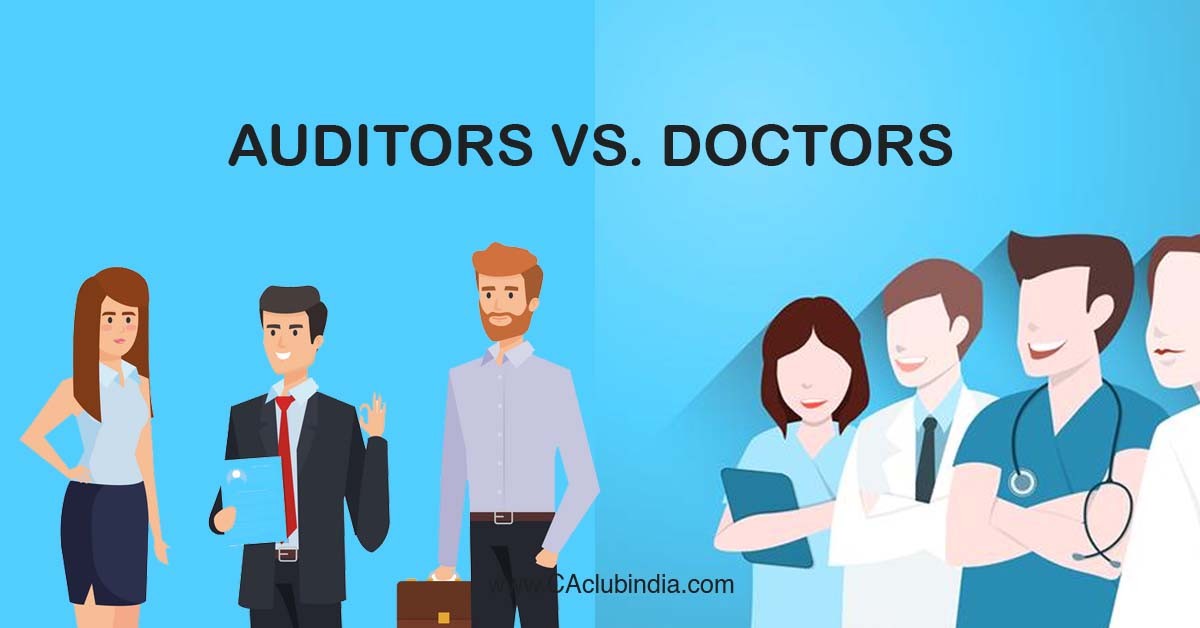 But, what one should know is both CAs and doctors confront 'risk' in their professions.

'To know that, we should understand what is risk first?

'We need not worry very much on risk since we face risk in every of our activity. In every birth, there is a risk of death. Because of that, should we stop births finishing the future generation? If we walk on the roads, there is a possibility of knocking down. Does it mean that we should not step out? If a doctor operates, there is a chance of patient collapsing. Does it mean operationsare to be barred/ dispensed with for ever in spite its absolute necessity?

Then, how to approach could be the immediate reaction? 'The correct reaction is right attitude- a positive one. Now, what one should do is to get to know the weaknesses and vulnerabilities to exit risks so as to put in place a control mechanism to ward off the risks or at least mitigate the risks besides putting into practice a sustainable improvement in the system to guard against recurrence'.

Risks are caused either by errors or frauds

In the books of accounts, risks are caused either by errors or frauds. There are basic differences between the two. 'Errors' normally happen in books. Errors happen by slip but not on the lip!' In the same vein, 'It must be understood that it is not the figures in the books that cause errors but by the human elements involved since error is human. One does not know how far is it correct to call errors as human since even animal kingdom commits errors! At the most, we can say errors are accidental, inadvertent unintentional and not deliberate. Errors may happen by slip, that is 'omission'; it mayalso happen by flip, that is, commission. Therefore, by omission or commission errors creep in the books of accounts by default'

The next question that crops upis about “What is fraud.'It is deliberate, intentional and deceptive. Fraud is committed and enacted deceptively by the human kingdom only. Isn't it? It is understandable animals can not commit fraud since they cannot think; hence, the sixth sense is the major culprit. Fraud, therefore, is a major risk that should be nipped in the bud before it assumes cancerous proportion. In fact, there should be zero tolerance for corruption'.

'By placing proper internal control system, both could be mitigated, if not fully warded off'.

Doctors treat their patients. CAs deal with their clients.

'With business enlarging owing to global demand, it would be difficult for an auditor to see all the documents concerning transactions to give a 'true and fair view' Therefore, sampling technique is increasingly adopted so that more time allotted for high end audit to opine effectively on true and fair view'.

'Is audit by sample not a risk?

"It is an interesting question. You go to a doctor. He takes blood by sample. He is able to detect your blood group, blood sugar, cholesterol and what not by that sample? Supposing, he has to take the entire blood for testing, do you think anybody can survive? Therefore, what should be taken care of is 'sample is from a homogeneous population' whence sample represents in ample the population.' So, in crisp, the utility of sample in the context of audit.

As doctor verifies genetic disorders and the control put in place by the patient to tackle the issue along with the findings of the sample to diagnose the disease, the auditor has to understand the inherent risks of the business and the control in place before he devises his plan of audit- approach to reduce his deduction risks'

Then, when one goes to a doctor, he first asks his family history to know his genetic problem, if any. Then, he finds from him what kind of control he has put in place to regulate. Based on that, he takes the steps to detect, that is, to diagnose the disease to ease. For example, if the patient's family has acute diabetic history, this is genetic risk. Daily morning walks and his food regulation on intake are control in place. Then, the doctor devises his detection/diagnoses process. What isgenetic risk for living ones is inherent risk for book figures.

Doctors havepatients that they charge fees based on the texture of the diseases and treatment involved without much considering patient's ability to pay. It is why they are rightly called patients? Hence, Patients are in anger with fleecing doctors. CAs charge based on the size of the company and work involved. Doctors are specialists and practice based on their experience, as teeth specialists, skin specialists, eye specialists, etc. CAs also no different as Income Tax Specialists, GST specialists, Bank audit/ Insurance audit etc.

One might be surprised as to whyanyone compare doctors and CAs vis-a-vis- their professional practice. It is a statement of fact only a few students become CAs each year as against more doctors are added to the listof doctors becoming eligible to treat the patientsin endlessly raising population.? The opposite is the situation for CAs.

Patients may crop up any time exposed to multi pus diseases of different dimensions including COVID 19. But, auditors' duties and responsibilities are well defined –period wise. depending on innumerable Acts prevailing in various countries, Rules and Regulation thereunder and what not.

Doctors have their patients to ensure their health of multifarious diseases inflicted as against clients for CAs with different types and lines of business
to assure true and fair value on the wealth.