In the past few weeks, you must have read the news of various auditors resigning from their assignments, that too near the end of finalization of the audit. 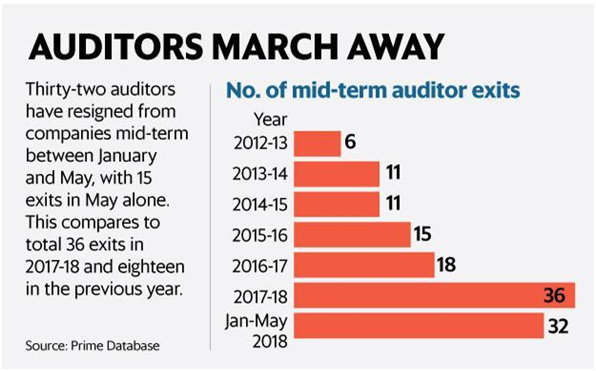 It is a quite peculiar situation where two big audit giants Price Waterhouse Cooper and Deloitte has resigned from Vakrangee Ltd., Atlanta Ltd., and Manpasand Beverages Ltd. respectively, halfway through an audit.

What is more unusual is,

In all the cases, the auditors resigned just a few days before finalizing their annual accounts;

In all the cases, the reasons for resignation (as mentioned by auditors in their representation to authorities) was 'Inadequate Information'.

Interestingly, the companies in their public statements seem adamant to ignore the auditor's remarks and call it a 'small hiccup'.

However, their share prices tell a different story. Here's is a quick view of the fall in the share prices of all the three companies: 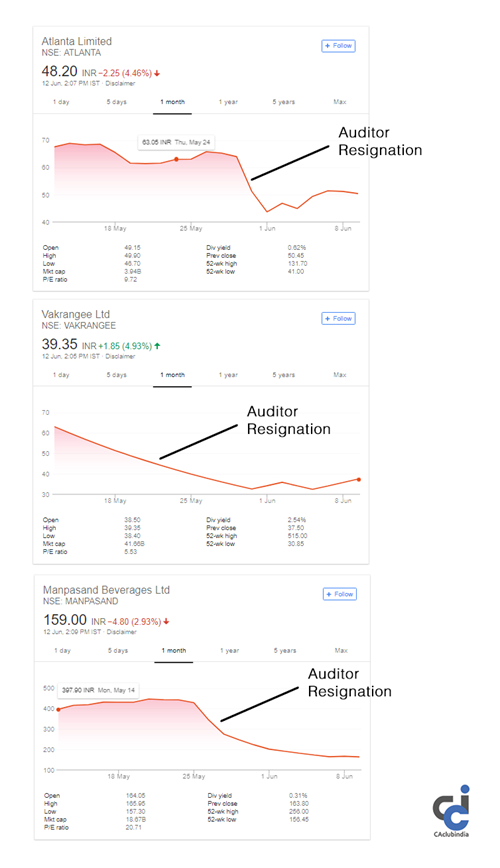 From the above, analysis it can be clearly seen that companies have faced a huge fall in their share prices.

Even more interesting is the fact that, there have been more than 32 cases of such resignation in last 6 months, as per data collated by Prime Database.

The reason for all such resignation has ranged from lack of adequate information on the company's business, revenues to tax observations.

One common reason of such resignations by Auditors seems to be the fear of being pulled off by the regulators or being caught involved in the crosshairs of any corporate scams.

Data also shows that in many of the cases of auditor resignation, Independent directors and Company Secretaries of the companies too have resigned following the footsteps of the Auditors.

It seems like the new companies' act, a stricter ICAI and increased regulatory institutional oversight (NFRA, SEBI etc.) no auditor will take the risk to be involved in any such matter.

In the long term, this can be a good sign of health and well-being of the corporate governance standards in companies.

What are the possible reasons?

According to various experts on the topic, there can be four such reasons for auditors to resign in midway through the audit:

Why it matters for all the other stakeholders?

Regulators and Shareholders rely on the audited financial statements which are attested by the Auditors of the company.

Therefore, where Auditor himself is not able to perform his duties properly and resigns midway through the audit. This directly or indirectly indicates signs of mismanagement in the company, leaving shareholders and investors in the guess work.

Which stand to believe upon?

During a public dialogue, Management of the Manpasand beverages claimed that the decision to part ways with the auditor was taken by its management.

However, the auditors said they have resigned from the position due to non-availability of significant data and information to form an opinion.

If the claim of the management is relied upon, in such case - this amounts to the removal of the auditors - which requires special approval first from the government and then from the shareholders as per the Companies Act, 2013.

As per the Companies Act, 2013: The auditor appointed under Section 139 may be removed from his office before the expiry of his term only by a special resolution of the company, after obtaining the previous approval of the central government in that behalf in the prescribed manner.

Now, the question arises whether this spree of resignations based on their sudden awakening of conscience and ethics goes like this or it stops and follows the same path of comfort.

Share your opinions on the same in the comments below.