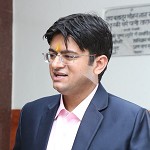 
Central Banks from US to Japan to Europe are stuck with their dead weapons of monetary policy and pleading with their masters (the government) to up their game. The Central Banks tools to bolster the economy is near its saturation as the efforts were not complemented with structural reform by the political governments. Without structural changes, cheap and easy available credit is not only enough to boost the business man confidence. There has been rise in the scepticism amongst the entrepreneurs and monetary policy weapons has not been very effective to change their mood. On the other hand rising economic uncertainty and already super inflated asset valuations discouraged investors to invest and take further risk.

As a result of distributing cheap credit and quantitative easing by printing more & more money, the size of central banks balance sheet has grown to a level where the reverse gear seems a rare possibility. The excess money has been flowing into the financial markets, real estate and other assets which keep it heated up all the time and make it difficult to correct. This by many economist is termed as "False economy" where the assets are falsely overvalued as compared to the intrinsic value. High liquidity and high debt levels has provided the excess liquidity and kept the market going. Everyone has its fingers crossed and is unlikely to take a long term positions.

For Japan, the so called Abenomics has been proved ineffective to boost the market & individual sentiment in Japan and there is a need for structural shift in areas like immigration. The ageing population has been ineffective to boost the economic activity and similar is the case with South Korea. The economy has been stuck with dead investment and even negative yield on these dead investments are not able to push money in to any productive activity.

Chart 1 shows that in the beginning of 2016 the 10y govt bond yield broke the zero level and moved to negative zone and since then it seems to be comfortable there. The reason is not difficult to understand, It’s because the central bank wanted it to happen and made it happen by slashing interest rates below zero. It seems like central banking is taking lot of pressure alone or their master are putting pressure on them to run the economic wheel faster. The same trap can be seen in Germany. In the month of may, 3 months inter bank rate(FIBOR) broke the zero level and went into the negative zone. The 10Y bond yield has been fallen more than -0.10%. The famous economist George Soros has explained this as theory of fallibility and reflexivity. As per this theory equilibrium is not the automatic situation to happen and it is the movement of market participants in large which have the force to change the fundamentals and the action of market participants reinforce itself in either direction till the time there are new major change in behaviour of most of the market participants. So low interest rate for so long has made a new normal and changing this normal to the pre-crisis time of 2008 seems to be the unlikely.

You can see a very divergent economic scenarios around the globe where the developed economies, developing economies and the undeveloped economics are working in different directions with different sets of problems. The imagination of correction is scary because the solutions are no longer the same and globe is so much interlinked that solution of one will impact other in the reverse manner. Though here my intention is not to discuss this dis alignment but to make you feel that it's very much pervasive and irreversible without substantial damage. I will surely take this in another article in detail.

With this article I did my attempt to make visible the hidden distortion into the economy. I would be sharing further post on this topic. Stay tuned.