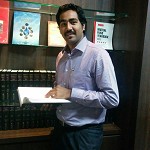 Management model is a mode of communication used heavily by professionals and managers by bridging differences in abstraction and providing comprehensiveness. One such strategy is the Blue ocean strategy.

Most strategic models focus on achieving competitive advantages: the central question being how to be better than the competition. The Blue ocean strategy model does not focus on winning against competitors, but on making the ‘competition irrelevant’ by creating blue ocean opportunities. Blue oceans are “uncontested” opportunities in which new demands of customers are satisfied. On the contrary ‘Red oceans’ are competitive arenas in which competitors fight and consequently weaken each other.

When to use it?

Blue Ocean strategy dictates direction to the strategic management process. The development strategy often focuses solely on how to beat the competition. This will lead inevitably to a red ocean strategy in which competitors fight and consequently weaken each other. In order to direct the focus of strategy development towards the creation of blue oceans, the management team needs to answer four questions:

i. What type of industry factor taken on assumption, should be eliminated?

ii. What type of factors should be reduced well below the industry’s standards?

iii. What type of factors should be raised well above the industry’s standards?

iv. What type of factors should be created that the industry had never offered?

How to use it?

Blue Ocean strategy not being a well-structured plan is at times apprehensive to implement. On the contrary, it is a concept that can be used to focus on strategic development (by answering the above questions). There are 6 core principles at the heart of Blue Ocean strategy that can be used as a guideline to tackle six key common to new product development strategy, namely: search risk, planning risk, scope risk, business model risks, organisational risk and management risk. The 6 blue ocean principles can be interpreted as an ‘implementation’ guide for creating uncontested markets.

2. The second principle – focus on the big picture, not the numbers; tackle the planning risk by focussing on the existing facts.

3. The third principle – reach beyond existing demand; tackle the scope risk of aggregating the greatest demand for a new offering.

4. The fourth principle – get the strategic sequence right; reduce the business model risk by focussing on how to build a robust model that ensures long term profit.

6. The sixth principle – build execution into strategy; focus attention on the motivation and use of the competencies of employees to execute blue ocean strategy, thereby overcoming management risk.

Tata Nano: The People’s Car that Promised to Reconstruct the Automobile Industry

Tata Nano was conceived based on customer insights from an alternative industry – the two-wheeler market and a strategic price was set against alternatives to capture the mass target buyers.

The team complemented its compelling value proposition with a viable profit proposition by pursuing target-based costing to deliver exceptional buyer utility at the strategic price set.

The Different components of the Tata Nano’s people proposition to identify the major causes of the setback it experienced in executing the strategic move, illustrating the importance of matching strong value and profit propositions with an equally compelling people proposition to ensure the successful execution of a blue ocean strategy.

Rightly known to all of us, Facebook is chasing the social networking market. It’s recent acquisition of apps like WatsApp and Instagram at whopping prices is a sort of red ocean strategy -  its full of competitors who would also be happy to acquire these apps. And even after it acquires the leaders, its not clear that Facebook can fend off the competition from likes of LINE, WeChat and dozens of others that are being built, funded and incubated.

But, Google appears to have moved on and decided to focus on the next $10 billion markets that are not yet crowded, dominated or even formed! Google clearly has eyes set on solving transportation via driverless cars and further evidenced by their investment in Uber and acquisition of Waze. Google’s foray into robotics is an epic example of blue ocean exploration.

The Commitment, trust, and voluntary cooperation are not merely attitudes or behaviors. They are intangible capital. When people have trust, they have heightened confidence in one another’s intentions and actions. When they have commitment, they are even willing to override personal self-interest in the interests of the company. If you ask any company that has created and successfully executed a blue ocean strategy, managers will be quick to rattle off how important this intangible capital is to their success.

Similarly, managers from companies that have failed in executing blue ocean strategies will point out that the lack of this capital contributed to their failure. These companies were not able to orchestrate strategic shifts because they lacked people’s trust and commitment. Commitment, trust, and voluntary cooperation allow companies to stand apart in the speed, quality, and consistency of their execution and to implement strategic shifts fast at low cost.