All about Swachh Bharat Cess - FAQs

The Hon’ble Finance Minister Shri Arun Jaitley while presenting Union Budget for the year 2015-16 on 28th February, 2015 had introduced a new cess to be named as Swachh Bharat Cess to be levied and collected on taxable services. Unfortunately, the manner in which the legislation has been introduced, it has created mess out of cess and is prone to lots of litigations. If the government is serious about ‘ease of doing business, then it must immediately issue clarification on various issues. The objective of this article is to identify various issues/queries relating to Swachh Bharat Cess (SBC) and try to clarify the same in simple language in FAQ format.

Kindly note that subsequent to writing of this article by the author, the Central Government has issued Notification No. 23, 24 and 25/2015-ST dated 12-11-2015 and has clarified some of the issues raised in this article.

An enabling provision was incorporated in the Finance Act, 2015 vide Chapter VI to empower the Central Government to impose a Swachh Bharat Cess on ALL or ANY of the taxable services at a rate of 2% on the value of such taxable services. Section 119(2), which is the charging section of the Act, is reproduced below:-

“(2) There shall be levied and collected in accordance with the provisions of this Chapter, a cess to be called the Swachh Bharat Cess, AS SERVICE TAX on all or any of the taxable services at the rate of two per cent on the VALUE of such services for the purposes of financing and promoting Swachh Bharat initiatives or for any other purpose relating thereto.”

Thus, the objective of the levy is to finance and promote the Swachh Bharat initiatives of the Central Government, which is a dream project of Prime Minister Shri Narendra Modi. Undoubtedly, the objective of CLEAN INDIA is holy and pious and needs to be supported by every Indian. The cleanness is directly associated with hygiene and health of the residents and promotes international image of the nation.

2. Whether SBC is chargeable on import or manufacture of goods, like done earlier for Education Cesses?

No, SBC is not chargeable on goods. Unlike education cesses, the levy has been subjected only on taxable services. The rationale behind the differentiation between goods and services is not known, especially when dirt, pollution and environmental damages are mainly attributed to manufacturing activity, industrialization and relatively more directly related with goods than services. Hence, the levy is not based on principles of equality and the service sector has been discriminated and penalized for no fault of theirs. Yet, the parliament is constitutionally empowered to legislate and enforce the same.

3. What is the date of implementation of SBC?

The Central Government was empowered under sub-section (1) of Section 119 of the Finance Act, 2015 to appoint a date for the implementation of SBC. The Central Government has issued Notification No. 21/2015-ST dated 06-11-2015 to implement SBC from November 15, 2015. The reason for implementation during festive season and from the middle of the month is unknown especially when the government could have appointed the date anytime after 14th May, 2015 when the Act received the assent of the President of India.

5. A ‘Cess’ is a ‘tax on tax’. Do we need to calculate SBC @ 0.50% on the amount of service tax like we were earlier doing for calculating Education Cess and SHE Cess?

No, unlike surcharge, which is a ‘tax on tax’, every cess need not necessarily be a ‘tax on tax’. In the Indian context, the Hon’ble Supreme Court, in a ruling in Shinde Brothers Vs. Commissioner, Raichur reported in 1967, said that ‘‘the word cess means a tax and is generally used when the levy is for some special administrative expense’’ citing various examples suggesting the name of the cess explains the object. Thus, cess is a tax which can be collected in any manner but to be utilized only for purposes specified at the time of levy.

The new provision, as quoted above at point 1, clearly says that the levy of SBC shall be @ 2% on the VALUE of such services. So, unlike education cesses, which were levied not on value of services but on service tax thereon, SBC is not a tax on service tax. Thus, SBC @ 0.50% should be calculated on the same value upon which service tax is calculated.

7. Whether SBC is levied on all or selected services?

The Central Government was empowered to impose the new levy on either all the taxable services or on few services. According to some media reports, it was expected that the government may impose SBC @ 2% only on few services which are contributing maximum share of service tax (like telecommunication services). However, the Central Government has not specified any particular service(s) which are chargeable to SBC. The taxable services, except below as notified vide Notification No. 22/2015-ST dated 06-11-2015 are leviable to SBC:

In other words, the following types of services are not chargeable to SBC:-

8. What is the significance of the phrase “all or any of the taxable service” used in the charging section 119(2)?

Covered separately in article titled ‘Whether the Levy of SBC is challengeable? Yes, it seems to be...’

9. Whether SBC needs to be charged separately in invoice, like education cesses?

NO!! Upon strict interpretation of law, there is no need to charge, collect, account or pay SBC independent of service tax. The entire tax can be charged and paid @ 14.50%. The plain reading of the charging section states that SBC shall be levied and collected ‘as service tax’. The bifurcation of service tax and SBC can be easily done at the end of the department. In fact, CBEC has not yet notified separate accounting code for SBC.

Having said that, to avoid unnecessary disputes, it is advisable to charge SBC separately after service tax as a different line item in invoice. It can be accounted and treated similarly to Education cesses. If distinct accounting code is not notified, it can be paid in the main code and if distinct accounting code is notified, it shall be paid in newly notified code.

Note: The point has been answered differently at Q7 of FAQ issued by CBEC on 14-11-2015. Also, at Q8, the FAQ has provided the accounting code for SBC as follows:

10. Whether reverse charge is applicable on SBC?

Yes, if a person is liable to pay service tax under reverse charge, then SBC shall also be paid under reverse charge, because the levy is on ‘taxable value’ and not on the person liable to pay service tax. In case of reverse charge u/s 68(2), the liability has been simply shifted from service provider to service receiver without any change in gross tax liability. Also, according to section 119(5) of the Finance Act, 2015, the provisions of Chapter V and the rules made thereunder are applicable to SBC. Thus reverse charge created u/s 68(2) which is a provision under Chapter V is made applicable to SBC. The service tax and SBC shall be treated equally for all practical purposes as they are one and same. By use of the words, ‘as service tax’ in the charging section itself, the legislation has made it abundantly clear that SBC is nothing but service tax with the only difference that the proceeds shall be used only for Swachh Bharat initiatives.

11. What is the effective rate of service tax on services subject to abatement or valuation rules? 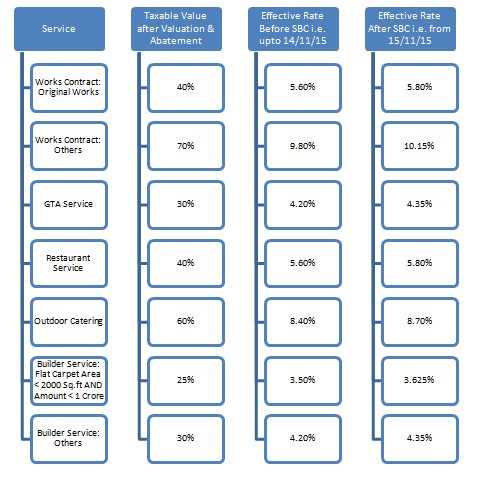 12. The moot question is whether Cenvat Credit is available on SBC?

Most of the subject experts are of the view that since SBC is not specifically covered under Rule 3 of Cenvat Credit Rule, 2004, cenvat credit is unavailable, unless Rule 3 is amended to this effect. With due respect, the author differs in opinion and is of the view that cenvat credit can be availed on SBC. However, unless the government clarifies the issue and allow cenvat credit, the same would be subject to litigation. The issue requires detailed analysis and may be taken up in subsequent write-up.

Note: This point has been answered differently at Q14 of FAQ issued by CBEC on 14-11-2015. As clarified by CBEC, the SBC is not integrated in the Cenvat Credit Chain. Therefore, credit of SBC cannot be availed. Further, SBC cannot be paid by utilizing credit of any other duty or tax. The FAQ issued by CBEC can be downloaded from: http://www.cbec.gov.in/resources//htdocs-cbec/press-release/faq-sbc.pdf