All about Income Tax

∂    Tax is a compulsory payment made to government for services it provides us.

∂    Income is a return on investment monetary/ nonmonetary or significant/insignificant.

The definition is inclusive i.e. a person includes,

(i) Individual - The term individual means only a natural person, i.e., a human being. It includes both males and females. It also includes a minor or a person of unsound mind. But the assessment in such a case may be made under section 161(1) on the guardian or manager of the minor or lunatic. In the case of deceased person, assessment would be made on the legal representative.

(ii) HUF - "Hindu undivided family" has been defined under the Hindu Law as a family, which consists of all males lineally descended from a common ancestor and includes their wives and unmarried daughters.

(b) Any corporate incorporated by or under the laws of a country outside India, i.e., any foreign company

(d) Any institution, association or body, whether incorporated or not and whether Indian or non-Indian, which is declared by a general or special order of the CBDT to be a company for such assessment years as may be specified in the CBDTs order

(iv) Firm - A partnership is the relation between persons who have agreed to share the profits of business carried on by all or any of them acting for all. The persons who have entered into partnership with one another are called individually partners and collectively a firm.

(v) Association of Persons (AOP) - When persons combine together for promotion of joint enterprise they are assessable as an AOP. In order to constitute an association, persons must join in a common purpose; common action and their object must be to produce income.

Body of Individuals (BOI) It denotes the status of persons like executors or trustees who merely receive the income jointly and who may be assessable in like manner and to the same extent as the beneficiaries individually. Thus co-executors or co-trustees are assessable as a BOI.

(vi) Local Authority - The term means a municipal committee, district board, and body of port commissioners or other authority legally entitled to or entrusted by the Government with the control or management of a municipal or local fund.

Assessment Year [Sec 2(9)] Its a period of 12 months commencing from 1st April of each year & ending on 31st March of following year. Its a period during which assessee income of previous year is assessed.

Previous Year [Sec 3] - Its a period of 12 months commencing from 1stApril of each year & ending on 31st March of following year immediately preceding assessment year. Its a period during which income is earned by assessee.

Income earned in one year will be assessed in immediate next year.

(a)   Income of Non Resident from shipping.

(b)   Income of a person leaving India permanently or for a long period.

(d)   Income of a person trying to alienate his asset with a view of avoiding tax. 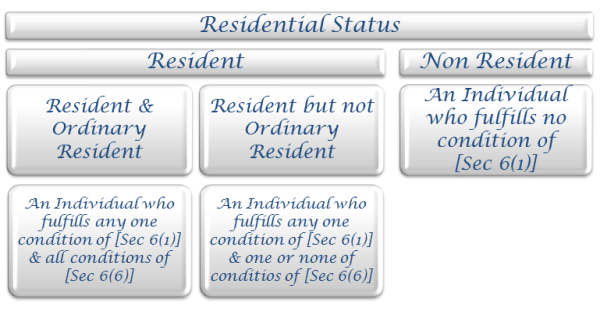 i. An individual must be in India for atleast 182 days during previous year.

ii. An individual must be in India for at least 365 days during 4 years.

The following are exemption for condition of [Sec 6(1)] ii

a.   An Indian citizen leaving India for employment.

b.   An Indian citizen leaving India as a crew member.

c.   A person of Indian origin@ coming on a visit.

@A person is deemed to be of Indian origin if he or either of his parents or any of his grandparents was born in Undivided India.

Identifying the incomes which can be considered for computing Taxable Income

(b)     Income from House Property