A Failure is never the end of the road


Happy Republic Day to All. Here I am, sitting to write this article, on 26th January, 2012, the 63rd Republic Day of India. At the outset, let me tell you, writing this kind of article is not my cup of tea so don’t know whether I will be able to do Justice to this concept provided by  Pulkit Gupta(He is master at these kind of Articles).I am simply writing this as I love cricket.

We all talk about and admire the famous personalities, their achievements and their success. Here, I am about to write an article on, a little known Cricketer, who don’t boast of even 1% of the record of someone we deeply admire “Sir Sachin Ramesh Tendulkar”, but there is a lot that we can learn from him. This is about his journey from “Humiliation” to “Triumph”. He is “Hrishikesh Hemant Kanitkar”. 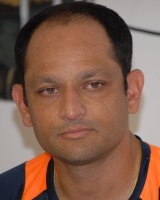 Let’s check out some facts about him.

Hrishikesh Kanitkar's name will forever be linked with his winning boundary off Saqlain Mushtaq in fading light in India's memorable victory over Pakistan at Dhaka in January 1998, when the team chased a 300-plus target in the Independence Cup final. That, however, was one of the few highlights of his international career, which included two Tests and 34 one-day internationals.

He has achieved the ultimate domestic triumph with his third team, Rajasthan other two being Maharashtra and Madhya Pradesh respectively. Kanitkar had moved from his native Maharashtra to Madhya Pradesh, where he played as a professional for two seasons. Both Maharashtra and MP let Kanitkar go for the same reason: they wanted to blood young players (Or may be they thought he was not good enough).

But as they say…”When going gets tough, tough gets going”. Hrishikesh Kanitkar is not exceptionally talented or gifted as many other cricketers but follows great work ethics supported by his Calmness, Grit, Determination and Leadership abilities. He has a very calming presence on his surroundings. The way he bats, the way he leads his side out on the field, the way he stands in the middle, even the way he answers questions from the media. Everything he does is composed and collected.

Kanitkar is not the first professional to lead Rajasthan. For two seasons - 2004-05 and 2005-06 - Ajay Jadeja was the captain. When he left, Rajasthan were relegated to the Plate division. The team was not united, self belief in the players were missing. Kanitkar’s arrival changed it all. Taking a team like Rajasthan, and also his own stature, from rock bottom to the very top, is simply rising like “A Phoenix from the Ashes”. One could see what it meant to him to lift the Ranji Trophy for the first time after 16 years of first-class cricket. And this is the man who now has lifted the Ranji Trophy for the second straight year as Rajasthan Captain. Quite an achievement.

Now there is a lot that a student can learn from this person:

Many students face this kind of situation when their near and dear ones start doubting their abilities due to few failures to deliver the goods. Just the way Maharashtra and M.P. did with Kanitkar, but with his grit and determination he came up roses and showed that a failure does not mean it, is the end of the road. Never judge and underestimate the abilities of a person based on few failures. Never write off a person who has failed because he is the one who has experienced the true pain of a failure.

He is a person from whom students can learn that you need not always be exceptionally talented to be successful, even an average student who has tasted failures quite a few times can come up trumps with his hard work, perseverance and dedication .

So I request all those who suffered many failures to take a leaf out of “Hrishikesh Kanitkar’s” book and rise like“A Phoenix from the Ashes” because “A failure is never the end of the Road”.

Now ending this write up with few lines in my beloved Hindi.

(PROUD TO BE AN INDIAN)


Category Others, Other Articles by - CMA. CS. Sanjay Gupta