A returning NRI should know and understand various aspects of Foreign Exchange Regulations (FEMA), Indian Taxation and Banking Regulations in order to rearrange his financial affairs in India and outside India.

Foreign currency, foreign security or immovable property acquired, held or owned by an individual while he/she was abroad, or inherited from a person who was a resident outside India, can be continued to be owned even after his/her return to India for permanent settlement. There is no specific provision on movable assets like jewellery, motorcar and personal household effects.

There is no Income-tax in India on a foreign income merely because it is remitted to India during that year.

The golden rule of FEMA is, “All capital account transactions other than those permitted are prohibited while all current account transactions other than those prohibited are permitted”. India is still not close to full capital account convertibility though returning Indians enjoy certain concessions in relation to existing overseas assets 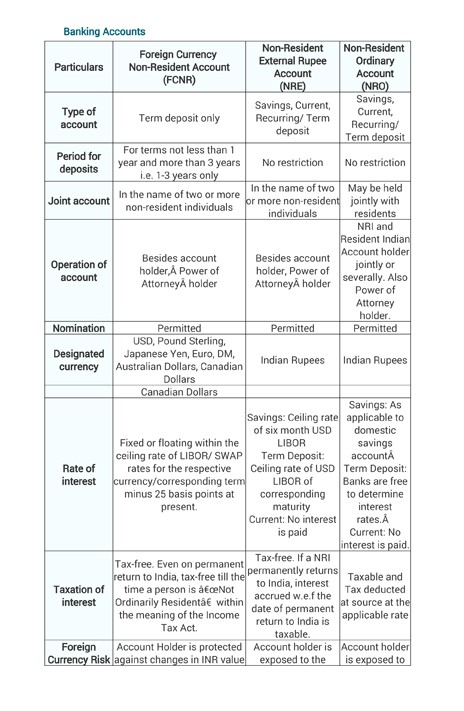 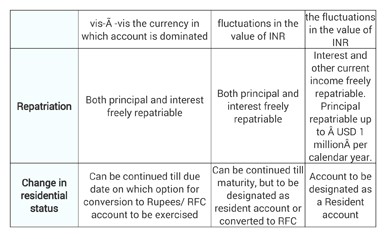 o A Returning NRIs, on becoming residents are free to open and maintain such accounts with authorised dealers.

o The funds held in RFC are fully repatriable and also denominated in Forex.

o Funds in RFC accounts can be remitted abroad for any bona fide purpose of the account holder or his dependants.

Returning NRI is required to inform all the companies, funds etc. as to change of residential status from NRI to Resident.

1. Interest on Non Resident External Account (NRE) and Foreign Currency Non-Resident Account (FCNR) [Section 10(4)(ii)] is Exempt in the hands of a person who is a Person Resident outside India as per section 2(w) of FEMA, 1999 and definition of 'Non-Resident' under Income Tax is not relevant for this sub section.

2. Income in respect of Interest, premium on redemption, other payment on notified securities, bonds, certificates and deposits. [Section 10(15)(i)].

3. Interest paid by schedule banks to Non Resident or to a person who is not ordinarily resident on RBI approved foreign currency deposits (i.e. RFC deposits) is exempt (s. 10 (15) (iv) (fa)). The exemption, in respect of RFC account, continues till such time as the account holder continues to be “Resident but Not Ordinarily Resident”.

5. Pension: If you are likely to receive pension from your former employer after you return to India, it may be liable to tax in India subject to provisions of Double Taxation Avoidance Agreement between India and the country from which you are receiving it.

6. NRI's are also allowed to file exemption for the assets brought by them to India or assets acquired by such money. Up to seven years from the day of they return to India, they are exempted for they assets.

7. The investment should be made in each of the file in such a manner that the amount of taxable income is kept below exemption limit, which at present is Rs. 50,000.

8. Another important area of tax planning to be adopted by a returning NRI is to make investments in bank fixed deposits as also in NSCs in such a manner that each member of his family gets deduction upto Rs. 15,000 per year under the provisions of Section 80L.

9. Every returning NRI must adopt tax planning carefully so as to avoid clubbing of the income of his spouse or daughter-in-law or minor children with his income.

10. An important aspect of tax planning to be adopted by a returning NRI is to make investment in Relief Bonds so that the entire income is exempt from income tax under Section 10(15)(iic) of the I.T. Act.

11. Likewise, he can make investment in tax-free 6½% Savings Bonds of the RBI.

12. Likewise, an NRI can make investments through the help of well-known brokers in shares of reputed companies so that there is security along with liquidity of investment and the dividend income is eligible to exemption under Section 10(34) from income tax.

13. If there is any taxable income, say on account of rental income or investment in non-banking deposits, etc., then the tax incidence can be reduced through investments in PPF, NSCs, Life Insurance premiums, specified and notified infrastructure bonds, units, etc. under Section 88 where 20% or 15% rebate of income tax is allowed upto a maximum investment of Rs. 1,00,000 per tax-payer.

14. Earlier, a very safe and sound avenue for returning NRIs was investment in 8 per cent Relief Bonds as the interest was completely tax-free for the period of the bond, namely five years. From 1.3.2003, however, these have been discontinued. But they can be bought through the Stock Exchange.

15. Where an NRI is interested in having a house, he can invest his funds in the purchase or construction of a self-occupied residential house, the income of which will be nil for income tax purposes. Further, he can even borrow moneys from his relative and get a deduction on interest upto Rs. 1,50,000 every year from any other taxable income. The above account of tax planning to be adopted by an NRI gives the most important aspects of tax planning to achieve a zero income tax level.

i. Assets located outside India of Non-resident (NR) / Resident but Not Ordinary Resident (RNOR) are exempt from Wealth Tax.

About authors
Naveen & Akhila both are pursuing CA course.
You can reach us on naveencaaspirant@gmail. Com