1. Functionality for Aadhaar Authentication and e-KYC where Aadhaar is not available, has been deployed on GST Common Portal w.e.f. 6th January, 2021, for existing taxpayers. All taxpayers registered as Regular Taxpayers (including Casual Taxable person, SEZ Units/Developers), ISD and Composition taxpayers can do their Aadhaar Authentication or e-KYC on GST Portal. This is not applicable for Government Departments, Public Sector Undertakings, Local Authorities and Statutory Bodies.

2. What is Aadhaar Authentication or e-KYC

a) If Aadhaar is available, the Primary Authorized signatory and 1 person who is Proprietor/Partner/Director /Managing Partner/ Karta of the entity registered can go for the Aadhaar Authentication. 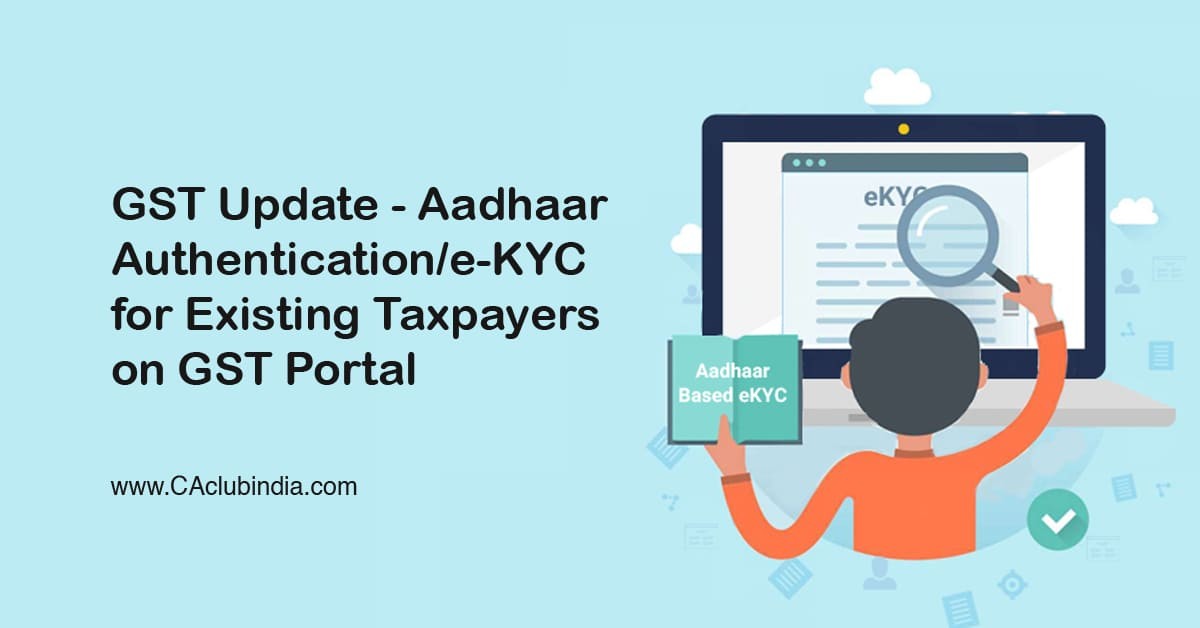 b) In absence of Aadhaar, they can upload any of the following documents to undergo e-KYC:

3. How to do Aadhar Authentication/ e-KYC on Portal

a) When an existing registered taxpayer would login, a pop-up with Question will be shown “Would you like to authenticate Aadhaar of the Partner/Promotor and Primary Authorized Signatory “ with the two options “Yes, navigate to My Profile” and “Remind me later”.

b) If taxpayer clicks on “Remind me later” pop up will be closed and user can navigate anywhere on the GST portal.

Note: If same person is Primary Authorized Signatory and Partner/Promoter, Aadhaar authentication is only required to be done for that person.

d) On the My profile page, in addition to SEND AADHAAR AUTHENTICATION LINK, UPLOAD E-KYC DOCUMENTS option would also be displayed to taxpayer from where they can upload the e-KYC documents on Portal. In this case, the process of e-KYC authentication would be subject to approval of uploaded e-KYC documents by Tax Official.