The Finance Minister Smt. Nirmala Sitharaman chaired the 38th GST Council Meeting today i.e. December 18, 2019. The meeting was also attended by MOS for Finance  Sri Anurag Thakur. The major decisions that were taken in the council meeting are as follows:

3. Grievance redressal committees will be constituted to address the general problems of the taxpayers at zonal and state level with both CGST and SGST officers and including certain representatives.

4. The GST Council fixed a uniform tax rate of 28 percent on state as well as private lottery. The change will be in effect from March 2020. The current rate on the same was 12 percent.

5. E-way bill for those who haven't filed GSTR-1 for 2 tax periods shall be blocked.

6. ITC to be restricted to 10% in respect of invoices not reflected in GSTR-2A.

7. Standard procedure for officers to be issued in respect of action to be taken in cases of non-filing of GSTR-3B.

8. Due date of filing GST returns for Nov 19 to be extended in certain north eastern states.

9. The Council also approved various law amendments which will be introduced in Budget 2020

The Council had asked for some suggestions from states on review of the GST rates and GST compensation cess rates on various items. 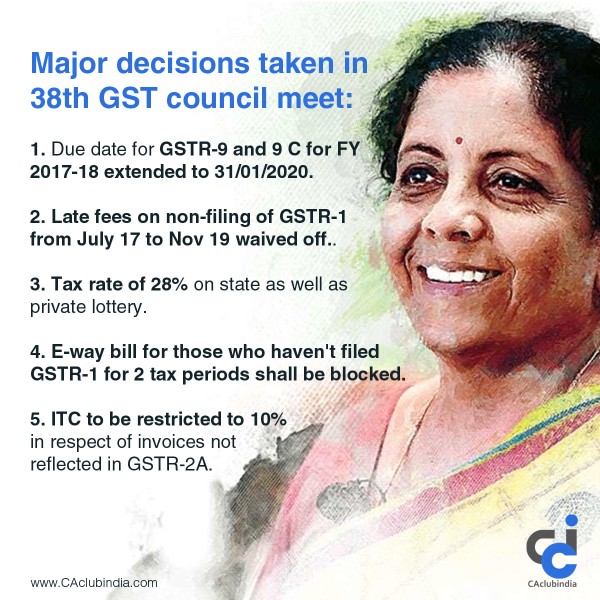 There were great expectations from the 38th GST Council Meeting. People were expecting that the government would scrape off annual returns for the FY 2017-18 as the due date for filing returns i.e. 31st December is approaching near and the offline utility tool for GSTR-9C is not available yet. It was also expected that certain measures will be taken for the proper implementation of New Return System. It was in the grapevine that the government might revise the current tax rates under GST. However, because of the current economic scenario the tax practitioners were expecting no revision in the rates.