A look at the salient features of Jan Lokpal Bill:
1. An institution called LOKPAL at the centre and LOKAYUKTA in each state will be set up

2. Like Supreme Court and Election Commission, they will be completely independent of the governments. No minister or bureaucrat will be able to influence their investigations.

3. Cases against corrupt people will not linger on for years anymore: Investigations in any case will have to be completed in one year. Trial should be completed in next one year so that the corrupt politician, officer or judge is sent to jail within two years.

4. The loss that a corrupt person caused to the government will be recovered at the time of conviction.

5. How will it help a common citizen: If any work of any citizen is not done in prescribed time in any government office, Lokpal will impose financial penalty on guilty officers, which will be given as compensation to the complainant.

6. So, you could approach Lokpal if your ration card or passport or voter card is not being made or if police is not registering your case or any other work is not being done in prescribed time. Lokpal will have to get it done in a month's time. You could also report any case of corruption to Lokpal like ration being siphoned off, poor quality roads been constructed or panchayat funds being siphoned off. Lokpal will have to complete its investigations in a year, trial will be over in next one year and the guilty will go to jail within two years.

7. But won't the government appoint corrupt and weak people as Lokpal members? That won't be possible because its members will be selected by judges, citizens and constitutional authorities and not by politicians, through a completely transparent and participatory process.

8. What if some officer in Lokpal becomes corrupt? The entire functioning of Lokpal/ Lokayukta will be completely transparent. Any complaint against any officer of Lokpal shall be investigated and the officer dismissed within two months.

9. What will happen to existing anti-corruption agencies? CVC, departmental vigilance and anti-corruption branch of CBI will be merged into Lokpal. Lokpal will have complete powers and machinery to independently investigate and prosecute any officer, judge or politician.

10. It will be the duty of the Lokpal to provide protection to those who are being victimized for raising their voice against corruption. 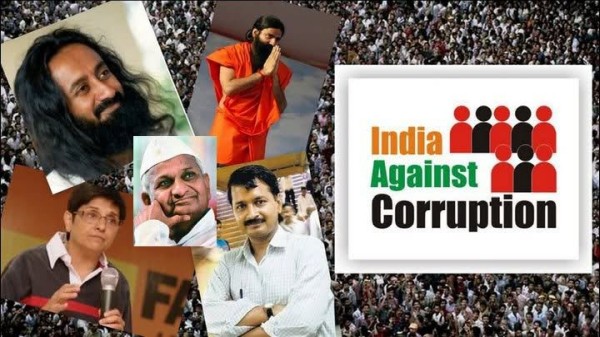 Yes Definately we must come in Large no. to support Anna Hazaare & others supporters who are fighting for US, We must show Unity here just like we showed at the time of Winning WC 2011,,,,,,,,

NICE OF YOU TO POST THIS ARTICLE , LETS SUPPORT THIS MISSION.

I HAVE SOME IDEAS IN THE LINK MENTIONED BELOW WHICH I CAN THINK WE CAN IMPLEMENT , CAN WE TRY TO IMPLEMENT THE IDEASTO TAKE THIS FORWARD . LETS DISCUSS /forum/to-all-members-of-caclubindia-take-a-united-stand-138616.asp

yes we should support

Yes, we must  support Anna Hazare Ji, for the novel cause of making India corruption free .

We all Prospective C.A's & C.A's should support Anna Hazare's campaign against corruption as it affects each one of us in our day to day life................ All the people in Mumbai should show our solidarity with Jan lokpal bill by conducting a CANDLE MARCH.............PLS REPLY ALL

yes we should fight against curruption.. we peoples r always wid baba ramdev and anna hazare..

Nice to see the spirit amongst the people in this website . I hope this surely builds in number.

It is recommended that we all get in touch with the co-ordinators of the movement and join the campaign.

Please spread the word to your family and relatives and make sure the numbers grow.

We are after all standing on the side of truth and I dont think any force can stop us especially when we join with a sincere intention and clear conscience . Please join in large numbers .

Keep up the good work and lets try to make this a national event rathen than also focus on metros . Get people to participate in other cities as well

Please participate in large numbers and lets galvanise our effort.

Can we also start a signature campaign

Lets assist the social activists , They are fighting a battle for us

As Dhirubhai Ambaniji said "The dirty water beneath the ground, is being shown as good water by building fountain on it."

We the emotionally sesitive indians always tend to get carried away if somebody tries to do something which we preview as good but the doer has other intentions. There are many such instances, if u want some of them serach you wil get it if ur welll versed with political environment.

1. Why did Annaji did not raise voice when we the Mumbai cars were brutually Killed In November 2008.

2. Why was annaji silent when farmers in vidharba were suciding daily basis.

3.Why is annaji silent on adultaration racket of petrol and diseal going on in rampant in Maharashtrea.

4. Why annaji is silent of not filing RTI to know the all known sources of wealth of politicians because only he can be safe if he files RTI, If i and  u file RTI we would be dead, Really.

5.Why was he silent on IPL, Commonweatlh games and 2g scam controversy.

6.There are n number of issued on which no one is interested , if he does not gain anything.

Friends I m not going against Respected Grand Fatherly Figure of Annaji, but we should too be aware of what intentions does he have for getting passed lokpal bill,weather he is acting as proxy to someone or some party. In this nation  of ours we need to think from Brains somethimes, because whenever we think from heart we are always cheated which leaves us with bitter memories.

Once agains i urge all of my collegues that why do we need Annaji if we too can do this ourselfs as we are all capable. We can to give suggestion to Ministry of Home affairs, Ministry of Finance on anythig that is bothering us. Why do we need to wait for someone to start then follow him blindly.