IPO of LIC to be brought in through requisite amendments

The government aims at making use of disinvestment proceeds to finance various social sector and developmental programmes and also to infuse private capital, technology and best management practices in Central Government Public Sector Enterprises. Union Minister for Finance and Corporate Affairs, Smt. Nirmala Sitharaman, while presenting the Union Budget FY 2021-22 in Parliament today announced that government has approved a policy of strategic disinvestment of public sector enterprises that will provide a clear roadmap for disinvestment in all non-strategic and strategic sectors.

Fulfilling the governments’ commitment under the AtmaNirbhar Package of coming up with a policy of strategic disinvestment of public sector enterprises, the Minister highlighted the following as it’s main features :

Following 4 sectors to come under it :

2. Non- Strategic Sector : In this sector, CPSEs will be privatised, otherwise shall be closed. 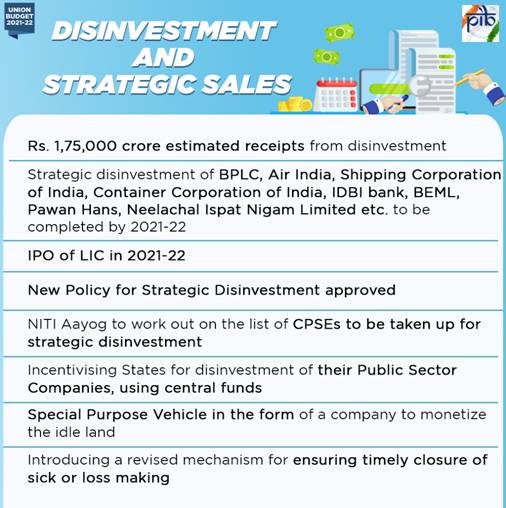 “A number of transactions namely BPCL, Air India, Shipping Corporation of India, Container Corporation of India, IDBI Bank, BEML, Pawan Hans, Neelachal Ispat Nigam limited among others are proposed to be completed in FY 2021-22”, the Minister informed the house. She also added that other than IDBI Bank, a proposal of privatization of two Public Sector Banks and one General Insurance company will be taken up in the year 2021-22. The IPO of LIC would also be brought in through requisite amendments in the session itself.

Further to fast forward the policy, NITI has been asked to work out on the next list of Central Public Sector companies that would be taken up for strategic disinvestment.

The Minister informed the house that she had estimated Rs. 1,75,000 crore as receipts from disinvestment in BE 2020-21 .

The Minister also announced that to similarly incentivise States to take to disinvestment of their Public Sector Companies, an incentive package of Central Funds for them will be worked out. 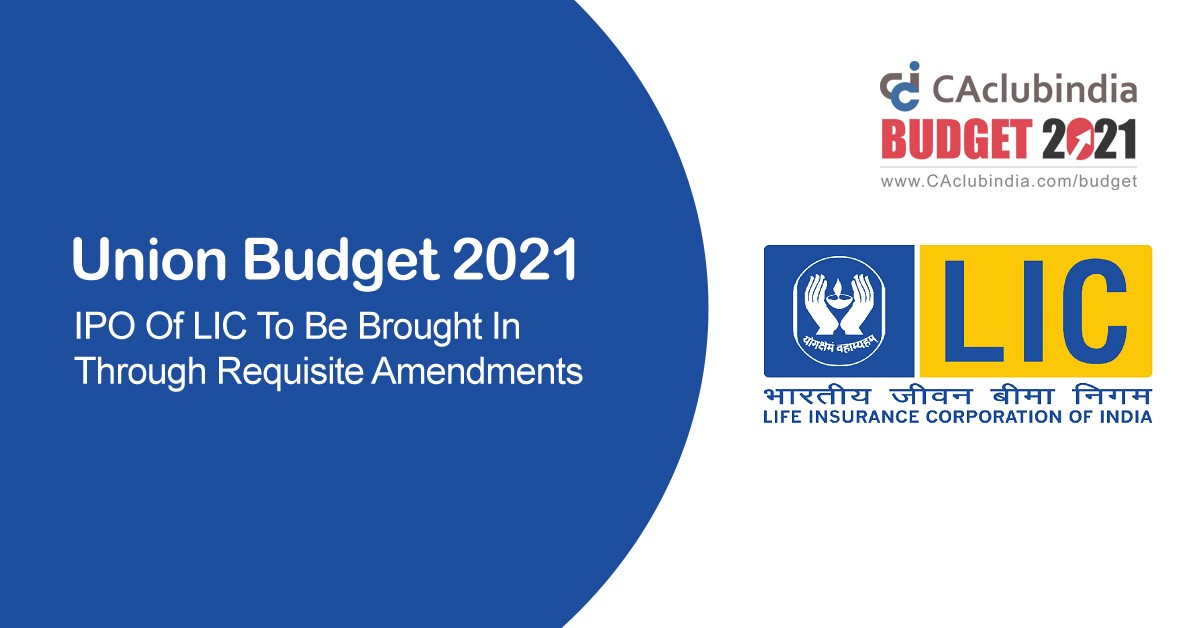 Recognising that Idle assets will not contribute to AtmaNirbhar Bharat and the non-core assets largely consist of surplus land with government Ministries/Departments and Public Sector Enterprises, the Minister proposed to use a Special Purpose Vehicle in the form of a company to carry out monetization of idle land. This can either be by way of direct sale or concession or by similar means.

Smt. Sitharaman also proposed to introduce a revised mechanism that will ensure timely closure of sick or loss making CPSEs.