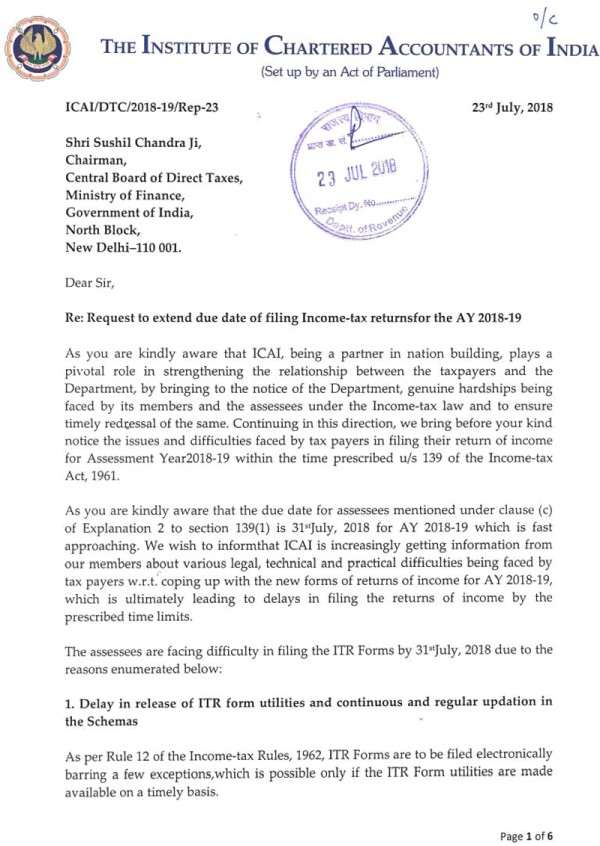 Although the ITR forms for AY 2018-19 were notified on 3rdApril, 2018 vide Notification No. 16/2018, the ITR Form utilities in Java and Excel were released much later in the month of May, 2018(except ITR 1 utility which was released on 14.4.18). Almost one and the half months after the start of the financial year, the ITR utilities were made available for e-filing by the Income-tax department.

As is clear from above, out of the 4 months (for 31st July cases) available to taxpayers for filing ROI, almost half the time (approx. 2 months of April and May) is lost due to non-availability of ITR Form utilities. The delay in issuing the relevant ITR Forms and other utilities necessary for filing the returns results in delay in filing ITR forms as the taxpayers are deprived of the time contemplated by the statute for preparing the return. 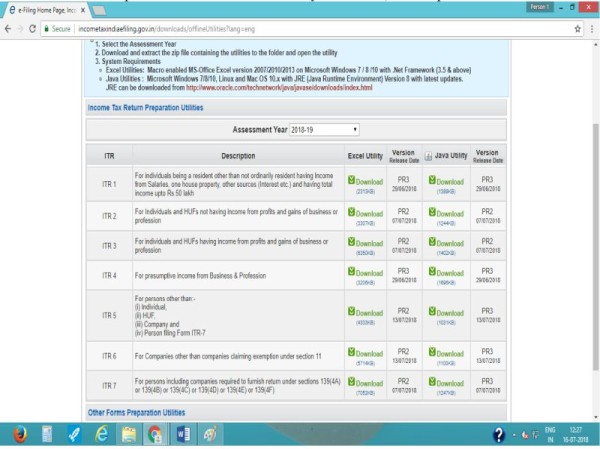 Such updations in schema implies that the changes need to be made in the bulk filing ITR softwares by the vendors supplying such software. These ITR filing softwares are being used by the taxpayers for filing the ITR forms. It, in effect, delays the filing process further as software vendors requires atleast a week’s time to update its software as per changed schema of ITR forms.

2. Delay in updation of TDS credit in Form No. 26AS of the taxpayer and approaching due date of TDS statement filing for first quarter

Further, as per Rule 31 of the Income-tax Rules, 1962, the certificate of TDS in Form 16 (annually) and 16A (quarterly) are to be issued by the deductor to the deductee by 15th June of the financial year immediately following the financial year in which the income was paid and tax deducted and within fifteen days from the due date for furnishing the statement of tax deducted at source under Rule 31A respectively. Despite the fact that there are penal provisions for late submission of TDS returns, some deductors fail to submit the same within the prescribed time sometimes due to genuine reasons as well. This leads to non-reflection of TDS credit in the Form 26AS
of the taxpayer.

Generally, most tax payers get their TDS certificates on or after 15th June and the TDS credit in Form No. 26AS get reflected by 15th June or thereafter. It may further be informed that most deductees do not get their Form 16 and 16A on time due to late issue of the same by the deductor (may be due to technical glitches or delayed filings of e-TDS returns) which may lead to delay in ITR form filing. We would like to further inform you that even Reserve Bank of India issues Form No. 16 to their retired employees for Pension in third week of June every year.

Even TDS CPC portal is reportedly running slow resulting in extra time to download the Form No 26AS and with hardly a week’s time left to file ITRs , downloading the same is becoming an issue.

Normally, correct amount of TDS is not reflected, even till the end of June month and hence, the assessees are effectively left with 1 month to file their ITR forms. It is pertinent to note that many assessees have multiple businesses and streams of revenue and in genuine situations, may have to await the proper reflection of tax credits. Also, GST compilation and reporting requires time and effort and has to conform with Form 26AS and follow up with the respective deductors for any inadvertent errors and such correspondences happen only after TDS is reflected and is complete in all respects.

The concern here is :

1. Unless the credits of TDS appear in Form No. 26AS, the returns are generally not filed/cannot be filed due to less credits which will result in tax demand/lower refund;

2. The assessee cannot claim the credits of the amounts not appearing in Form No. 26AS as he does not have TAN of the deductor which is mandatory field for generating valid XML.

We refer to our earlier representation ICAI/DTC/2018-19/Rep-20 dated 4thJuly, 2018 (copy enclosed herewith) submitted to your good office wherein certain issues were reported by ICAI which were being faced by tax payers while filing ITR Forms for AY 2018-19. Some of those concerns like clarification regarding GST data to be filed in the ITR forms and acceptance/uploading of ITR forms containing bank account details of certain co-operative banks still needs a solution. Assessees affected by those concerns are finding it difficult to file their ITR forms.

Section 234F was inserted vide the Finance Act, 2017 to levy mandatory fees amounting to Rs 1,000/5,000/10,000 depending on the time of filing and quantum of income reported for ITRs filed after the due date prescribed u/s 139. This is first year of applicability of the provisions of section 234F. Your goodself may appreciate that even for a delay of one day in filing ITR, the assessee has to incur an additional cost of Rs 1,000/Rs 5,000. This would be very harsh for assessees whose filing of ROI is delayed due to genuine reasons or for assessees having refund or having nil tax liability at the time of filing ITR. An assessee may not even be aware of this mandatory fees u/s section 234F and further, it may deter the assessees from filing ITR after the prescribed date due to incurrence of additional cost of filing ITR form which will be in addition to interest payable u/s 234A for delayed filing of ITR.

As you may be kindly aware, monsoon in India is in full fury currently. Heavy floods are reported in the States of Maharashtra, Uttrakhand, Gujarat and Jammu and Kashmir. Normal life in such States is crippled. Heavy rains throughout the country has damaged the infrastructure and telecommunication lines and also led to internet connectivity issue which is a prerequisite to upload/electronically file the ITRs. In view of the same, assessees have voiced their apprehensions and hardships in meeting the statutory obligations in a timely manner.

6. Issues arising due to first time implementation of GST Law

Credits of Input Tax Credit balance of earlier laws i.e. erstwhile Excise, VAT & Service Tax laws may not being availed in GST law due to system failure at the time of claiming the credits will have a significant impact on the financial statements based on the judgements passed by various High Courts of the Country to increase the deadlines of filing the claims in Form TRANS-1. If the credit is not granted/granted, will surely effect the income/expenses of the assessee.

GST reconciliation with books of accounts and Form 26AS would take significant time & efforts since this being 1st year of implementation of GST law.

We wish to inform you that the due date of filing Quarterly GSTR-1 is 31st July. The assessees and professionals get busy normally during 5th to 10th of very month with GST returns ( monthly GSTR-1 ) and during 15th to 20th of every month for filling GSTR3-B which results in delaying the working of Direct Taxes. GST Department is in process of coming up with modifications of returns which have been filed for rectifications. The dates have not been declared yet, which will also have an impact on the profit and loss account filed and thereby affecting the incomes/profits being reported in the ITR Forms.

In view of the above and in the interest of the nation as a whole, we suggest and request that the due date of filing return of income for assessees mentioned under clause (c) of Explanation 2 to section 139(1) be extended by at least a month from the prescribed date of 31stJuly, 2018 for AY 2018-19.

We are hopeful for a positive consideration of our suggestion.