Kannada is Unique in a few respects.

30 October 2010
Kannada is Unique in a few respects.
1] The first encyclopedia was written in Kannada. This was later translated to Sanskrit under name Shivatatvaratnakara.
2] Kannada is one of the third oldest language of India. (with Sanskrit & Tamil)
3] Kannada is as old as 2000 years.
4] Kannada is 99.99% perfect - logically and scientifically.
5] Kannada writers got 7 Gnana Peetha Awards - highest among all languages
6] Shri VINOBA BHAVE has called Kannada scriptt as QUEEN OF WORLD SCRIPTS - " Vishwa lipigaLa RaaNi - kannada "
7]Kannada is phonetic - you write as you speak
8] When " kaviraja maarga was written ..." kaaveriyimda , godaavarivaregirpa.. " by Amogha varsha nripathumga, English was in cradle & hindi was not born at all.
9] Kannada is the one of the first indian languages for which a foreigner(Rev. Ferdinand Kittel) wrote a dictionary ( Shabda Kosha) in the year 1894.
10] Ragale Saahithya can be seen only in Kannada which is of a rare and different kind of literature.
11] Kannada Chandassu (shatpadis) out pared all other languages.
12]The first record on Kannada language was traced to Ashoka's Brahmagiri edict dated 230 BC.
13]Kannada words were found in Greek comedies of first and second century AD.
14]The first full- length Kannada edict at "Hanmidi" (also known as Halmidi) dated AD 450. The first-ever available literary work is "Kaviraja Maarga" (AD 850), a text of literary criticism during Rashtrakoota dynasty when Amoghavarsha was the king. There are references to many poets and writers such as Sri Vijaya, Kaveeshwara and Durvineeta in the text, which traces the history of Kannada literature even then for over 1,200 years.
15] The "vachana sahitya" tradition of the 12th century is purely native and unique in world literature. It is the sum of contributions by all sections of society.
16] The 15th century saw the advent of Haridasa Saahitya, which made rich contributions to Bhakti literature and Carnatic music.
17] The 16th century composer Kanakadasa's "Ramadhanya Charite" is a rare work on "class struggle" that marked the uninterrupted tradition of the language and its literature.
* Kannada has been developing both as a language and a literature for over 2,000 years and eminently merits recognition as a classical language.
Tracing the antiquity of Kannada, a recently released book titled "Kannada kisigannadi" of Kannada Gelayara Balaga, Bangalore, claims that the term "Karnata" figures in the Mahabharata. Sanskrit "Matachi" in Chandogya Upanishad is the root form of "Midathe." The term "Isila" meaning a town of forts is found in an inscripttion of Ashoka in Brahmagiri in Chitradurga district. Kannada words are found in the Greek comedies of second AD and the Shatavahana king Hala's "Gatha Sapta Shati." 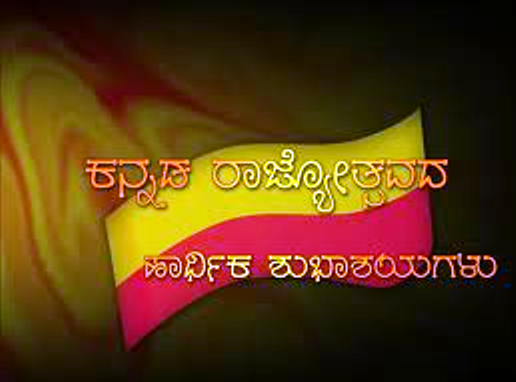 WISH YOU A HAPPY KANNADA RAJYOTSAVA

Telugu language is praised by Kannada King i.e., Sri Krishnadevaraya and who liked Telugu very much and said "Desha bhashalandu Telugu lessa". Every language has its own importance and most of the Kannada Letters are just like Telugu only.

Telugu language is also called as "Italian of the East" as it is a unique language in India which has its own style of writing. Kannada resembles Telugu. If one can read Telugu they also can read Kannada without knowing Kannada.

Every Language has its own importance.

I wrote this just to wish all for tomorrow & i have not said anything about other languages. I apologise if it has hurt you Mr Ahamed

(Guest)
Thankyou so much, learnt so many things abt kannada, Dhanyavadagalu.,

“The Kannada and Telugu alphabets are essentially regional calligraphic variants of a single scriptt. The form of Kannada was strongly influenced by stone carving, and therefore most of the characters are round with straight strokes/wedges. Kannada is second only to the Devanagari scriptt in the number of languages using it in the Indian subcontinent. This scriptt is also used to write the Telugu language (scriptt derived form Old Kannada | Halegannada)”  Visit this link: https://en.wikipedia.org/wiki/Kannada_alphabet.

Kannada scriptt is the origin of the Telugu Script.

There were official efforts in the 1950s and 1960s to unify the two scriptts.  But language chauvinists thwarted such efforts.

In terms of culture and socio-religious practices, Kannada and Telugu share many aspects.   However, Tamil, the mother of all Dravidan languages has its own distinct identity. 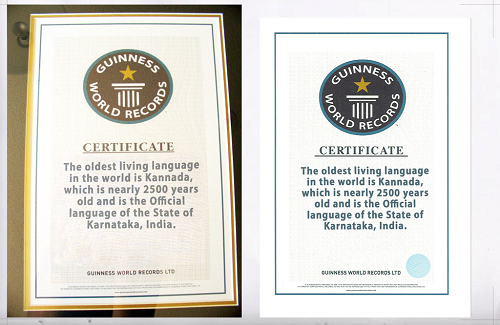 dint knw so many things about our language, thanks 4 sharin. proud to be a KANNADIGA...kannadave sathya,kannadave nithya...