Three world famous magicians were in the bar drinking and boasting about their achievements.

The first one said," During my latest show, I made three women from the audience disappear, it was so convincing that their relatives started panicking, no one could find the trick" .

The second one said, " Hey, that is nothing, during one of my open air shows I made the Municipality building disappear and the entire town was searching for it".

The third one sighed and said," Both of you are so local, I went to Paris and made the Eiffel Tower disappear for a full one hour, it was live on the TV, entire France was searching for the building & no one had a clue".

Just then an Indian walked into the bar and the three magicians suddenly turned quiet, gave each other fugitive glances and started to slip towards the door.

A Bartender watching this got curious and asked one of the magicians, "Hey what happened ? Who is that guy ? "

One of the magicians whispered, " He is the World's greatest magician, he has done the biggest disappearing trick of all times, we are all mere amateurs compared with what he has done. His name is Ramalinga Raju. He has made USD 1.5 billion disappear from his company's balance sheet in front of everyone's eyes, and the entire world is still looking for it ". 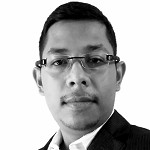 people have praised him when he showed everyone their life..

Life has to be taken in a lighter way Mr.Tharish...!!

I agree with Tharish Chowdhary. And don't understand that what's so nice or funny thing in the story ???

those were not the words i have directly used on u...

i have been seeing many jokes on him recently.. thats why..

sorry if you have taken it offensively..