How can we calculate Adjusted total income when the assesse eligible for 80Gand 80GG deduction...?

I think u want to know that which deduction is to be claimed first, since both sections requies Adjusted Total Income which is computed after reducing all other deductions..

It is simple Law has not prescribed which deduction is to be computed first, therefore best thing would be to make a caculation in both cases and claim the one which is beneficial to the assessee..

It;s like the game of Cricket, "Benefit of Doubts - ALWAYS GOES TO BATSMEN"...Assessees are  batsmen since they have face the bouncers of law makers.

Section 80G provides for deduction from Gross Total Income on account of Donations There are donations which are eligible for Dedction subject to a Qualifying amount (i.e. 10% of (GTI (-) STCG u/s 111A (-) LTCG (-) Deductions of Chapter VI excluding 80G)

In my view, all other deductions should be considered for adjusted total income

Mr Dhiraj many Thanks for explaining 80G in Detail but I asked if 80G and 80 GG Deductions both are avaialable how the computation should be done by means of simultaneous equation is my question? 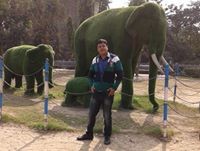 IF u can then pls solve this question

An Assessee has a gross total income of Rs. 200000. (no capital gain and no income from lottery, crossword puzzles etc). He paid Life insurance premium for himself amounts to Rs. 20000, repay house building loan amounts to Rs80000. He also paid medical Insurance premium for his wife amounts to Rs. 12000.He donated Rs. 15000 to Prime Minister’s National Relief Fund, Rs. 3000 to National Children fund, Rs. 9000 to govt. for family planning and Rs. 4000 to local temple notified by the Central Govt.

He also pays rent @  Rs. 1500p.m. for a house occupied for the purpose of his own residence.(Neither he nor his family, owns any accommodation).

Calculate the amount of deduction allowable u/s 80G and 80GG.