The Central Government has consciously adopted a policy to make the processes under the Act, which require interface with the taxpayer, fully faceless. In this backdrop, new schemes for faceless assessment, for faceless appeal at the level of Commissioner (Appeals) and for faceless imposition of penalty have already been made operational. Further, the Taxation and Other Laws (Relaxation and Amendment of Certain Provisions) Act, 2020 has empowered the Central Government to introduce similar schemes for other functions being performed by the income-tax authorities.

It is expected that with these reforms, there would be lesser number of disputes. However, some disputes would still be there. Government has always been striving to reduce disputes and provide tax certainty. Vivad se Vishwas scheme was launched last year to settle pending disputes. Indications are there that the scheme has been a great success. While pending disputes are being resolved or adjudicated, it is important that in future there is less number of disputes from fresh assessments. Hence, in order to provide early tax certainty to small and medium taxpayers, it is proposed to introduce a new scheme for preventing new disputes and settling the issue at the initial stage.

(i) The Central Government shall constitute one or more Dispute Resolution Committee (DRC).

(ii) This committee shall resolve disputes of such persons or class of person which shall be specified by the Board. The assessee would have an option to opt for or not opt for the dispute resolution through the DRC.

(iii) Only those disputes where the returned income is fifty lakh rupee or less (if there is a return) and the aggregate amount of variation proposed in specified order is ten lakh rupees or less shall be eligible to be considered by the DRC.

(v) Assessee would not be eligible for benefit of this provision if there is detention, prosecution or conviction under various laws as specified in the proposed section. 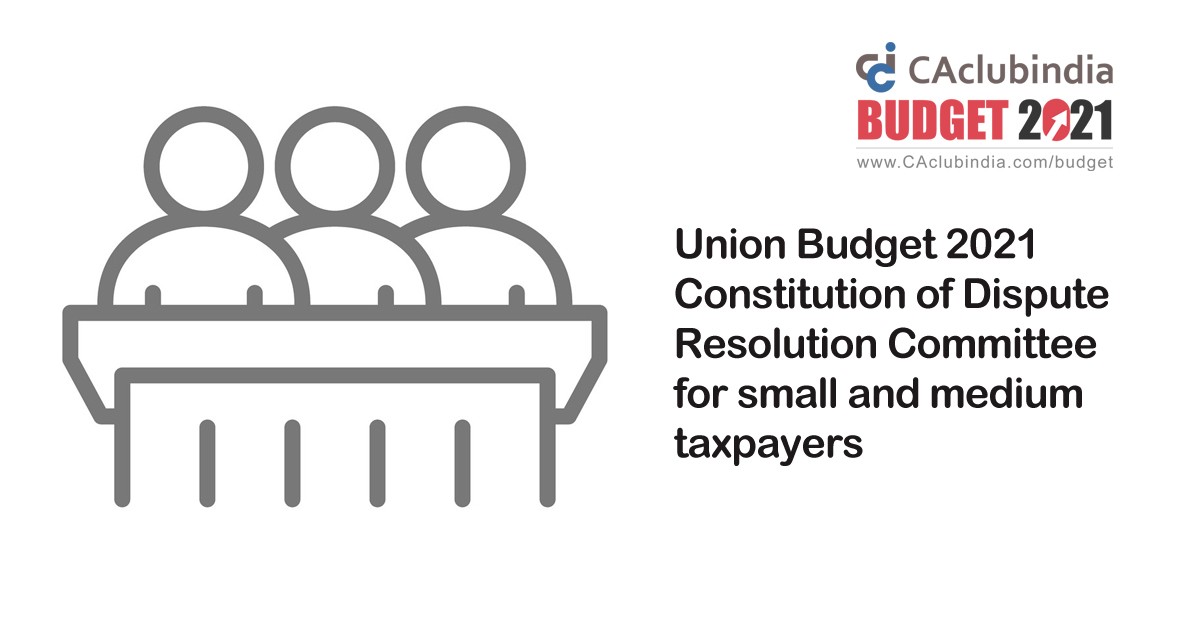 (vi) Board will prescribe some other conditions in due course which would also need to be satisfied for being eligible under this provision.

(vii) The DRC, subject to such conditions as may be prescribed, shall have the powers to reduce or waive any penalty imposable under this Act or grant immunity from prosecution for any offence under this Act in case of a person whose dispute is resolved under this provision.

(viii) The Central Government has also been empowered to make a scheme by notification in the Official Gazette for the purpose of dispute resolution under this provision. The scheme shall impart greater efficiency, transparency and accountability by eliminating interface to the extent technologically feasible, by optimising utilisation of resources and introducing dynamic jurisdiction.The Central Government may, for the purposes of giving effect to the scheme, by notification in the Official Gazette, direct that any of the provisions of this Act shall not apply or shall apply with such exceptions, modifications and adaptations as may be specified in the notification. However, no such direction shall be issued after the 31st day of March, 2023. Every such notification shall, as soon as may be after the notification is issued, be laid before each House of Parliament.

This amendment will take effect from 1st April, 2021