The prestigious PHD Chamber of Commerce and Industry had organised a conference on - Tax Laws & Systems in India- Way Forward. It was a platform to bridge the gap between the taxpayers and the taxmen. CAs and lawyers from reputed organisations such as Deloitte Haskins & Sells, Grant Thornton, Shardul Amarchand Mangaldas & Co. etc were on the panel along with the dignitaries Shri Shiv Pratap Shukla, Honorable Minister of State for Finance, Shri Sushil Chandra, Chairman, CBDT and Shri. Akhilesh Ranjan, Member (Legislation), CBDT.  The representatives discussed the technical glitches in the taxation system and general hardship faced by the taxpayers..

Respected, Shri Sushil Chandra,Chairman CBDT addressed the participants of the event. He threw some light on the reforms made in the system and its impact so far. He said that he has been rectifying the practices in the department by understanding the problems in the taxation systems from the point of a taxpayer as he himself is one.

He said that the first challenge for a taxman is to widen the tax base. To do so, he says is implementing the confidence approach. He wants to change the attitude of the people from fear to faith. He intends to reduce the fearful image of the department in the eyes of the people by introducing a faceless department through the process of digitization.

He believes that the change will begin by comforting the taxpayers and therefore instead of instilling fear he is taking the request approach by sending SMSs to the taxpayers to file the returns. This friendly approach has increased the number of return filings by 1.06 crores! Less than 0.5% returns were scrutinized and here was a 53% increase in the refunds processed in an attempt to spread the message that the department has faith in the returns filed by its taxpayers. 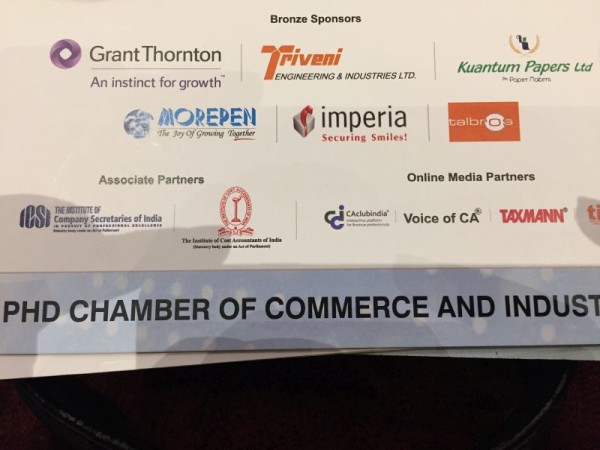 Representatives from various law firms and CA firms were on the panel. They brought forward the practical issues faced by the practitioners and the taxpayers. Both technical and general issues were discussed along with proposed solutions. A few changes that were commonly stated were- simplification of the language of law, reducing complexities by deleting redundant laws, upgrading old laws that are no longer applicable and are causing hurdles in practical implementation, reducing the filing complications, and a reduced tax rate.

Shri Akhilesh Niranjan, Member(Legislative) CBDT were also present in the conference. He gave his inputs on the proposed changes and assured that necessary steps will be taken to make adequate reforms. Both technical and general suggestions will be studied in detail.

The conference was a huge success where both the parties, practitioners and administration came together and brainstormed on how to improve the existing taxation system in India.

To participate in more of such events, check out our events section.