Additional borrowing permission of Rs.30,709 crore granted to 11 States so far, for implementation of One Nation One Ration Card system reform

Tamil Nadu has become the 11th State in the country to successfully undertake “One Nation One Ration Card system” reform stipulated by the Department of Expenditure, Ministry of Finance. Thus, the State has become eligible to mobilise additional financial resources of Rs.4,813 crore through Open Market Borrowings. Permission for the same was issued by the Department of Expenditure.

Tamil Nadu has now joined 10 other States namely, Andhra Pradesh, Goa, Gujarat, Haryana, Karnataka, Kerala, Madhya Pradesh, Telangana, Tripura and Uttar Pradesh, who have completed this reform. On completion of One Nation One Ration Card system reform, these 11 States have been granted additional borrowing permission of Rs.30,709 crore by the Department of Expenditure. State wise amount of the additional borrowing permitted is as under: 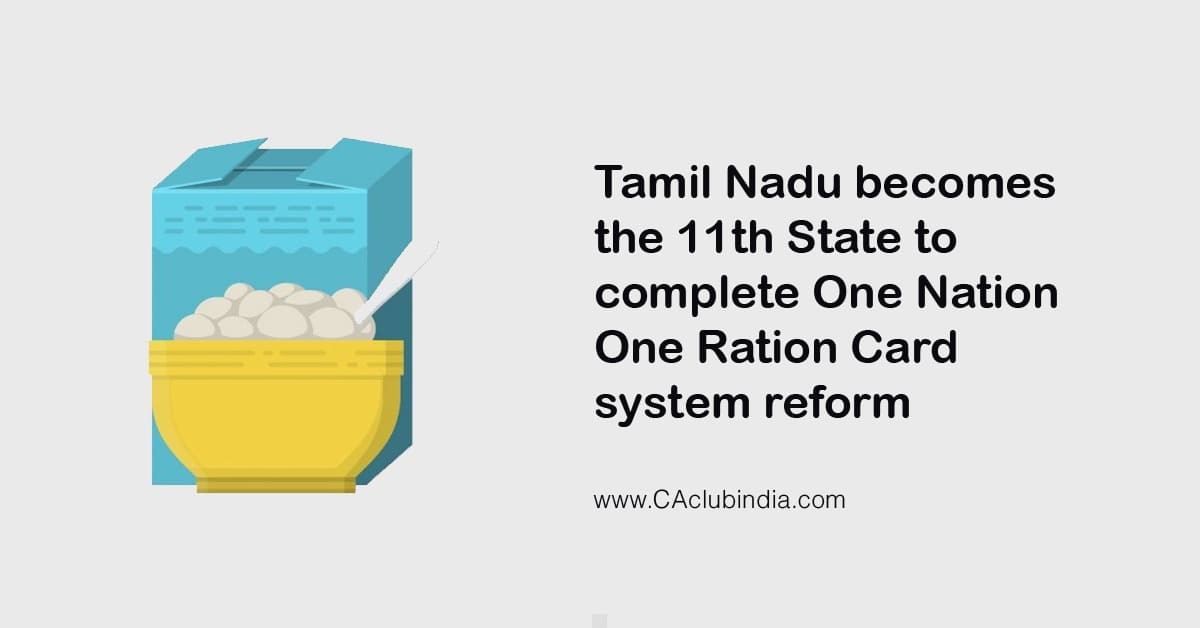 One Nation One Ration Card System is an important citizen centric reform. Its implementation ensures availability of ration to beneficiaries under National Food Security Act (NFSA) and other welfare schemes, especially the migrant workers and their families, at any Fair Price Shop (FPS) across the country.

The reform especially empowers the mirgatory population mostly labourers, daily wagers, urban poor like rag picker, street dwellers, temporary workers in organised and unorganised sectors, domestic workers etc, who frequently change their place of dwelling to be self reliant in food security. This technology driven reform enables the migrant beneficiaries to get their entitled quota of food grains from any electronic point of sale (e-PoS) enabled fair Price Shops of their choice anywhere in the country.

The reform also enables the States in better targeting of beneficiaries, elimination of bogus/ duplicate/ineligible card holders resulting in enhanced welfare and reduced leakage. Further, to ensure seamless inter-state portability of a ration card, Aadhar seeding of all ration cards as well as biometric authentication of beneficiaries through automation of all Fair Price Shops (FPSs) with installation of electronic point of sale (e-PoS) devices are essential. Therefore, additional borrowing limit of 0.25 percent of the Gross State Domestic Product (GSDP) is allowed to the States only on completion of both of the following actions:

(ii)   Automation of all the FPSs in the State.

In view of the resource requirement to meet multiple challenges posed by the COVID-19 pandemic, the Government of India had on 17th May, 2020 enhanced the borrowing limit of the States by 2 percent of their GSDP. Half of this special dispensation i.e. 1 percent of GSDP was linked to undertaking citizen centric reforms by the States. The four citizen centric areas for reforms identified by the Department of Expenditure were (a) Implementation of One Nation One Ration Card System, (b) Ease of doing business reform, (c) Urban Local body/ utility reforms and (d) Power Sector reforms.

So far 11 States have implemented the One Nation One Ration Card System, 8 States have done ease of doing business reforms, and 4 States have done local body reforms. Total additional borrowing permission issued so far to the States who have done the aforesaid refoms stands at Rs.­­­61,339 crore.