The Economic Survey has observed that in-spite of an unprecedented COVID-19 pandemic and consequential challenges, the industrial and infrastructure sector of Indian economy are on a fast V-shaped recovery path. This strong V-shaped recovery of economic activity is further confirmed in the IIP data. The Economic Survey was tabled in the Parliament today by Union Minister of Finance and Corporate Affairs Smt. Nirmala Sitharaman. 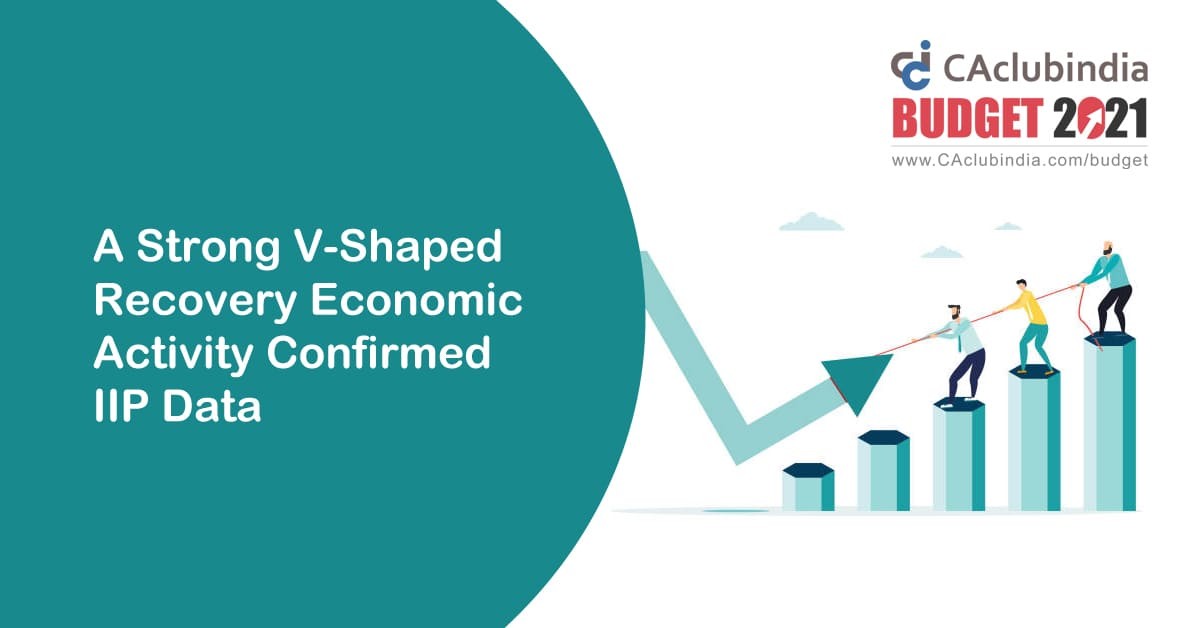 According to Economic Survey, this recovery is expected to be just the beginning of strong era of economic growth of India. Further improvement and firming up in industrial activities, enhanced capital expenditure by the Government, the vaccination drive and the resolute push forward on long pending reform measures are expected to provide the much needed support to the ongoing recovery path. It is pertinent to point out that the reforms undertaken in the country are probably one of the most comprehensive among the major economies of the world.

The Survey notes that the Government of India had announced a remedial and reform package (Atmanirbhar Bharat Abhiyan) comprising of stimulus package of` Rs. 29.87 lakh crore or 15 per cent of India's GDP. This was subsequently backed by initiatives to further strengthen the economy. This stimulus package has specifically given relief and credit support to MSME to fight against COVID-19.  The Economic Survey says that the impact of all the initiatives is beginning to make a positive impact on the economic recovery.

The Survey observes that the Indian economy encountered a “once in a century” crisis due to the COVID-19 pandemic that affected economic activities and consequently impacted the livelihood of billions of people. The industrial sector, was not an exception to this shock, experienced a sharp decline. The economic activity, however, has started recovering as the unlocking process began.

The Economic Survey notes that the Government of India is committed to facilitating a pro-business environment to enable the country to become the global hub of manufacturing and economic activities. Several measures have been taken resulting in the simplification and rationalization of many existing and age-old rules and regulations. The introduction of information technology and single window clearance to make governance more efficient and effective were some of the other concrete steps taken by the Government to improve the environment of doing business.  These initiatives by the Government has resulted in India improving its rank in  Ease of Doing Business (EoDB) Index.

As per the Doing Business Report (DBR), 2020, the rank of India in the Ease of Doing Business (EoDB) Index for 2019 has moved upwards to the 63rd position amongst 190 countries from a rank of 77th in 2018. India has improved its position in 7 out of 10 indicators, inching up to the international best practices. The DBR, 2020 acknowledges India as one of the top 10 improvers, third time in a row, with an improvement of 67 ranks in three years. It is also the highest jump by any large country since 2011.

The Economic Survey states that the Startups have been a big success story in India.  The Government has taken several initiatives to promote the startups.  “Startups” are an outstanding platform for entrepreneurs who have the ability to think out of the box and innovate to conceive products that can create a niche for themselves in a dynamically changing world. To facilitate the growth of startups, the Government had announced “Startup India, Stand-up India” initiative. As on December 23, 2020, the Government of India has recognized a total of 41,061 startups and 4,70,000 jobs have been reported by more than 39,000 startups.

The Economic Survey observes that FDI is a one of the major sources of investment and investment financing drives the economic growth in the country. The FDI flows are also associated with the enhancement of productivity, skills and technology development in the country. The proactive policy measures taken by the government and improvement in the ease of doing business in the country resulted in massive improvement in FDI inflows. Strong recovery in FDI inflows in India even during the COVID-19 times is also a strong indicator of international faith in India's economy growth story and inevitable path of economic recovery that the nation would see.

The Economic survey points that during FY20, total FDI equity inflows were US$49.98 billion as compared to US$44.37 billion during FY19. The similar number for FY21 (up to September-2020) was US$30.0 billion. The bulk of FDI equity flow is in the non-manufacturing sector. There is a reduction in the share of manufacturing in the FDI flows. Within the manufacturing sector, industries like automobile, telecommunication, metallurgical, non-conventional energy, chemical (other than fertilizers), food processing, and petroleum & natural gas get the bulk of FDI equity flows.

The Government of India has undertaken numerous initiatives to empower the MSMEs to tide over the present crisis and become drivers of growth for the Indian economy. Economic Survey notes that with more than 6 crore MSMEs, the sector has been the backbone of the economy and plays a crucial role in employment generation and in contribution to GDP. The sector employs more than 11 crore people, contributes roughly 30 per cent to the GDP, and contributes half of the country's exports helping in building a stronger and a self-reliant India.

The MSME sector was one of the worst hit sectors during the nation-wide lockdown. The Economic Survey notes that several corrective and supportive measures have been taken by the Government to bring the sector on track.

The Economic Survey says that in order to boost industrial production, incentivize manufacturing and enhancing India's exports, the Government of India has introduced the Production-Linked Incentive (PLI) Scheme in the 10 key sectors under the aegis of Atmanirbhar Bharat. The scheme will be implemented by the concerned ministries with an overall expenditure estimated at Rs.1.46 lakh crore and with sector specific financial limits. These schemes and policies are expected to further boost the manufacturing in export sector in the country.

The Economic Survey has highlighted the relevance of continued need for strong fiscal support, incentives to manufacturing infrastructure sector, public private partnerships in appropriate areas and process reforms to further boost all round economic development and growth.