Know all about e-RUPI, the new digital payment instrument

(Prime Minister Shri Narendra Modi on August 2nd launched digital payment solution e-RUPI, a cashless and contactless instrument for digital payment. Prime Minister said that the eRUPI voucher is going to play a huge role in making Direct Benefit Transfer (DBT) more effective in digital transactions in the country and will give a new dimension to digital governance. He said e-RUPI is a symbol of how India is progressing by connecting people’s lives with technology.) 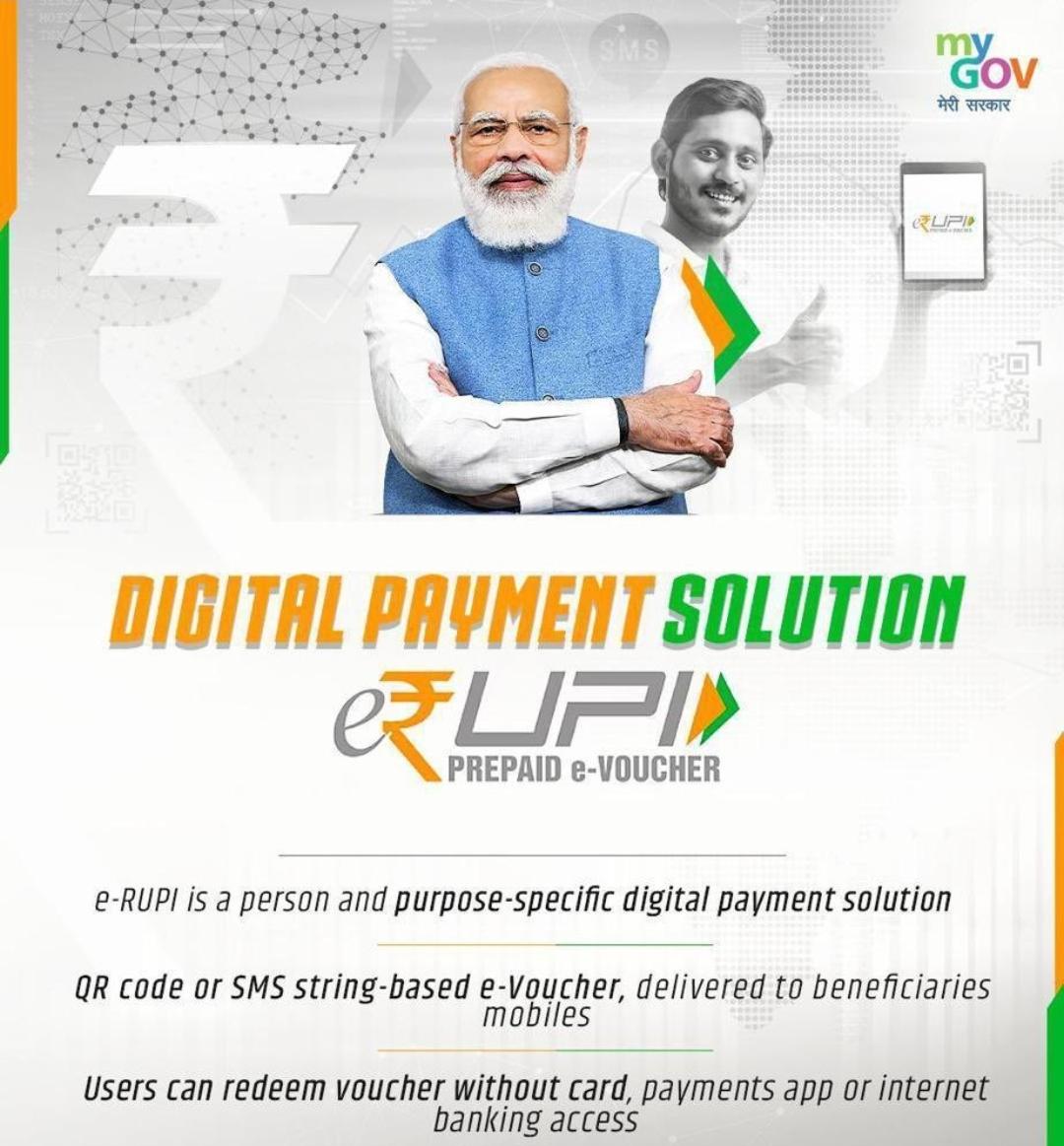 What is e-RUPI and how it works?

e-RUPI is basically a digital voucher which a beneficiary gets on his phone in the form of an SMS or QR code. It is a pre-paid voucher, which he/she can go and redeem it at any centre that accepts it.

For example, if the Government wants to cover a particular treatment of an employee in a specified hospital, it can issue an e-RUPI voucher for the determined amount through a partner bank. The employee will receive an SMS or a QR Code on his feature phone / smart phone. He/she can go to the specified hospital, avail of the services and pay through the e-RUPI voucher received on his phone.

Thus e-RUPI is a one time contactless, cashless voucher-based mode of payment that helps users redeem the voucher without a card, digital payments app, or internet banking access. 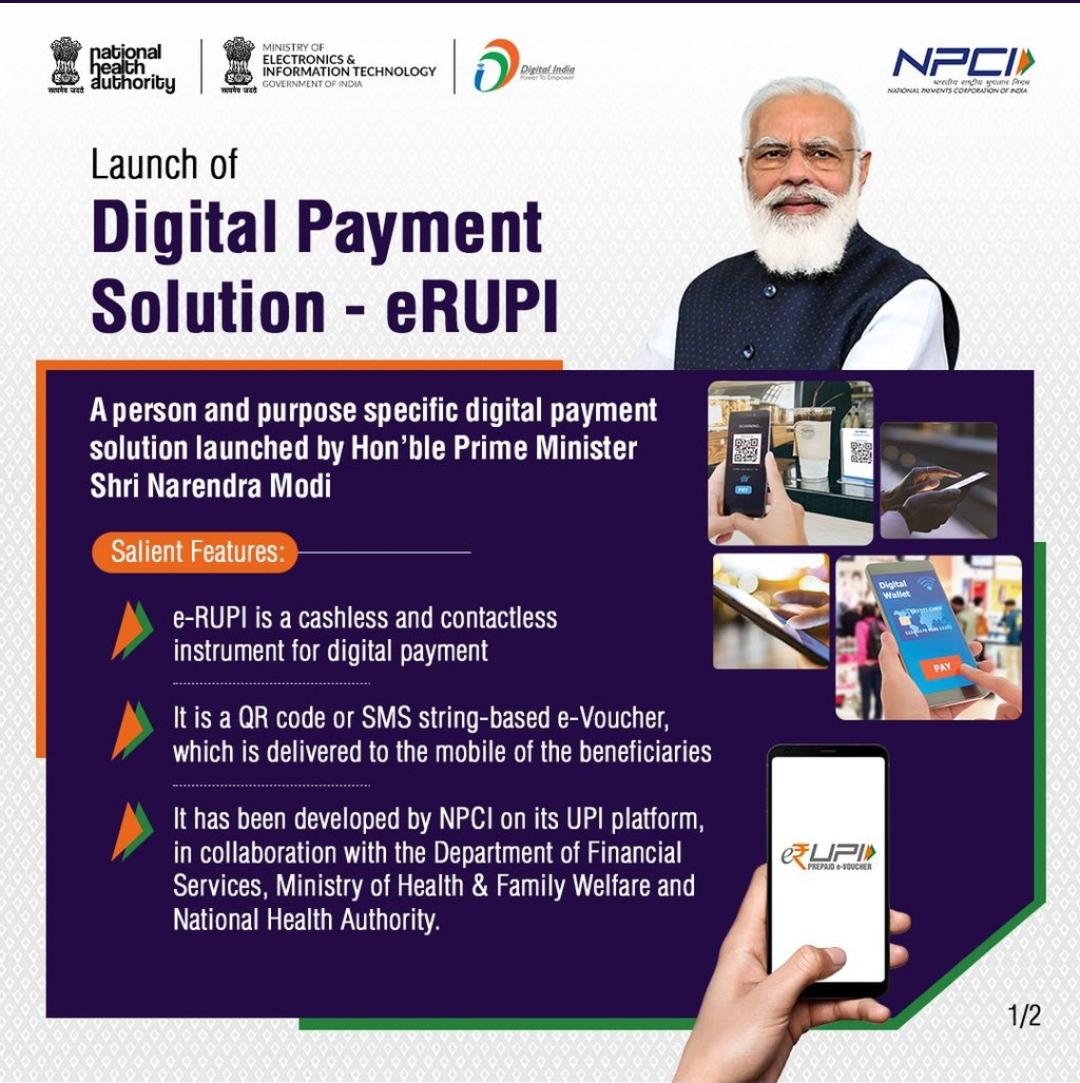 e-RUPI should not be confused with Digital Currency which the Reserve Bank of India is contemplating. Instead e-RUPI is a person specific, even purpose specific digital voucher.

How is e-RUPI advantageous to the Consumer?

e-RUPI does not require the beneficiary to have a bank account, a major distinguishing feature as compared to other digital payment forms. It ensures an easy, contactless two-step redemption process that does not require sharing of personal details either.

Another advantage is that e-RUPI is operable on basic phones also, and hence it can be used by persons who do not own smart-phones or in places that lack internet connection.

What are the benefits of e-RUPI for the sponsors?

e-RUPI is expected to play a major role in strengthening Direct-Benefit Transfer and making it more transparent. Since, there is no need for physical issuance of vouchers, it will also lead to some cost savings as well.

What benefits accrue to the Service Providers?

Being a prepaid voucher, e-RUPI would assure real time payments to the service provider. 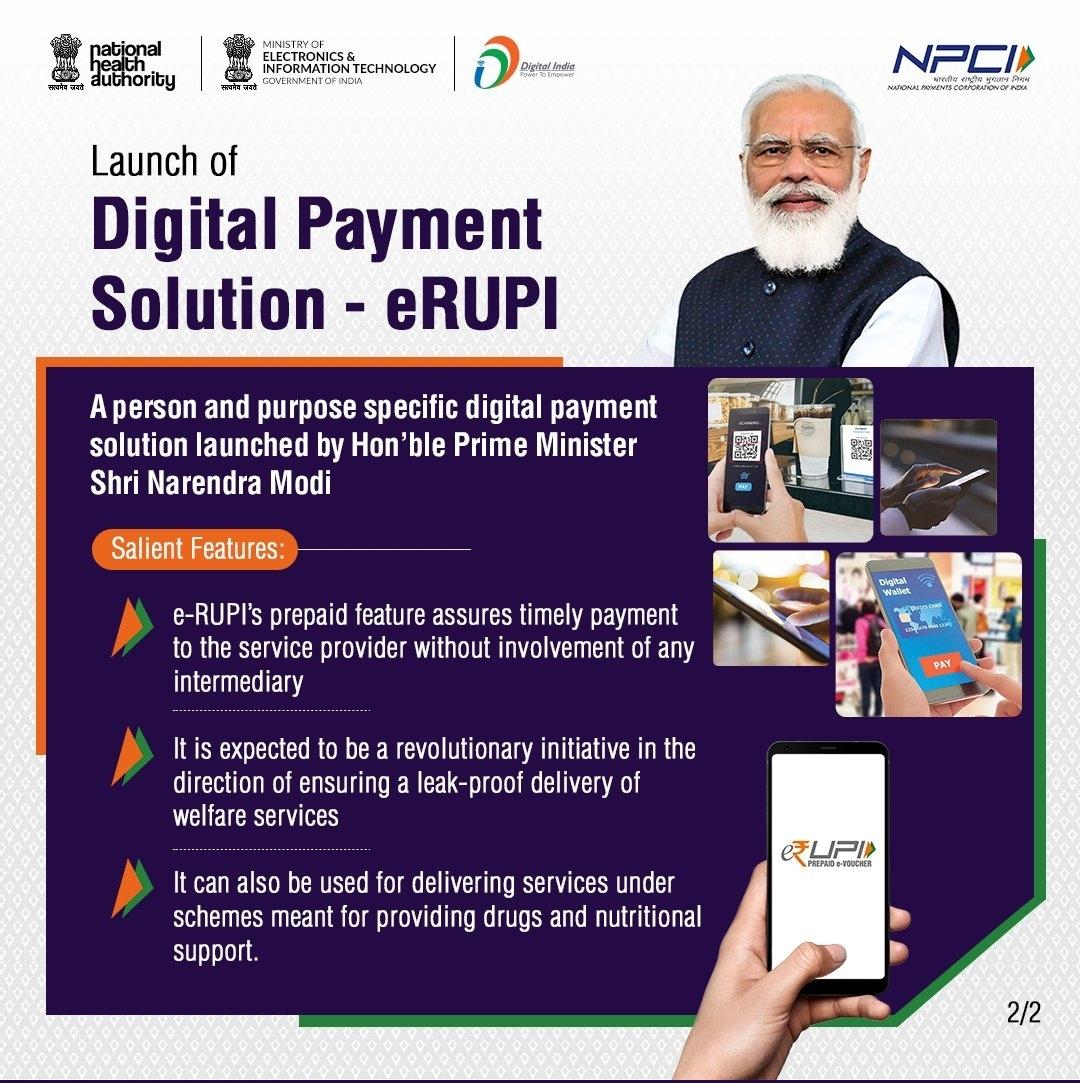 Who has developed the e-RUPI?

The National Payments Corporation of India (NPCI), which oversees the digital payments ecosystem in India, has launched e-RUPI, a voucher-based payments system to promote cashless transactions.

It has been developed in collaboration with the Department of Financial Services, Ministry of Health & Family Welfare and National Health Authority.

More banks and acquiring Apps are expected to join the e-RUPI initiative soon.

Where can e-RUPI be used now?

To begin with NPCI has tied up with more than 1,600 hospitals where e-RUPI can be redeemed.

Experts say, in the days to come the user base of e-RUPI is expected to widen, with even private sector using it to deliver employee benefits and MSMEs adopting it for Business To Business (B2B) transactions.