Improvement in Capital to Risk Weighted Assets, in Both Public & Private Banks

The monetary policy was significantly eased from March 2020 onwards owing to the unprecedented COVID 19 pandemic and remained accommodative in 2020, states the Economic Survey. The Union Minister for Finance and Corporate Affairs, Smt. Nirmala Sitharaman, tabled the Economic Survey 2020-21 in the Parliament today.

The Economic Survey observes that the repo rate has been cut by 115 bps since March 2020, with 75 bps cut in first Monetary Policy Committee (MPC) meeting in March 2020 and 40 bps cut in second meeting in May 2020. Also, Systemic liquidity in 2020-21 remained in surplus while RBI undertook various conventional and unconventional measures to manage liquidity situation in the economy. This year saw improvement in transmission of policy repo rates to deposit and lending rates, as reflected in the decline of 94 bps and 67 bps in Weighted Average Lending Rate on fresh rupee loans and outstanding rupee loans respectively from March 2020 to November 2020. Similarly, the Weighted Average Domestic Term Deposit Rate declined by 81 bps during the same period.

Gross Non-Performing Assets ratio of Scheduled Commercial Banks decreased from 8.21 per cent at the end of March 2020 to 7.49 per cent at the end of September 2020. This has to be seen in conjunction with the asset classification relief provided to borrowers on account of the pandemic, says the Economic Survey.

Further, the Survey notes that Capital to risk-weighted asset ratio of Scheduled Commercial Banks increased from 14.7 per cent to 15.8 per cent between March 2020 and September 2020 with improvement in both Public and Private sector banks. 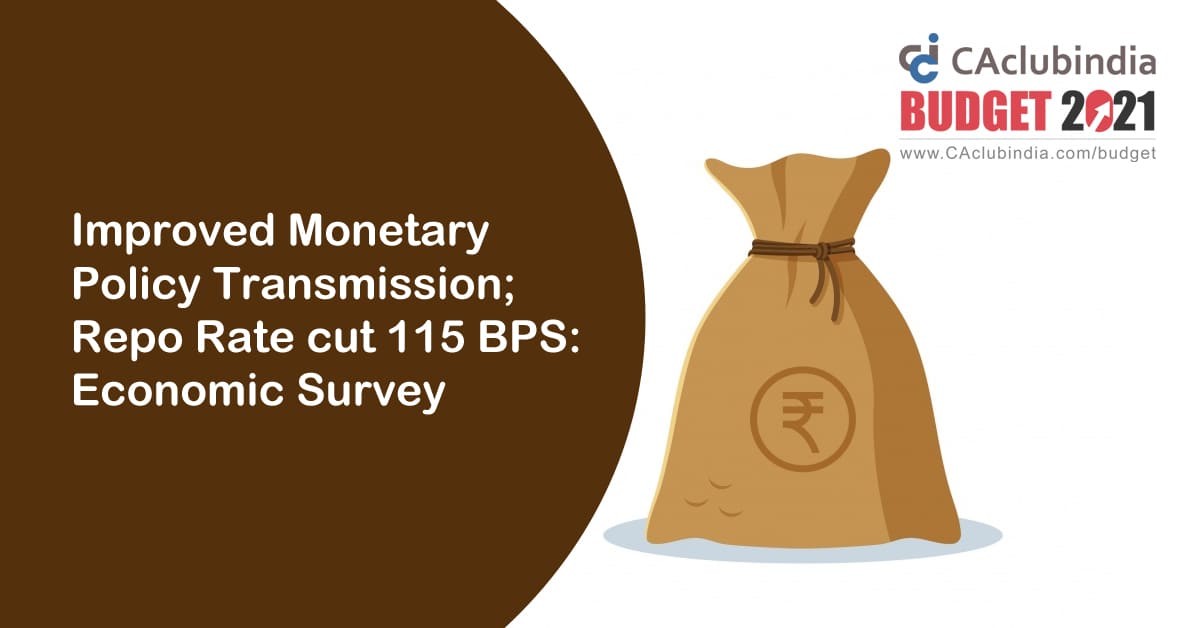 According to the Pre Budget Survey, the recovery rate for the Scheduled Commercial Banks through IBC (since its inception) has been over 45 per cent. Due to the pandemic, initiation of Corporate Insolvency Resolution Process (CIRP) was suspended for any default. The suspension along with continued clearance has allowed a small decline in accumulated cases.

The Survey states that the financial flows to the real economy however remained constrained on account of subdued credit growth by both banks and Non-Banking Financial Corporations. The higher reserve money growth did not fully translate into commensurate money supply growth due to the lower (adjusted) money multiplier reflecting large deposits by banks with RBI under reverse repo. Credit growth of banks slowed down to 6.7 per cent as on January 1, 2021. The credit off take from banking sector also witnessed a broad-based slowdown in 2020-21.