The Ministry of Corporate Affairs has accorded its approval to the Secretarial Standards on Meetings of the Board of Directors (SS-1) and General Meetings (SS-2) specified by the Institute of Company Secretaries of India (ICSI). 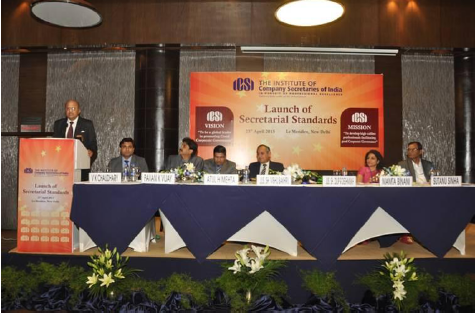 Hon’ble Justice Sh. Dilip Raosaheb Deshmukh, Chairman Company Law Board graced the occasion as the guest of honour. He said that, Itwould definitely result in better corporate accountability and disclosures leading to better value enhancement to stakeholders including shareholder, regulators and international investors.

Shri M. M. Juneja from the Ministry of Corporate Affairs said that in the Secretarial Standards standard practices are articulated, and comprehensively available at one place, adherence to same by the corporate is greatly eased, the stakeholders are clear of what they should expect and what their rights are. The Secretarial Standards would help in ease of doing business, improved governance, confidence building in minds of investors, improved compliance level, ultimately leading to flow of capital in India and achieving the government’s objective of make in India

Secretarial Standards will create enormous confidence in minds of investors particularly fund managers and overseas investors as these investors are very much concerned about good governance practices and sound procedures. Consequently, this will lead to more flow of capital into India, new projects, more modernization and expansion.

CS Mamta Binani Vice-President, ICSI, while talking about the stakeholders’ expectations on the governance issues such as transparency disclosure, timely dissemination of information, uniformity in practices etc., said that Secretarial Standards would act as one of the benchmark in stakeholders’ assessment of companies.

CS Vineet Chaudhary, Council member, The ICSI and Chairman of the Corporate Laws and Governance Committee welcomed the Chief Guest, Guest of Honour and others.