CS Nagendra D Rao, elected as President and CS Devendra V Deshpande, elected as VicePresident of the Institute of Company Secretaries of India for the year 2021 w.e.f. 19th January, 2021.

A Fellow Member of The ICSI, CS Nagendra D. Rao is a Law Graduate from University of Mumbai and has a Bachelor’s Degree in Commerce. He is a Designated Partner and Founder of CS Nagendra D. Rao and Associates, LLP, a firm of Practising Company Secretaries in Bengaluru. He was elected to the Central Council of the ICSI for the term 2019-2022 and served as Vice-President of The ICSI for the year 2020 before being elected as President for 2021.

With over 15 years of experience in Corporate Sector he specializes in Corporate and Securities Laws, Capital Markets Transactions, Business Planning, Mergers & Acquisitions, Financial Restructuring, Strategic Investment, Funds Planning & Arrangement etc. Prior to setting up his whole-time practice, he has also worked in multinational companies. He has been associated with the ICSI for several years now. He was elected to the Southern India Regional Council for two terms viz., 2011-2014 & 2015-2018 and has served as Chairman for the year 2015. Prior to that he was elected to the Managing Committee of the Bengaluru Chapter of the ICSI for the period 2007-2010 and was elevated as Chairman during the year 2009. 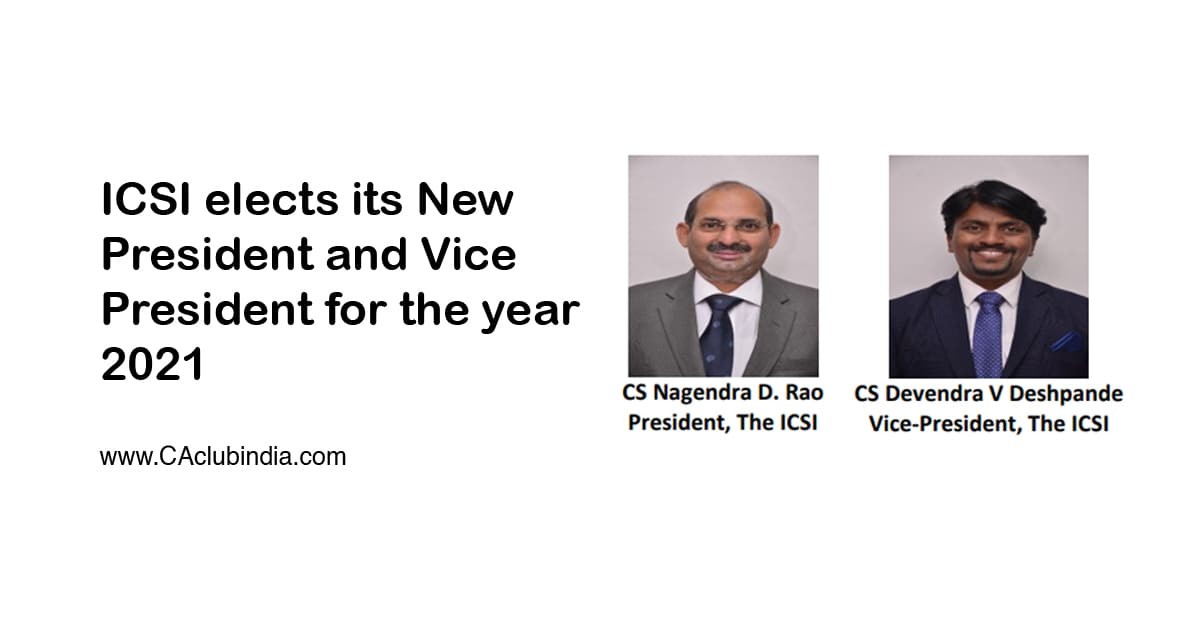 CS Nagendra D. Rao was a member of the Central Taxes, Corporate Laws & GST Committee of the Federation of Karnataka Chambers of Commerce & Industry for the year 2018-19. He was a member of the Corporate Affairs and Taxation Committee of the Bangalore Chamber of Industry & Commerce during the period 2000 – 2004. As a recognition for his outstanding service rendered in the field of education CS Nagendra D. Rao was conferred the title “VIDYA
VIKAS” by Dr. D.G. Shetty Educational Society (R), Dharwad, Karnataka.

A Fellow Member of the ICSI and a Post Graduate in Commerce from Pune University, CS Devendra V Deshpande was elected to the Central Council of the ICSI for the term 2019 - 2022. He was the Chairman of ICSI Centre for Corporate Governance, Research and Training (CCGRT), Mumbai and ICSI Centre of Excellence (CoE), Hyderabad in the 2020. He is a Nominee Director at ICSI IIP. CS Deshpande also headed the Information Technology Committee of the ICSI for the year 2019. He was member of various committees Constituted by ICSI including Executive Committee, Corporate Laws and Governance Committee, Training & Educational Facilities Committee, Placement Committee, PMQ Course Committee, Election Reforms Committee and International Affairs Committee for the year 2019.

He has been actively associated with the Institute since 2004. Elected to the WIRC of lCSI, for the term 2015 – 18, he served as Chairman of Pune Chapter of WIRC of ICSI in the year 2013 and was an active Managing Committee member for the period from 2007 - 2014. CS Devendra V Deshpande has been a practicing Company Secretary since 2004 and
specialises in the field of Corporate Laws, Foreign Exchange Laws, Audits under Company Law and Allied Laws, Secretarial Audit and Corporate Restructuring.