The Institute of Chartered Accountants of India (ICAI) today elected its new President & Vice-President for the term 2020-2021. 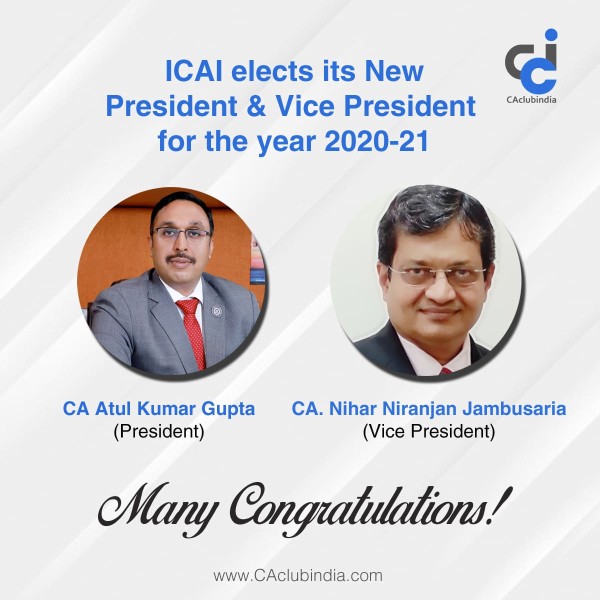 A man with astute intellect and quick understanding and sharp vision, CA. Atul Kumar Gupta has been elected as President of The Institute of Chartered Accountants of India for the term 2020-21 on 12th February 2020. Having served the profession for about two decades, he joined the Central Council of ICAI in 2013 wherein he remained a member for two consecutive terms, i.e. 2013-16 and 2016-19. He got elected as Vice-President in February 2019 for the term 2019-2020.

Widely respected for his strong organizational skills and deep insight in the affairs of the profession, CA. Atul Gupta has immensely contributed to the cause of the profession in the last two Councils. With his commitment, dedication, and service to the profession, he endeavors to take the profession to a newer stand also come up to the expectations of stakeholders consequently.

A commerce and a law graduate by education, CA. Atul Gupta has imbibed a unique perspective to view and critically address the matters. He has led the cause of profession through various committees of the Institute, serving as Chairman of Digital Accounting and Assurance Board, Board of Studies, IT Committee and Indirect Taxes Committee, among others.

He, earlier, has been the Chairman of SAFA Committee on Education, Training & CPD and Director of XBRL India and ICAI-Accounting Research Foundation (ARF) in the past.

As Vice-President of the Institute, CA. Gupta acted as Vice-Chairman of all Standing Committees including Executive, Finance and Examination Committees, besides being the ex-officio member of all Non-Standing Committees and Joint Editor of ICAI Journal, The Chartered Accountant. He is a Director in the Governing Board of Indian Institute of Insolvency Professionals of ICAI.

CA. Gupta is also Vice Chairman on the Board of the Extensible Business Reporting Language (XBRL) India and Director in ICAI Accounting Research Foundation.

With his deep insight into the affairs of the profession, CA. Gupta has always kept the profession on high priority at national and international levels. He has addressed numerous technical meetings and seminars/ conferences and represented the Institute and its professional initiative in the past, including those at Association of Corporate Treasurer, Chartered Institute of Taxation and Financial Reporting Council, ICAEW, Chartered Institute of Public Finance Accountancy, UK and American Accounting Association.

A man with a clear vision and deep understanding of the subject and respect for his down-to-earth approach to the issues at hand among his professional colleagues. CA. Gupta has a surpassing ability to deal with the most challenging situations. Having an exceptional ability to bring out a range of alternative solutions on the table in any given situation, he has to his credit successful closures of many difficult tasks in a time-bound manner. With a straightforward approach to the profession, he has always been concerned about the quality of services and expectations of his professional colleagues and their aspirations. Profusely interested in the brand Indian CA and ICAI, he has always volunteered to act as a bridge between the stakeholders and the Institute.

He symbolizes the transformational perspective which is going to be crucial for the relevance of all economic entities and more particularly regulators so that the transformation addresses the expectation gap while being focal to upholding transparency, probity, and trust as the guiding virtues for the work program of ICAI in times to come.  Being the ardent reformer; he has a holistic grasp on the imperative of digital transformation, the developments taking nationally and globally in regard to accountancy profession and through his experience in public life all over two decades; he intends to metamorphize the overall regulatory perspective as laid under the enabling Act and Regulation governing the Chartered Accountancy profession.

Being thoroughly conversant with the professional concerns and demands of his times, CA Gupta has authored many relevant books and has published numerous articles in leading newspapers, magazines and professional newsletters, and delivered lectures in about 1500 seminars and conferences.

A supporter of putting Indian accountancy profession on global map, CA. Gupta has also passionately represented the profession on various International forums through a number of meetings and conferences and making impeccable thereat.

A blend of erudition, experience, foresight, technical expertise and professional excellence worth emulating and a Fellow Chartered Accountant from Mumbai, CA. NiharNiranjanJambusaria has also been Chairman of WIRC of ICAI in 2004-05.

An altruistic hard-worker bestowed with exceptional organisational, networking, administrative and leadership skills, he has been serving as Central Council member since 2013. CA. Jambusaria has represented ICAI in many important committees constituted by the Government Ministries/ Regulators. He has been nominated as a Member of the e-Commerce Committee formed by the Ministry of Finance and Peer Review Committee of the Central Board of Direct Taxes.

CA. NiharNiranjanJambusaria has made noteworthy contributions in whatever capacity he served the profession, particularly as the Chairman of - IndAS Implementation Committee, ICAI, International tax Committee and various other important Committees/ Board of ICAI. He has also served as a Member of the SAFA Committee on Professional Accountants in Business ( PAIB).

With a focus on innovation and niche enablement, he intends to translate his passion for the inclusive growth of the profession through the transformational agenda that the current paradigm warrants.