Shri Jayant Sinha, Hon’ble Union Minister of State for Finance inaugurated the 66th Annual Function of the Institute of Chartered Accountants of India (ICAI) on February 11, 2016 at New Delhi.

At the outset Shri V. Sagar, Secretary, ICAI welcomed all the dignitaries, the members in the profession and esteemed guests. 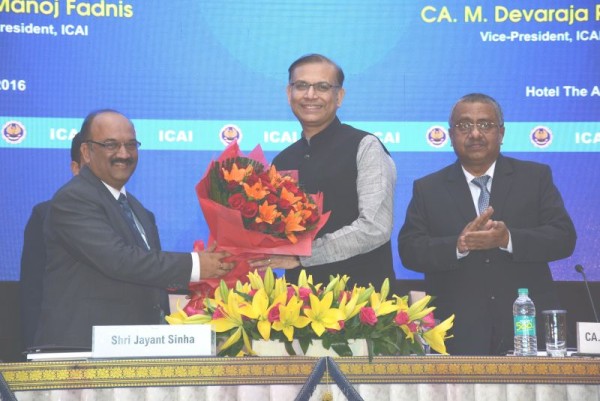 Addressing the function, CA. Manoj Fadnis, President, ICAI thanked all for the encouragement and support.  He briefly highlighted the achievements of the Institute during the year which include association with various Govt. initiatives like Accounting reforms for Indian Railways, Workshop on Black money (Undisclosed foreign income and Assets) and imposition of Tax Act 2015, Pilot Study Project for Coal India Ltd. and alike.

He added “ICAI in its existence of over 66 years following the virtues of Excellence, Independence and Integrity has emerged as an institution of Public Trust. CAs play a critical role in the growth of economy.”

Shri Jayant Sinha , Hon’ble Union Minister of State for Finance complimented ICAI for 66 glorious years of  service to the nation. He said that the CAs have provided their outstanding services to all sectors of the economy with diligence and honesty & that the Chartered Accountancy profession has played a significant role in guiding growth of business and industry in India. The Minister further added that the patriotism, professionalism & sense of duty that Chartered Accountants possess is commendable & urged the CA Fraternity to come together to build India.

While delivering the Vote of thanks, CA. M. Devaraja Reddy, Vice-President, ICAI said “ Chartered Accountancy is an economical professional course to pursue and is the most sought after course in the country. As a result of the education and training imparted during the CA course, today the CAs are recognized as complete business solution providers.” He further added that ICAI is generating qualified Chartered Accountants to meet the present as well as the future needs of the Indian economy.