Venkaiah Naidu, The Vice-President of India along with other dignitaries grace the first hybrid convocation of ICSI which was held on the 18th January, 2021 in Hyderabad. Read the official notification below:

The ICSI organised its first hybrid Convocation on 18th January, 2021, for awarding certificates to approximately 3400 Associate Members and 350 Fellow Members of the Institute, for the year 2020.

The Convocation Ceremony was organized in Hyderabad, in the benign presence of Hon’ble Vice President of India, Shri M Venkaiah Naidu as the Chief Guest. Hon’ble Minister for Home, Prisons and Fire Services, Government of Telangana, Shri Mohammed Mahmood Ali was also present as the Guest of Honour on the occasion. The four Regional Offices of the Institute in Chennai, Kolkata, Mumbai and New Delhi joined the hybrid ceremony virtually.

Congratulating the members, Shri Naidu said “The modern day Company Secretary is a true guide of the Corporate, handholding the Board, taking along the interests of all stakeholders, and most importantly ensuring adherence to the laws of the land in true letter and spirit. As the Indian Economy is moving ahead in its journey to become Atmanirbhar,
professionals like Company Secretaries will inevitably play a key role in reviving and strengthening the economy while holding strong to the values, ethics and morality ingrained in the Indian society”.

Further, the Hon’ble Vice President appreciated the efforts of the institute and said “The translation of the panchayat governance code in regional languages is testament to ICSI's efforts of taking governance to all levels. I commend the ICSI on their unwavering commitment on the academic front as well by signing MoUs with Institutes of repute in the
country especially in Jammu & Kashmir and the North East and spreading the inclusive growth approach”. 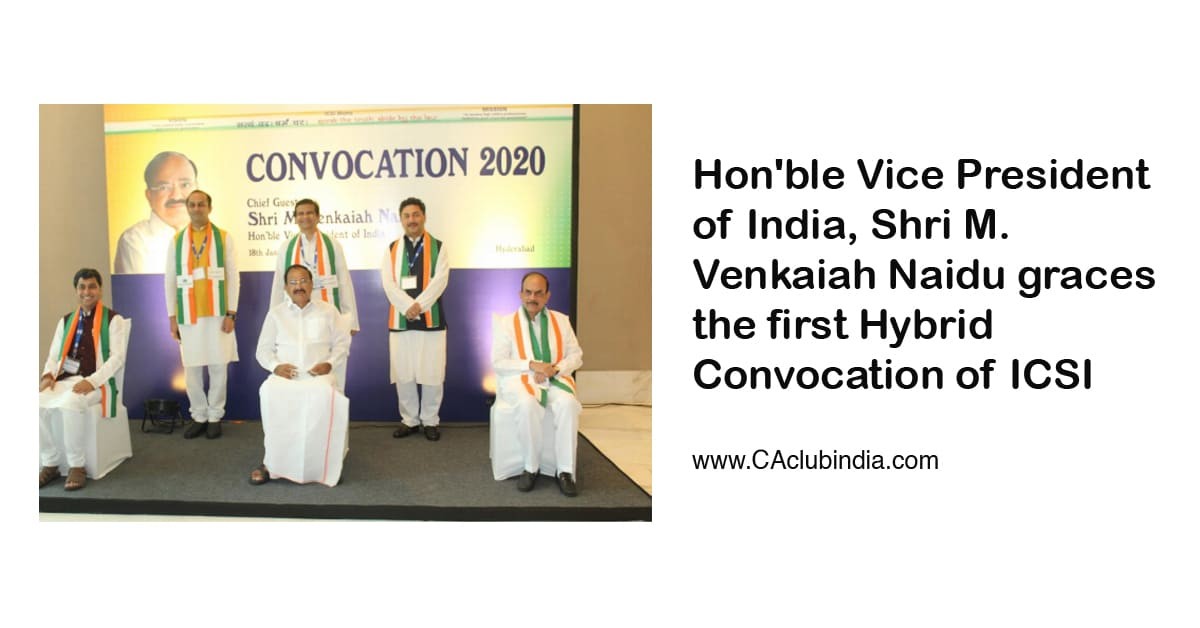 In his address, CS Ashish Garg, President, The ICSI, said “Company Secretaries of 2020 will hold a special place in the history of the ICSI and the country. Notwithstanding the challenges brought in by the pandemic, the batch of 2020 will be looked upon as inspiration for future Company Secretaries in times to come for exploring and embracing the opportunities brought in by the digital revolution in these trying times”.