Adhering to the fiscal targets, the fiscal deficit in RE 2015-16 and BE 2016-17 have been retained at 3.9% and 3.5% of GDP respectively.  While presenting the General Budget 2016-17 in Lok Sabha today, the Union Finance Minister Shri Arun Jaitley said that he has weighed the policy options of either in favour of fiscal consolidation and stability or for a less aggressive consolidation and for boosting growth.  He has decided that prudence lies in adhering to the fiscal targets but while doing so, it has been ensured that the development agenda has not been compromised. 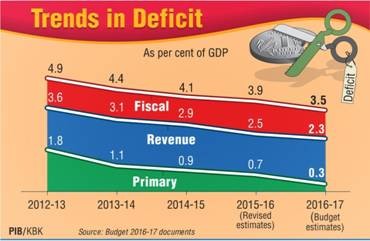