The Economic Survey has called for an active fiscal policy indicating that a push for growth leads to debt sustainability in the Indian context, and not necessarily vice-versa. The Union Minister for Finance & Corporate Affairs, Smt. Nirmala Sitharaman tabled the Economic Survey 2020-21 in Parliament today.

Given the need for fiscal spending amidst the COVID-19 crisis, the Economic Survey examines the optimal stance of fiscal policy in India during a crisis and comes to the conclusion that it is growth that leads to debt sustainability and not necessarily vice-versa. This is because debt sustainability depends on the “Interest Rate Growth Rate Differential” (IRGD) i.e. the difference between the interest rate and the growth rate in an economy. With the Indian context of potential high growth, the interest rate on debt paid by the Indian government has been less than India’s growth rate by norm, not by exception. 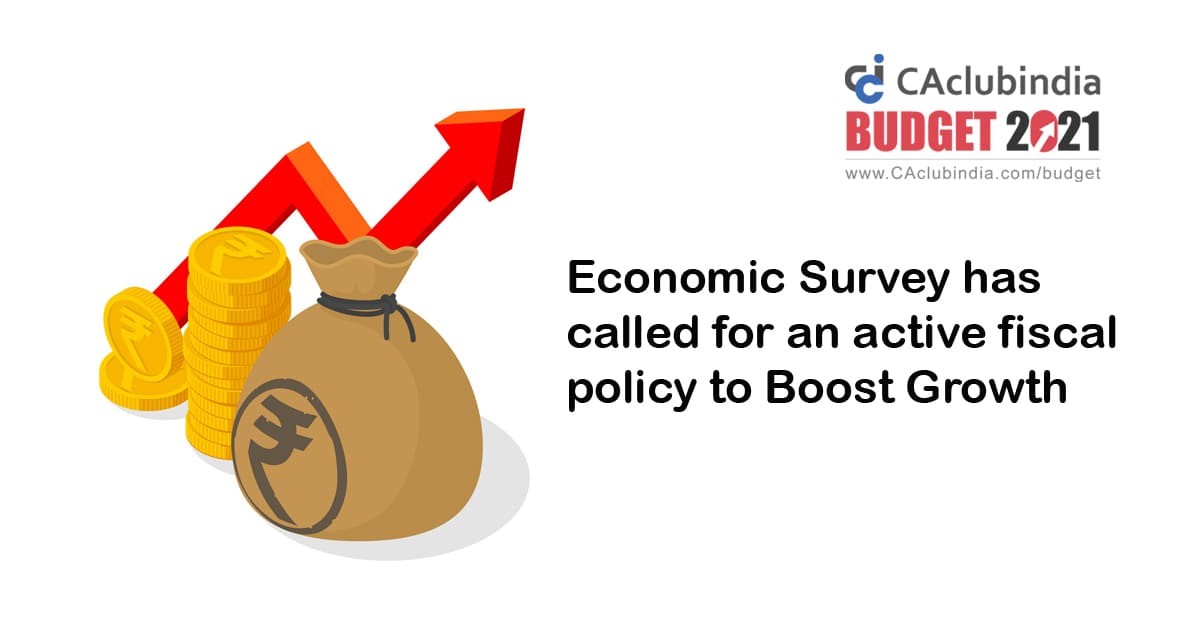 The Survey notes that the phenomenon of a negative IRGD in India, unlike advanced economies, is not due to lower interest rates but much higher growth rates, prompting a debate on saliency of fiscal policy, especially during growth slowdowns and economic crises. With evidence from across several countries, the Survey shows that growth causes debt to become sustainable in countries with higher growth rates, and that such clarity about the causal direction is not witnessed in countries with lower growth rates. By integrating ideas from Corporate Finance into the macro-economics of Government debt a la Bolton (2016), the Survey lays the conceptual foundations to understand why these differences can manifest between high-growth emerging economies and low-growth advanced economies.

The Economic Survey points out that fiscal multipliers are disproportionately higher during economic crises than during economic booms. Thus, as the COVID-19 pandemic has created a significant negative shock to demand, an active fiscal policy can ensure the full benefit of seminal economic reforms taken by the Government. As the IRGD is expected to be negative in the foreseeable future, a fiscal policy that provides an impetus to growth will lead to lower, not higher, debt-to-GDP ratios.

According to the Survey, simulations undertaken till 2030 highlight that, given India’s growth potential, debt sustainability is unlikely to be a problem even in the worst-case scenarios.

The Economic Survey has highlighted the desirability of using counter-cyclical fiscal policy to enable growth, noting that while it is necessary to smooth out economic cycles, it becomes critical during economic downturns. This is because fiscal multipliers which capture aggregate return derived from economy from an additional rupee of fiscal spending, are greater during economic crises than boom. In a country like India with large workforce in informal sector, counter-cyclical fiscal policy becomes even more important, it advised.

The Survey also indicates that a well-designed expansionary fiscal policy stance can contribute to better economic outcomes in two ways. First, it can boost potential growth with multi-year public investment packages that raise productivity. Second, it can mitigate the risk of Indian economy falling into a low wage-growth trap, like Japan.

Further, at a time of excessive risk aversion in the private sector, as seen during an economic crisis, risk-taking via public investment can catalyse private investment, leading to a crowding in, than a crowding out. With the National Infrastructure Pipeline (NIP) already laying out the agenda for ambitious public spending, fiscal policy catering to its funding can boost growth, productivity, generate higher-paying jobs and thereby be self-financing.

While emphasizing that a more active, counter-cyclical fiscal policy is not a call for fiscal irresponsibility, the Economic Survey seeks to break any asymmetric bias created against fiscal policy. Instead, it serves to provide an intellectual anchor for the Government to relax debt and fiscal spending during growth slowdown or economic crisis, till growth picks up in a sustainable manner.