The Institute of Company Secretaries of India (ICSI) organised ICSI Convocation 2015 – Northern Region on 23rd May, 2015 at New Delhi. 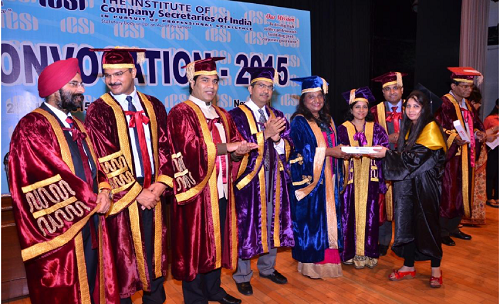 Mrs. Sushma Paul Berlia, Co-Promoter & President, Apeejay Stya & Svran, Group President, Apeejay Education Society, Co-Founder & Chancellor, Apeejay Stya University, in her CONVOCATION ADDRESS, said that we all recognize the critical role that education and good governance play in the development of a nation. Being the prime mover of the progress of a country, it is but a critical role that the young professionals need to play in the development and governance of the corporate sector.India is in the process of fast and radical change, a process which is unstoppable However, Change is occurring at very different speeds in each segment of society. The complexity of the Indian society as embodied in division and subdivision by geography religion, caste,class, gender and employment- calls for a careful monitoring and deftsteering of this process of change. The successful management of this change is the biggest. Challenge of our times. Our response to this challenge will determine the destiny of India as a nation simply cannot fail in this test. Today company secretary is called the governance professionals, and huge responsibility lies upon the shoulders of the person who is working as a company secretary. And I think increasing so in the last decade in India, the Job, the profile, the scope of work, the importance of the responsibilities that the company secretaries handle has grown leaps and bounds.

As we enter an era where we are looking to have a regulatory regime that is more compliant to the practices around the globe, itsimportant for each of these company secretaries that work in India to keep themselves completely updated is to the new regime in India, new compliances, new regulations, and also the various practices around the world, because as more and more companies in India grow, the outreach and the foot print of these companies is becoming global. People are reaching now to boundaries outside of India and for companies to have sort of inter-operability in terms of what are requirements, what are the compliances, the company secretaries have a major role to perform.

CS Atul H Mehta , President, Council of the ICSI in his Presidential Address, congratulated the new members and said that ,“We are entering a world that increasingly rewards individual aspiration and persistence and can measure precisely who is contributing and who is not and It is in this context that this ICSI Annual Convocation-2015 is being held . He advised that, each of the students should consider investing in oneself so as to witness the transformation which will happen in each one. President, ICSI said that, “with this investment which is essentially long term one will gain market appreciation over time. Like companies which practise good governance gain in their value overtime and provide long-term gains in the form of dividends and price-appreciation, members should too govern themselves well. He also added that, “The need to remain credible is the most critical challenge today as words hold out for you, employers, Being credible is nothing else but doing what you say and saying what you do. The ability to distinguish between right and wrong has always been the most challenging assignment in life which is never taught in the classrooms”.

CS Mamta Binani, Vice- President, Council of the ICSI in her address congratulated the new Members “it is our attitude that determines the altitude to which we could reach. Similarly, it is our attitude and not the aptitude that could determine the altitude. Attitude determines the lifestyle of a person and it develops when perception is followed by projection, planning and actioning. Our attitude towards life can have a significant positive impact on shaping our quality of life”. she also expressed that , “a positive (creative) attitude on the other hand, is open, passionate, focused, and has many other attributes that leads you in the direction of creative success. A positive and proactive attitude always leads to success. It is thus, important to develop a positive attitude. She emphasized that clearly defined goals, positive attitude and faith in your capabilities, supported by an untiring commitment and toil could create wonders”.

CS Shyam Agrawal, Council Member, ICSI in his welcome address, congratulated the New Members and said that the new members will be part of a great transition from Company Secretaries to Corporate Governance professionals, New members should recognise failures and obstacles in their path and learn from their mistakes and mistakes of others. They should be ready for a new phase of Professional pursuit has begun as the academic pursuit comes to an end.

CS Vineet Chaudhary, Council Member, ICSI & Programme Director of the Convocation said that “To Excel in the right sense is chasing your professional / personal goals and letting the results take care of themselves, making the process of achievement supreme and making the result irrelevant. He advised the students to perfect the process of performance and not to allow the pressure of the result to choke your performance.

CS N P S Chawla, Chairman, NIRC of ICSI, in his address defined the term “Convocation” which in Latin means 'calling together' and means a group of people formally assembled for a special purpose. He added in common parlance convocation is a ceremony to award degrees to students and honorary graduates. He then congratulated the new members and wished them luck in their professional career and said that they should uphold the values and ideals which is expected from them as members of this prestigious profession.

CS Sutanu Sinha, Chief Executive ICSI, making concluding remarks and proposing a vote of thanks “advised the students that they should take care of performance in whatever they do and the wealth would take care of itself. He reiterated the fact that, “the path to success is through hard work and perseverance.