Central Board of Direct Taxes

The Central Board of Direct Taxes has notified Income-tax Return Forms (ITR Forms) for the Assessment Year 2017-18. One of the major reforms made in the notified ITR Forms is the designing of a one page simplified ITR Form-1(Sahaj). This ITR Form- 1(Sahaj) can be filed by an individual having income upto Rs.50 lakh and who is receiving income from salary one house property / other income (interest etc.) . Various parts of ITR Form-1 (Sahaj) viz. parts relating to tax computation and deductions have been rationalised and simplified for easy compliance. This will reduce the compliance burden to a significant extent on the individual tax payer. This initiative will benefit more than two crore tax-payers who will be eligible to file their return of income in this simplified Form.

Simultaneously, the number of ITR Forms have been reduced from the existing nine to seven forms. The existing ITR Forms ITR-2, ITR-2A and ITR-3 have been rationalized and a single ITR-2 has been notified in place of these three forms. Consequently, ITR-4 and ITR-4S (Sugam) have been renumbered as ITR-3 and ITR-4 (Sugam) respectively.

There is no change in the manner of filing of ITR Forms as compared to last year. All these ITR Forms are to be filed electronically. However, where return is furnished in ITR- 1 (Sahaj) or ITR-4 (Sugam), the following persons have an option to file return in paper form:-

(i) an individual of the age of 80 years or more at any time during the previous year; or

(ii) an individual or HUF whose income does not exceed five lakh rupees and who has not claimed any refund in the return of income,

The notified ITR Forms are available on the department’s official website www.incometaxindia.gov.in 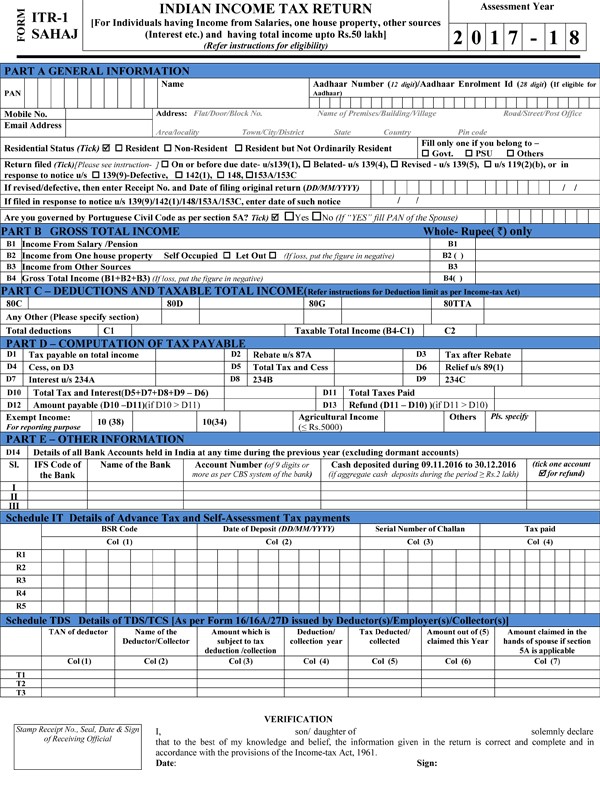