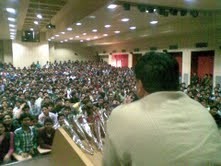 Addressing a gathering of more than 1000 CAs and CA students, Sanjay Singh explained how a team of dedicated CAs is voluntarily helping Aam Aadmi Party in maintaining transparency in its accounts. The team had earlier helped in maintaining records of India Against Corruption (IAC) movement as well. It was only due to the efforts of this dedicated team that not even one finger has been pointed on the accounts of AAP and IAC so far. In order to defame the movement, several politicians had tried their best to raise fake allegations of financial irregularities. But their allegations fell flat when, with the help of this team, details of donations received and expenditure was displayed on the website promptly and updated on a timely basis.

The National spokesperson further explained that AAP was forced to join politics after the Government failed to pass Jan Lokpal Bill even after a nationwide movement took place which made people come out of their homes onto the streets all across the country.

Speaking at the event, National Convener of AAP Arvind Kejriwal shared his experiences from his days when he was the Assistant Commissioner with the Income Tax department. He recalled how he was offered “Sewa” several times which he denied. He appealed to all accounting professionals to raise their voice against any kind of corruption and not to indulge in it in future as well. He acknowledged the profession for its capability to tackle corruption and find out irregularities in accounts put before them for audit.

Mr. Kejriwal also said that today politics is perceived to be for the bad and corrupt only. We use up all our country’s resources to become successful in life and the irony is when it comes to working for the country we say “I hate politics”. He explained that we need to change this kind of mentality and work towards the success of the nation as well.

Concluding the event, he thanked all the Chartered Accountants and students for supporting the Janlokpal movement and the recent agitation against gangrape in Delhi.